The drama by Lynn Nottage about dissatisfaction and divisiveness in a Pennsylvania factory town will visit 18 small cities in the weeks before the midterm election. 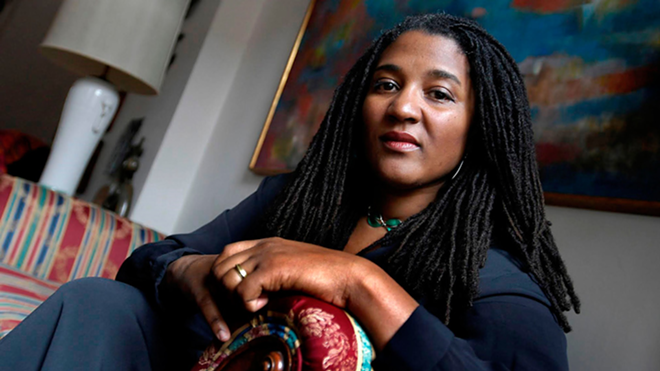 New York's Public Theater, which debuted Lynn Nottage's Sweat in 2016 before it went on to Broadway in 2017, has announced that its Mobile Unit — which until now has been focused solely on New York — will launch a tour of the Pulitzer Prize-winning play to 18 upper Midwest (mostly) smaller cities and towns between Sept. 27 and Oct. 13.

The play, set in a Pennsylvania factory town, "tells the story of a group of friends who have spent their lives sharing drinks, secrets and laughs while working together on a factory floor. But when layoffs and picket lines begin to chip away at their trust, the friends find themselves pitted against each other in the hard fight to stay afloat," according to the Public Theatre website.

In 2016, Nottage came to Cincinnati to participate in Opera Fusion: New Works — a collaboration between the University of Cincinnati’s College Conservatory of Music and the Cincinnati Opera — workshopping of her and composer Ricky Ian Gordon's operatic adaptation of her play Intimate Apparel. It is about an African-American seamstress living in a boarding house who creates exquisite lingerie for clients ranging from a wealthy white woman to an African-American prostitute. CityBeat interviewed Nottage at the time. The opera is planned for the Metropolitan Opera/Lincoln Center Theater’s New Works initiative.

The Ohio stops for Sweat are in the northeast portion of the state: Ashtabula on Sept. 28, Akron on Oct. 2 and Ravenna on Oct. 3. It begins in Erie, Penn. on Sept. 27 and goes on to visit Meadville, Penn.; Macomb, Marshall and Albion, Saginaw and Eaton Rapids in Mich.; Janesville, Kenosha, Columbus, Viroqua, Sauk City and Hayward in Wisconsin; and Mankato, Rochester and St. Cloud in Minnesota.

On its website, the Public Theater said the purpose of its Mobile Unit is to "break down economic and geographic barriers to the arts by meeting our communities where they are, staging free professional theater productions in local neighborhood venues such as libraries, homeless shelters, and community centers across all five New York City boroughs."

And it said this expansion of the program, which will include special engagement activities at each stop, is designed to "amplify the voices of local communities in the Rust Belt and Midwest, and to powerfully connect their stories to a larger national narrative."

While it isn't directly stated on that website, The New York Times — in reporting the announcement — noted the tour is happening, before midterm elections, in upper-Midwest counties "where the 2016 election was closely contested; all but four swung toward President Trump." In that article, Oskar Eustis — the Public's artistic director — replied that "Our job isn't to change anyone's vote. It's to open  a dialogue and do our part to remind all Americans of what we have in common."

The Times also reported the tour's funding was provided by the Ford Foundation and the Andrew Mellon Foundation, with additional support from the Doris Duke Charitable Foundation. For more information, visit the The Public Theater's website here.