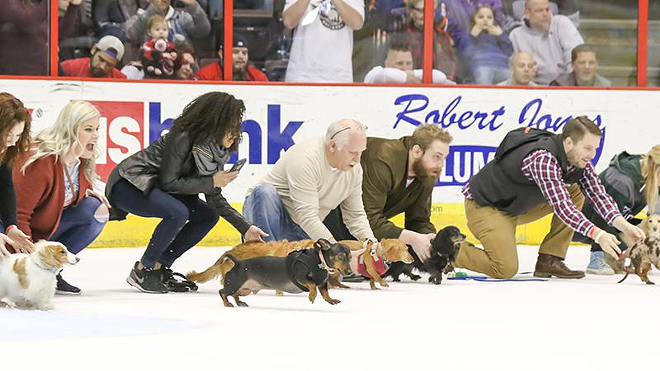 Photo: Provided by Cincinnati Cyclones
How fast is your wiener?

Dog breeders around the world know you train wiener dogs for speed in a race, not endurance. Have you been conditioning your beloved dachshund for his/her moment of glory in front of a packed hockey arena?

Did you know there's more to do at a hockey game than build pyramids out of empty dollar beer cans? Bring your four-legged buddy to the U.S. Bank Arena for the Cyclones’ Wiener Dog Races presented by John Morrell.

All the good pups whose parents registered their spot in the race (visit the Cyclones’ site for a waiver) will patter across the frozen rink in a life or death (not really) race of a lifetime during the game's first intermission. Also, Morrell is sponsoring dollar hot dogs all night.

And even if your dog isn’t racing, you can bring your them to the game to sit in a designated “Pups and Pucks” area.