Quiltmaker Dr. Carolyn Mazloomi to Speak at The Carnegie's The Art of She

Before she speaks at The Art of She at Covington's The Carnegie, we caught up with Dr. Carolyn Mazloomi to chat about the art of African-American quiltmaking. 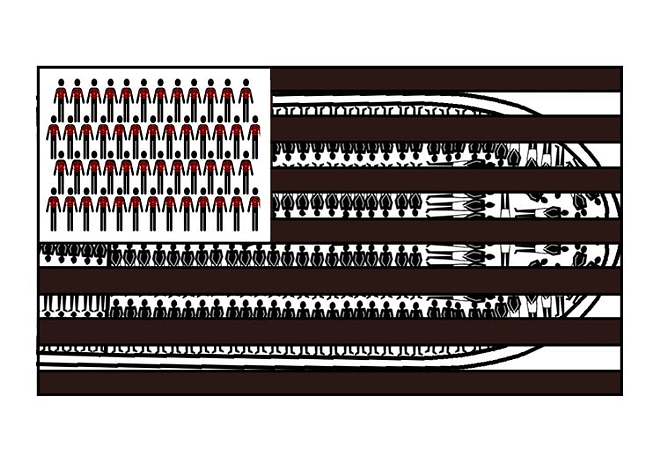 At one time, Dr. Carolyn Mazloomi was an aerospace engineer. That is, until she taught herself how to quilt. Nearly 40 years after learning the craft, she has gone on to found the African-American Quilt Guild of Los Angeles and the Women of Color Quilters Network, show her work in over 70 museums across the country, curate exhibitions and has authored books honoring the history of African-American quilt making.

As part of The Carnegie’s Art of She event at 6 p.m. on Thursday (May 23), Mazloomi will discuss her career as a quilter, curator, educator and author.

Originally, Mazloomi wanted to take up an art form that would allow her to spend time at home with her children. Quilting was the natural choice.

“I love the tactile nature of cloth,” she says. “It’s a familiar material. We as human beings here have a lifelong relationship with cloth. It’s the first thing we’re swathed in from birth. It’s the last thing that touches our body upon our death.”

“These are not the quilts that grandma made,” she continues. “I create art that deals with tough subjects that people may not normally talk about.”

Mazloomi has made colorful quilts in the past. For the past eight years, however, she’s worked exclusively in black and white, making her striking creations jump out at their viewers with the high contrast and detail of linocuts.

Many of her narrative quilts chronicle the past and present of racial violence in America. At first glance, “Flag of Conscience” depicts an American flag in black and white. Its stripes are created from a diagram resembling the Brookes, an infamous cargo ship of the transatlantic slave trade wherein enslaved people were packed together for months-long, nightmarish journeys that many didn’t survive. Instead of stars, 50 figures stand at attention with red targets bursting from their chests like beating hearts.

In “Certain Restrictions Do Apply,” the Statue of Liberty guards a New York City skyline, standing atop Emma Lazarus’ famous poem “The New Colossus.” As the pedestal reads “Give me your tired, your poor, your huddled masses yearning to breathe free,” Lady Liberty holds a stop sign; the other hand is outstretched in a warning. Migrant boats sink in the water below and people drown at her feet. 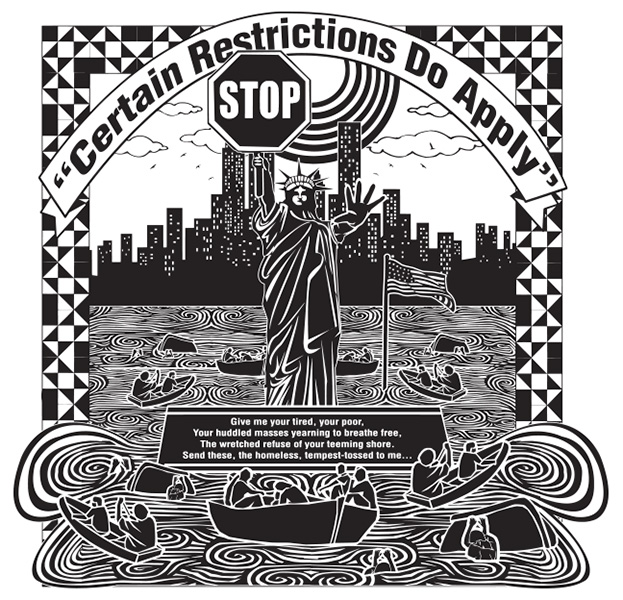 Other quilts are a celebration of love, family and the endurance of African-American culture. Many depict joy — places of worship, mothers with their children and famous African-American musicians. Another was sewn in honor of Dr. Martin Luther King, Jr.’s birthday.

Before moving to Cincinnati, Mazloomi founded the aforementioned African-American Quilt Guild of Los Angeles in 1981 and Women of Color Quilters Network in 1985, which has since grown to nearly 1,700 members.

“The goal of the Women of Color Quilters Network especially — which is the largest black quilt guild in the country — is about preservation and teaching,” she says. “I started that group to disseminate information about the historical and cultural significance and the monetary value of quilts that are made within the African-American community.”

In her travels, she says she would see quilts in galleries selling for “enormous” prices — prices that weren’t trickling down to the makers.

“They were getting next to nothing and they had no idea of their true monetary value,” she says. “For them, making quilts was just something to keep them warm. They looked at the quilts as utilitarian objects, whereas the collector would see art.”

Now in its third year, Art of She began as a way to fundraise for The Carnegie’s art galleries while supporting women artists. (The biannual event takes its name from Art of Food, The Carnegie’s yearly edible-inspired art extravaganza.) For more info on the event click here.