Billy Luther and Jake Courtney opened their Over-the-Rhine storefront in late 2017. Now, the vintage mavens are looking ahead. 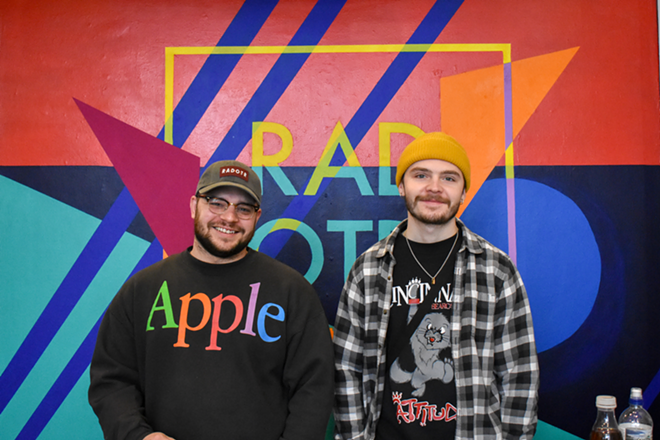 Since it opened in November 2017, Rad OTR has become a hub in Cincinnati’s vintage scene. Their store’s collection — made up of 1980s and ’90s vintage clothing and accessories, from Nike sweatshirts and Mickey Mouse tees to Coogi sweaters and Air Jordans — reflects the community they’ve built.

Both Luther and Courtney graduated from the University of Cincinnati in 2016. And both were selling items via Etsy or Instagram before the storefront even opened, which they say helped develop local connections.

“Some things in here, very limited things, have been given as gifts,” Luther says. “But those gifts have been from people who are friends of ours, who are artists or business owners.”

Last year, for example, they were gifted a limited-edition New York Post newspaper designed in collaboration with a Supreme, a well-known vintage skate brand.

Marlena Toebben
The New York Post Supreme cover, which was gifted the Courtney and Luther.

Between Rad OTR’s hardwood floors and the 15-foot-high ceilings are blasts of colors telling stories that vary from Rock & Roll memorabilia to nostalgic childhood  TV shows. Clothing hangs on thin black piping, which was made by the pair with the help of Courtney’s dad. Courtney’s girlfriend, Lindsay Shroyer, hand-painted the logo mural behind the counter and Courtney himself drew Bart Simpson saying “Welcome to Rad, man” on a small chalkboard in the store. Aside from personal touches, all their items have been carefully picked by the two.

“We’ve seen every single thing in here,” Courtney says. “We are a hand-picked, curated shop.”

Most of their customers are regulars, like Ethan Anost, who has frequented the store for over a year, both buying and selling items.

“There’s so much love for Rad in the city,” Anost says. “There’s been parties, there’s been shows, there’s been collaborations. They have grown and done so much in one year that I haven’t seen other brands or start-ups do in five years in this city. It’s amazing.”

Just over two years into opening their first location, the duo are already spearheading new projects, including a podcast dubbed RADCAST and plans to open a second shop in Columbus either this year or next.

The podcast, which can be streamed on YouTube, only has two episodes so far, but they have guests slotted for a whole season of 10 to 12 episodes. In episode two, they spoke with 19-year-old local Brock Penn, who owns Sole Revival sneaker shop, about the business of selling shoes and the pop culture surrounding the footwear industry.

“It’s two guys, a couple of beers and a guest,” Luther says. Their YouTube channel includes these podcast episodes focusing on different aspects of vintage culture and other videos showing items from both their personal collections as well as from the store. 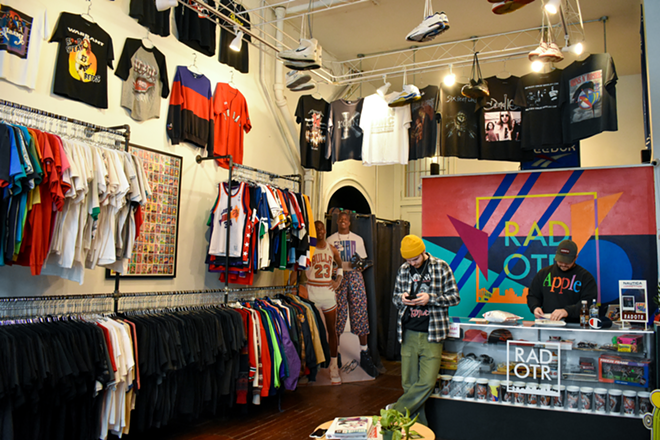 There’s a third owner, too, whom Luther met four years ago on a vacation to Chicago. At the time, he was selling items on his Etsy and heard about a store called Rad Vintage, owned by RJ Geyman, who happens to be from Cincinnati.

“I spent eight hours in his store that first day and just picked his brain about everything,” Luther says.

And in late 2016, plans for the Rad OTR storefront started to come to fruition.

“I met Billy when he came in the store and we talked for the day. We grew our friendship over time and I realized he was a good guy,” Geyman says.

Geyman warned Luther that opening his own shop wasn’t a feat he should take on alone. Enter Courtney. (Geyman still lives in Chicago but serves as a mentor for Luther and Courtney’s business.)

Of opening a second storefront in the future, Courtney says that “it’s the same thing as getting a tattoo. Like, I don’t know, it’s hard to have just one. It’s addicting.”

We’ll see if the love continues in Columbus.