The teams haven't clashed in nearly a decade. 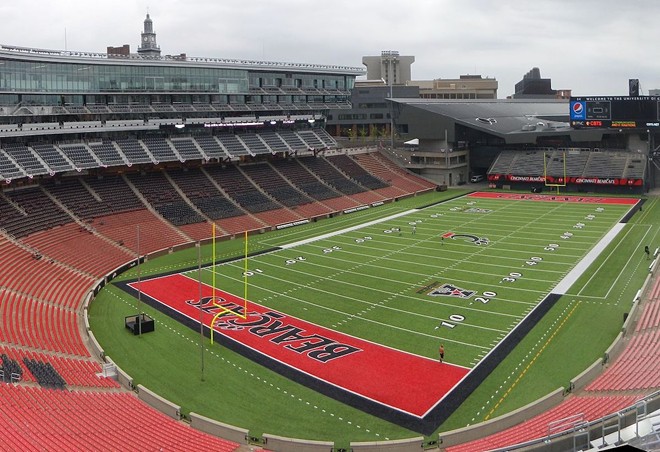 Photo: Ben Levin, Wikimedia Commons
The University of Cincinnati Bearcats will travel from Nippert Stadium to Fenway Park in Boston for the Wasabi Fenway Bowl.

Cincinnati will play in Boston's Fenway Park this month – only this time, it won't be the Reds going there.

The University of Cincinnati Bearcats will go up against the University of Louisville Cardinals  in the Wasabi Fenway Bowl on Dec. 17. Typically the battleground for Major League Baseball teams, Fenway Park instead will host two must-see college football teams during bowl season. NBC has the preliminary bowl schedule.

The Wasabi Fenway Bowl will be the first college football game ever played at Fenway.

ESPN will announce all official bowl matchups on Dec. 4, but Justin Williams, writer for The Athletic, reported the news Friday. As of press time, UC has not posted about the Wasabi Fenway Bowl on its website.

Cincinnati (9-3 on the regular season) will head to the bowl game without a head coach, as Luke Fickell announced Nov. 27 that he was leaving to lead the University of Wisconson's team. Kerry Coombs, UC's cornerback and special teams coordinator, is serving as interim coach. Two-time Super Bowl champ and former Cincinnati Reds outfielder Deion Sanders is rumored to be considering the job.

The Bearcats are third in the American Athletic Conference but are gearing up to move to the Big 12, a much more competitive conference.

Meanwhile, Louisville (7-5) ended 2022 in the middle of the pack in the Atlantic Coast Conference.

UC will play Louisville in Fenway Park on Dec. 17. Kickoff is slated for 11 a.m.