FRINGE 2017: 'Busted Bumpers and Other Metaphors'

'Busted Bumpers and Other Metaphors' is how years of denial can build and build and finally take their toll, in this case on a young woman’s life. 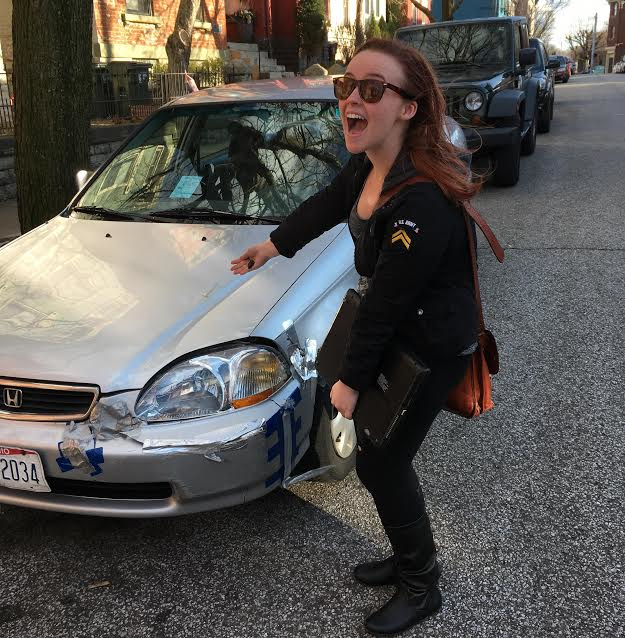 Cram. Stack. Bury. These are the words to live by. Anger can be something that overwhelms a person’s life if they don’t learn how to deal with it. Busted Bumpers and Other Metaphors is how years of denial can build and build and finally take their toll, in this case on a young woman’s life.

A one-woman performance from Alexx Rouse (her debut at Cincy Fringe), Busted Bumpers is also about her father. The dramedy is told in long diatribes dealing with her 40-minute car rides to Saint Xavier High School in downtown Cincinnati with the man and is described as a “non-whiny solo show for anyone with a dad.” Her dad is known for giving way too much detail and having strong beliefs. Rouse discovers that her family isn’t as perfect as she had believed. Also worth noting: Rouse’s performance has a keen sense of Cincinnati.

The only props that she utilizes are a chair, a bowler hat and a stick. The chair doubles as the driver’s seat of the old dilapidated car that she “grew up in.” Rouse alternates standing before the audience in all her vulnerable glory and then hopping onto the chair in a precarious way that surely could go haywire in future shows. The hat and stick play into sections of the show in which she acts out her father’s rants in vaudevillian, silent-film dance sequences. The implication is, of course, that her father was dancing around his problems, just as Rouse comes to realize she does.

Music is a key component as well. Her father’s taste in ’70s classic Rock permeates the show. At one point she breaks into the Eagle’s “Peaceful Easy Feeling” with bittersweet aplomb. What this all comes to signify is how much her father dominated her life.

But most importantly, Rouse’s show is very funny. She has charisma and commands the stage with a manic energy and staccato rhythm that keep the show moving along. At times it feels as if she’s reaching for the joke, such as a sequence in which she tears into Minnesota. This one feels as if it’s punching down, but more of her humor is hit than miss. Her modern lexicon, with casual references to “safe spaces” and being “triggered,” is laced with a degree of irony that always lets the audience know they’re in on the joke.

As Rouse puts it, she’s just a short white girl showing up to complain about her father. But in her specificity she finds universal truths. Many people spend their lives grappling with the impact of their parents, but not everyone can make that struggle so entertaining.