Showtime's "Escape at Dannemora" combines the age-old dramatic trope of the jailbreak tale with the unbelievably bizarre 2015 saga centering on two inmates and a prison employee in upstate New York. 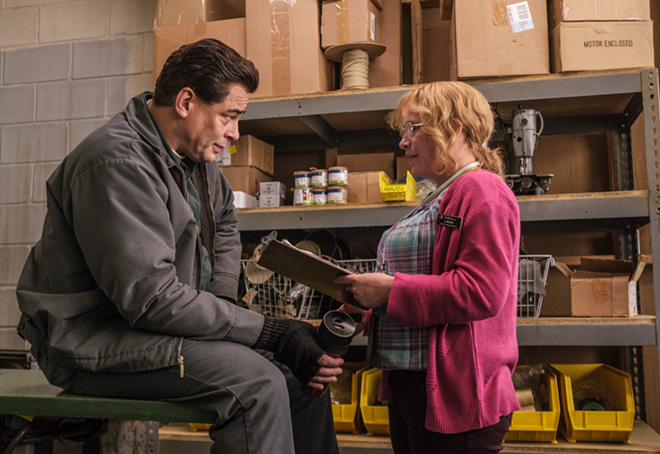 CREDIT: Chris Sanders // Courtesy of Showtime
Benicio del Toro as Richard Matt and Patricia Arquette as Tilly Mitchell.
Sometimes a captivating news story just begs for a dramatic retelling. Buddy comedy Tag from earlier this year — based on a true story about a group of grown men playing the same game of tag once a year for decades — was first reported by the Wall Street Journal. And Bravo is currently airing true-crime drama series Dirty John, pulled from the popular namesake podcast about a relationship riddled with denial, deception, drugs and dangerous consequences.

Escape at Dannemora (10 p.m. Sundays, Showtime) combines the age-old dramatic trope of the jailbreak tale with the unbelievably bizarre 2015 saga centering on two inmates and a prison employee in upstate New York. But, despite earnest efforts by an A-list cast, including Patricia Arquette, Paul Dano and Benicio del Toro — not to mention director Ben Stiller (yep, that one) — the limited series really doesn’t do much more than that.

That’s not to say the straightforward story isn’t compelling enough on its own: Joyce “Tilly” Mitchell (Arquette) and her husband Lyle work in the Clinton Correctional Facility in the sleepy village of Dannemora, N.Y. Working in the prison tailor shop that Tilly oversees, convicted killers Richard Matt (del Toro) and David Sweat (Dano) cultivate relationships with her in an effort to gain resources to break themselves out.

I followed the real story as it played out in the news, but if you’re watching blind, Escape opens with a peek at the aftermath of the titular event that kind of spoils some of the suspense for the rest of the series. It’s an odd choice, because the rest of the show plays out chronologically. It’s one of a few storytelling missteps that prevent this good series from being really great.

We don’t get a lot of background on our characters and what makes them who they are at this point in their lives. Sweat, and Matt particularly, seem pretty well adapted to life on the inside, though early into the series they plan to make their escape. Meanwhile, Tilly is fed up with her dull life and longs to be desired, if only by manipulative murderers.

Viewers are whacked over the head with this symbolism of Tilly wanting to be some hot young thing again — even though her dopey but loyal husband Lyle appears to love her as she is. She blasts Pop radio, recounts her transgressions in her diary and acts with the blind ignorance of a lovesick teen. There’s a tone issue here. I’m left with an uncomfortable feeling of pity and embarrassment for the real Tilly and Lyle — not just because they were both played the fool, but because the characterizations of them in the show can border on insulting. It feels, at times, like we’re mocking them.

There’s no need to paint Tilly as a harmless victim, nor criminal mastermind. And I take no issue with examining her under a critical lens. In fact, I don’t think she’s examined critically and thoughtfully enough. To make her so one-note does a disservice to the story. I wish creators and writers Brett Johnson and Michael Tolkin would have picked a more interesting perspective for her.

If you see actual video footage of Tilly, its obvious Arquette truly morphed into character — physically and otherwise (albeit a little heavy on the Midwest-meets-Northeast accent). It’s the kind of role that generates award buzz — and Arquette has already garnered Golden Globe and Screen Actors Guild nominations for her performance. (The series itself is also up for a Globe.)

And while the storytelling goes a bit astray, you can’t help but get pulled in by the performances. Dano nails it as the reserved, determined Sweat, while del Toro predictably plays the cunning smooth-operator Matt to a tee. Filmed in real correctional institutes, tight shots convey the claustrophobia of prison life. Paired with the tension of trying to break free and the cruel reality of the aftermath, it makes for a nail-biting — if not glacially paced — ride.

You’d just think a show about dangerous criminals, scandalous affairs and adorable pugs would be a bit more…exciting? But with mostly solid performances, this too-strange-to-be-true story is still worth checking out.