Review: 'Incident at Our Lady of Perpetual Help' at the Playhouse is a Comic Irish-Catholic Tale Set in the 1970s

Playwright Katie Forgette’s situational comedy reaches back into the lives of an Irish-Catholic family in what the program calls “a city very much like Cincinnati.” 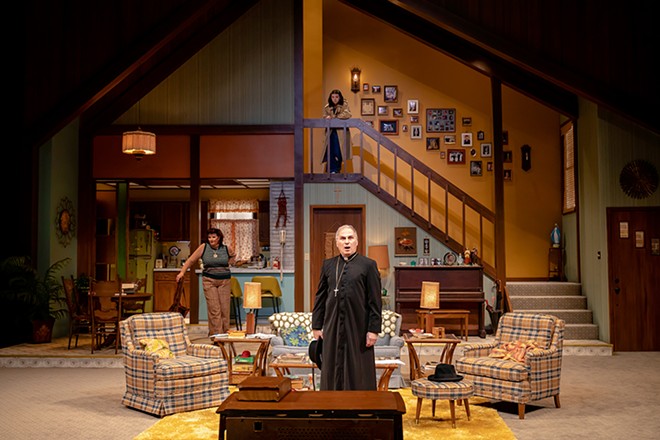 Photo: Mikki Schaffner Photograph
John Plumpis as Fr. Lovett in Incident at Our Lady of Perpetual Help at the Playhouse in the Park

The 1970s are a half-century ago but can be remembered fondly and humorously as evidenced by the production of Incident at Our Lady of Perpetual Help at the Playhouse in the Park.

Playwright Katie Forgette’s situational comedy reaches back into the lives of an Irish-Catholic family in what the program calls “a city very much like Cincinnati.” Let’s make that West Side Cincinnati, where traditional conservative values from 1973 — the year this story takes place — likely haven’t faded all that much.

It's a memory play, presented particularly from the perspective of then 19-year-old Linda O’Shea (Elise Rucker), who narrates the action, frequently stepping aside from events to speak directly to the audience. Playwright Forgette employs this device throughout the play, not only with Linda’s narration, but with her very liberal Aunt Theresa "Terri" O’Shea (Barbara Chisholm, familiar to Playhouse audiences for past appearances in Erma Bombeck: At Wit’s End and Misery). Aunt Terri is ready, willing and eager to step forward with her own version of the story.

The O’Sheas are faithful members of a Roman Catholic parish, and all the events happen in the living room of Linda’s parents' house, designed in period detail by Jo Winiarski. It’s furnished with chairs and a footstool with matching plaid upholstery, a couch with a crocheted afghan and a television in a wooden console. A small upstage kitchen has a vintage wall phone, and the flight of steps to the upstairs bedrooms is festooned with framed family photos. Xavier Pierce’s lighting design puts Linda in pools of brightness for her asides to the audience, darkening the rest of the scene as the other actors momentarily freeze. 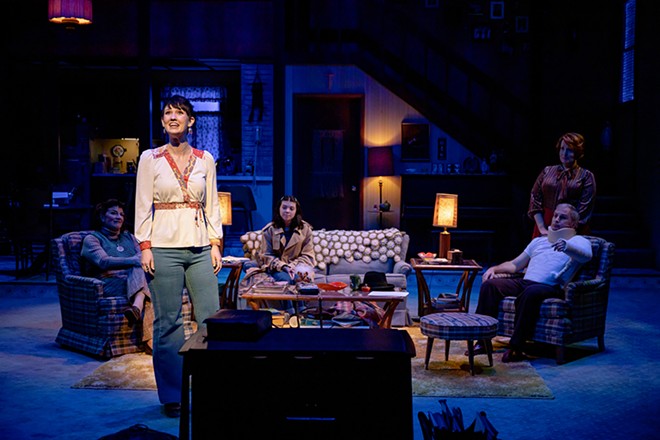 Photo: Mikki Schaffner Photography
Elise Rucker as Linda in Our Lady of Perpetual Help at the Playhouse in the Park

Linda reflects on an “incident” she sparked in 1973, a series of falling dominoes that kept multiplying from a simple if awkward conversation between her and her sister about female puberty, which is accidentally overheard by their overbearing priest, Father Lovett (also played by Plumpis). It’s a moment that could have threatened the family’s upstanding reputation in the conservative parish. As Linda says, this is a story familiar to anyone who has experienced “Catholic guilt — also known as Jewish guilt, Methodist guilt, Baptist guilt, Lutheran guilt and atheist guilt.”

Linda has been hoping to leave town for a creative writing program at Stanford. Her mother has been plunking away at a romance novel she’s been writing in fits and starts while raising her family. Terri, furious over her husband’s thoughtless, domineering ways, has her own perceptions of how things should unfold. Becky, naïve but spunky, is a fan of classic movies and imagines herself as a junior version of private eye Philip Marlowe, who cracked cases in films in the 1930s and ’40s.

When Jo asks Linda to fill Becky in on the facts of life, the story’s fuse is ignited, full of laughable twists and turns. But of course, it resolves happily. In addition to Linda’s fitful and perhaps not entirely accurate recollection, we hear wry observations about the family’s own memories of the events. Terri, for instance, wants to smoke (because in 1973 everyone smoked), but Linda reminds her that audiences in 2022 will object to cigarette smoke in the theater. Speaking to the audience evokes frequent sympathetic responses and build momentum.

In addition to playing officious Fr. Lovett, Plumpis is called upon to portray Betty Heckenbach in drag, the gossipy parish busybody who zealously seeks nosy details about what’s troubling the priest. Terri calls her “a one-woman swarm of locusts.” There’s no real effort to conceal that it’s Plumpis in these two added roles. Seen from the point of view of Linda’s memory, Fr. Lovett looks like her dad — making the blurred connection all the more entertaining.

I suspect many Cincinnati theatergoers will enjoy Incident at Our Lady of Perpetual Help, reflecting as it does values still prevailing in many local homes. The Playhouse advises that the show is intended for audiences ages 16 and up, thanks to some colorful and rather exaggerated conversations about puberty and conception.

Producing Artistic Director Blake Robison has staged the show with a cast of fine actors. Young actress Maddock (who is a freshman at Ursuline Academy) holds her own among these professional actors, bringing some believable adolescent charm to her performance. Chisholm’s salty Terri offers a nice balance to her devout, emotional but loving sister; played by Grennan, Jo is a character many will recognize. All three of Plumpis’s roles are conceived as caricatures, but he gives them lots of comic turns and warms up as a father in the final scene. Rucker’s Linda is the most challenging role, hopping in and out of the action; she’s convincing as the 1973 version of herself, but Forgette’s writing of Linda’s adult observations sometimes seem forced.

The playwright uses too many of the back-and-forth moments between then and now. The direct addresses to the audience start to feel a tad forced, and the story’s contrived ending has a serious whiff of TV sitcom to it. Not that there aren’t a lot of laughs along the way as well as some truly heartfelt moments. But a more natural unfolding of the story might have felt less manipulative.

The show’s opening was delayed by a COVID-19 outbreak in the cast. They’ve all recovered and are back onstage, but the run will be somewhat shorter than usual.

Incident at Our Lady of Perpetual Help, presented by the Playhouse in the Park on the Marx Mainstage, continues through Feb. 27. Tickets and more info: cincyplay.com.