During the 1987 Reykjavik Summit, things take a turn when Ronald Reagan and Mikhail Gorbachev fall in love. 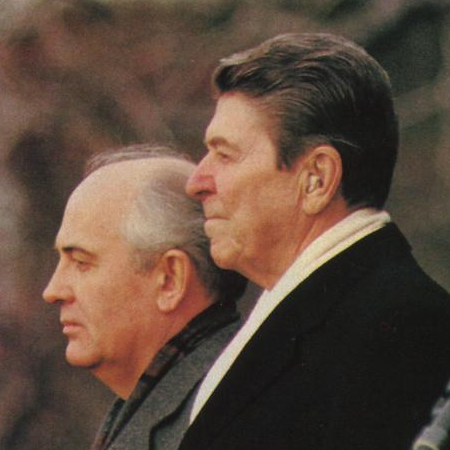 Oftentimes the best things arise from the most rare of places. Reagachev, a FringeNext production by high school students Fiona Blackburn and Julia James, was just that — the strangest ingredients oddly making something quite resplendent. After all, what’s better than a political bromance with a side of flaming homosexuality? Blackburn and James’ show gave new definition to the word “unique” through song, dance and dropped pants.

Reagachev — a combination of Ronald Reagan, the United States’ 40th President, and Mikhail Gorbachev, the eighth leader of the now defunct Soviet Union — is set in 1987 during the Reykjavik Summit (and no, don’t feel bad if you can’t pronounce that), an attempt to end the Cold War. But things turn scandalous when the once political melodrama turns to a gay romp as Reagan and Gorbachev fall in love. With good humor, great writing and musical ingenuity, the show was not superfluous in its attempt to be comedic.

The show’s ensemble worked coherently, even with the sheer absurdity of the plotline. They were convincing enough that the audience often forgot they were watching a show of scathing romance and fictitious humor, characterized best by the signature line, “Mr. Gorbachev, tear down your pants!” an echo of Reagan’s infamous Berlin Wall quote. The show’s use of song was generally comedic. A few unnecessarily lengthy and outdrawn numbers, such as Nancy Reagan’s heartbroken elegy to lost love, could have been reduced.

Leading the ensemble, Noah Birrer and Abbie Guard, as Mikhail and Raisa Gorbachev, truly commanded the stage, employing expertly executed accents and comedic timing. Their counterparts, Anthony Saccone as Ronald Reagan and Blackburn as Nancy Reagan, were the yin to the yang of Birrer and Guard, with effectively juxtaposed demeanors, which were paramount to the show’s success.

Whether real or fake, James Owens as Uncle Sam and Sarah Draud as Mother Russia were given snippy, clever material and performed it well as the narrators of the show.

Also worth noting is Erin Miller, as Sergei Izmenikov, Gorbachev’s jittery sidekick. Miller is ready for her own telenovela: Her scene-stealing stage presence could conquer the world. She possessed a dedication to not only her character’s physicality, but also the motives within her character that drove the show entirely.

Reagachev’s tech was minimal, as is the norm for Fringe productions. However, the red and blue lighting seemed adequately patriotic, although whether or not the red was a nod to American patriotism or Soviet communism is left for audiences to decide.

As the show came closer to the present, reflecting recent incidents in Russia, it became less of a romp and more of a political statement, using humor to draw attention to issues facing our world today. That, in and of itself, is what theater is meant to do, and Blackburn and James’ Reagachev did it skillfully. The road to peace is long, but with scandal, lust and a fair share of vodka, it can seem less grueling.