Richard Gere is the perfect fixer in ‘Norman’

'Norman: The Moderate Rise and Tragic Fall of a New York Fixer' revolves around Gere as Norman Oppenheimer, who traffics in a world of money and favors. 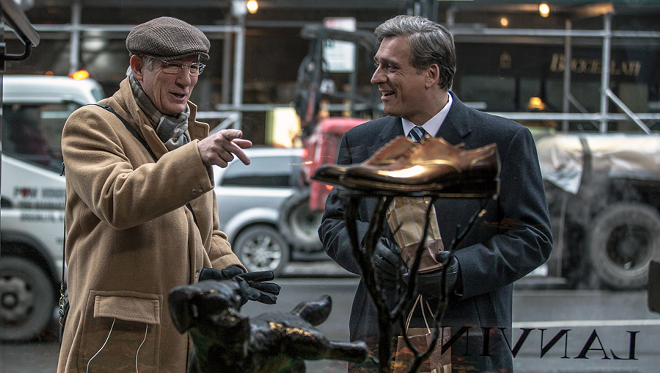 Photo: Niko Tavernise / Courtesy of Sony Pictures Classics
Richard Gere (left) and Lior Ashkenazi
Norman: The Moderate Rise and Tragic Fall of a New York Fixer, the full title of the new film from American-born Israeli writer-director Joseph Cedar (Footnote), has the potential to be a bit misleading. It all comes down to our associations with the idea of what a “fixer” is. When I hear someone being called a “fixer,” I immediately think of tough guys who come in after the shit has hit the fan and clean things up. I assume the worst — expecting the kind of person that has to take action and remove a troublesome element, usually by force (see Liev Schreiber’s character on the Showtime series Ray Donovan).

I suppose I have to acknowledge that there are exceptions. What about The Wolf (Harvey Keitel) from Quentin Tarantino’s Pulp Fiction? A curiously hands-off figure, The Wolf is a cultured man, dressed in a fine suit and with a wad of cash to dispense, whose prompt availability and cool-headed no-nonsense leadership help when Vincent (John Travolta) and Jules (Samuel L. Jackson) need to clean up a killing.

I bring that up to highlight the distinct difference between The Wolf and Norman Oppenheimer (Richard Gere), the focus of Cedar’s film. Norman travels in completely different circles, trafficking in a world of money and favors. We’re talking politics — which is crime by another name, to be sure, but crime where the bodies don’t get buried so much as rendered invisible.

Imagine Ralph Ellison’s Invisible Man if its historic trappings of race were replaced by a culture rooted much more fundamentally in achievement at all costs: You (meaning everyone) use the people you know to get ahead. Sometimes knowing is little more than having a name to drop at the right moment in a conversation. In Norman’s world, knowing and hearing is another form of seeing and being seen.

And Norman operates in a decidedly old-world fashion. He courts and curries favor through a fawning attentiveness that is cunning and could be lethal — if employed in a more nefarious way. He obviously has studied Machiavelli, but has no desire to weaponize the lessons. There is a sincerity and honor that is unwavering and anachronistic.

Gere is uniquely suited to the role. As a performer known for his good looks, there is a visceral charge in watching him minimize his charms, which have become even smoother as he has aged. His Norman has a recognizable frumpiness to him, an awareness that he always has to work, to strive, to connect more and harder than the next guy. He’s hungry, and that rumble in his belly keeps him sharp.

As a small-time hustler, Norman always has multiple irons in the fire, which sets him apart from the traditional notion of who and what a fixer is. He has clients, but they come to him seeking aid in the pursuit of their agendas. They desire the access they believe he has accumulated through his network of contacts.

We never truly know how Norman makes a living. He has no home to speak of, nor a family. He is constantly moving around, plotting and planning his next encounter.

At one point, Norman saddles up next to Eshel (Lior Ashkenazi), an Israeli functionary with vague political aspirations, tailing the man as he wanders the streets of New York, until cornering him in an upscale men’s boutique where he eventually agrees to buy Eshel an expensive pair of shoes. It is a costly favor, a high-risk gamble that takes years before leading to any kind of payoff. But it serves to define the stakes for Norman and his approach to his identity as a fixer. Nothing else matters, other than his faith in the powerful potential of a connection.

Norman, as a narrative, plays out like a series of tangential chapters that gradually intertwine over time. The title cues us in to the inevitable tragedy of Norman’s life, which has been obvious from the moment we first laid eyes on him.

It is hard to believe, but Gere truly disappears inside the small shell of this man who is forever fighting to be seen. For one brief and shining moment, Norman stands before us, and we appreciate his herculean effort. Then, in the blink of an eye, he’s gone, and so are everyone’s problems.

Which begs the question, who else should you call? (Opens Friday at Mariemont Theatre.) (R) Grade: B+