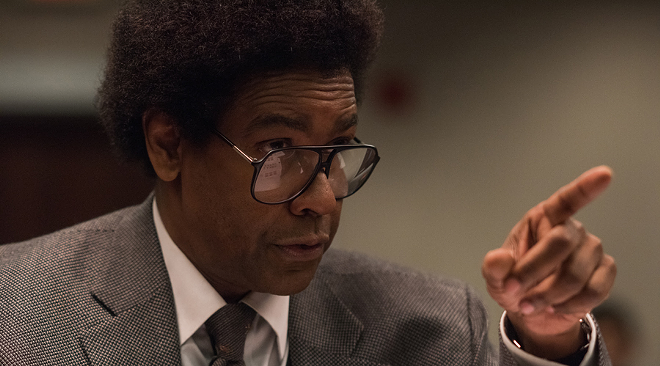 We rarely associate the law and lawyers with principled stands. We, as a society, have lost any sense or memory of a time when this might have been possible. The civil rights era is remembered for the marches and rallies, the nonviolent protests and sit-ins, but it could be argued that none of that would have been possible without the invaluable support of legal strategies that ensured those protests were operating within a framework that allowed for legal challenges to be made against a flawed system.

This reality is part of what makes Roman J. Israel, Esq. such a fascinating and somewhat confounding film. The titular hero, played by Denzel Washington, is a compulsive and idealistic defense attorney, albeit one who works far beyond the courtroom world we normally associate with legal dramas. Looking at Washington, with his bushy afro and his shabby sport coats and sweater vests, you would be hard-pressed to imagine not only that this guy could be an attorney but also that he even exists in the modern world at all. Roman looks like a bum, the kind of person everyone walks past on the sidewalk without a second glance.

Writer-director Dan Gilroy has a real affinity for characters and narratives that pick away at the margins of social concerns. In 2014’s Nightcrawler, his directing debut, Gilroy linked audiences up with Lou Bloom (Jake Gyllenhaal), a con man hustling for work who enters the L.A. crime journalism game. And before that, he co-wrote 2012’s The Bourne Legacy, starring Jeremy Ritter.

Roman J Israel, Esq. appears to be a natural and obvious next step for Gilroy, but he gets to start things off from slightly higher ground. Roman is a Don Quixote-type figure tilting at windmills, championing his principles with a combination of pure idealism and blunt arrogance that stems from his savant-level recall, which makes him a shuffling compendium of California codes and cases. He sees the truth plainly and directly, but it makes him a lousy lawyer because the art of lawyering is less about the law and more about the pleas and deals that take place behind the scenes.

He has worked with a front man for decades, a lawyer who used the courtroom to effectively game the system, to fight the good fight for the poor and the disenfranchised citizens by winning class action suits and protecting regular folks from the more predatory aspects of the criminal justice process. Roman could avoid the courtroom himself, but still believe that he was following in the footsteps of those lawyers making sure that the civil rights protesters would be in position to march for social justice.

But the façade that protected him crumbles when Roman gets left alone to fend for himself. From his very first day in court, we see how ill-equipped he is to survive. With his comrade — who had been his armor and shield — gone, Roman is a hapless knight in a world of dragons. He attempts, initially, to spurn the support of George Pierce (Colin Farrell), an attorney who, while inspired by Roman’s partner, has pursued a far more practical path and established his own high-powered firm. Roman wants his principles to be rock-solid, but the film’s narrative shows us how even the most righteous man can start to question his beliefs.

Washington, over the course of his career, has given us examples of proud and committed men, honorable warriors on a variety of battlefields — some quite literal (like Glory, where he earned his first Academy Award), others metaphorically (take the one-two punch of Spike Lee’s Mo’ Better Blues and Malcolm X). He has subverted his righteousness to create captivating monsters (Training Day, for which he received a Best Actor Oscar by playing an especially corrupt Los Angeles narcotics cop).

But in Roman J. Israel, Esq., he accomplishes yet another marvelous feat by waging the most dangerous war of all — arguing both sides of the case for his character’s soul. It goes without saying that Washington, once again, proves to be the undisputed winner of this morality play, although he does so at the expense of a legal drama that yearns to score points at the box office without providing the obvious courtroom thrills. (In theaters.) (PG-13) Grade: B