Season 9 is officially underway, and last month's season premiere was the most watched episode in the show's history (or, as RuPaul likes to say, herstory). 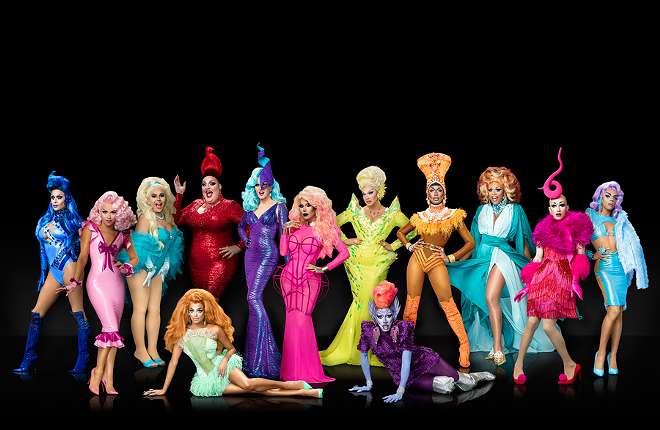 Photo: Courtesy of VHI
Contestants on new season of the hit series "RuPaul’s Drag Race"
What started as a niche reality show on little-known LGBTQ network Logo in 2009 has transformed into a runaway hit, and as RuPaul’s Drag Race (8 p.m. Fridays, VH1) evolves, the show is staying true to its quirky, queer roots.

Creator, host and one of the world’s most recognizable drag queens RuPaul insists that drag is not and never can be “mainstream,” and while it is important to respect the art form’s history as something that had to be underground, there’s no denying this once subversive subculture has been elevated to a new level today.

Drag is now being recognized by those outside of the community like never before, and its commercial potential is just beginning to be tapped. With that acceptance comes appropriation (hello, bachelorette parties taking over gay bars), but also genuine appreciation. There are so many different types of drag and reasons for using this form of expression that audiences have come to learn about via Drag Race. The show is in its ninth season, for crying out loud, with no indication of slowing down (in fact, casting is open for Season 10). Sorry, Ru, but I’d call that mainstream.

Like any good show, Drag Race’s appeal lies in its endless entertainment, and there is a lot of humor. You’ll find queens who specialize in transforming their masculine features into feminine illusions, some who lip sync and dance better than a song’s original performer and creative innovators who serve as living art, but the best drag queens and most entertaining TV characters can do a little of it all — with a heavy dose of comedy.

Drag Race has real heart, too. Performing as a female impersonator is not without its prejudices, and the show’s contestants regularly speak on issues surrounding being gay or trans. (While most contestants have been men, trans women are eligible, too. Drag Race has seen a number of trans women come out on or after the show, including this season’s Peppermint.)

In last week’s episode, the queens reflected on the Pulse nightclub shooting. While none were in Orlando on that fateful night last May, some had recently performed there and one would have been at Pulse had it not been for a reschedule. The queens discussed the significance of this attack and how it’s important to be “visibly queer” now more than ever. “Drag is a brilliant place to work through feelings of pain,” Sasha Velour remarked. “Girl, drag is therapy!” Aja responded.

Girls (Series Finale, 10 p.m. Sunday, HBO) – Hannah starts a new chapter. Titled “Latching,” a breastfeeding term, the series finale will serve as a traditional epilogue, creator and star Lena Dunham has said. Regardless (and sometimes in spite) of Dunham’s off-screen antics and the ensuing opinions that swirled about her, Girlswill go down as an exemplary show by and for millennials — and so much more.

Veep (Season Premiere, 10:30 p.m. Sunday, HBO) – Increasingly relevant for all the wrong reasons, Veep picks up one year after Selina loses the presidency as she tries to cement her legacy. Dan and Amy struggle to fit in at their new respective jobs.