Russo Brothers' "Cherry" Is Bad! Enjoy the Shots of Cleveland, Though

Tom Holland might as well be howling into the night, "I AM AN ACTOR!" 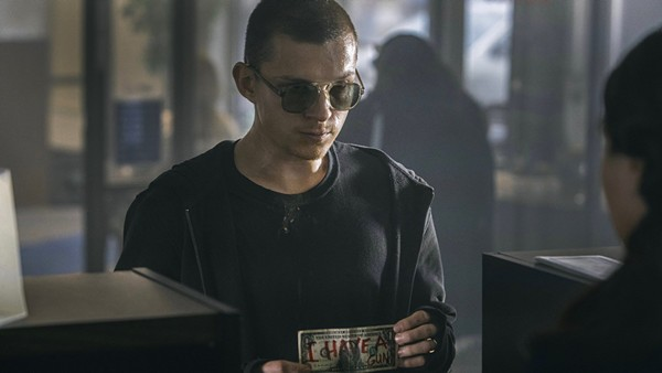 Tom Holland robs a bank in the Russo brothers' "Cherry."

In the 2018 novel Cherry, a critically acclaimed bestselling debut by Nico Walker, the protagonist is a drug-addicted bank-robber. The fact that he is also the book's narrator doesn't preclude his portrayal as a really shitty guy: a skeezy, suburban Cleveland deadbeat. Misogynistic. Self-destructive. Stupid to an almost pious degree. Bad news all the way.

What made the book so compelling, in spite of its main character, was its hard-scrabble prose. Cherry was written by a non-traditional author, and its language was pared down to an almost Raymond Carver-esque brusqueness. Plus, there was the thrill of knowing that everything described was more or less real. Walker wrote the manuscript from prison, after all, where he was serving time for robbing banks to pay for his heroin habit, which he'd developed after Oxys no longer cut the mustard as treatment for his Iraq-induced PTSD. Walker's was a tragic, and tragically conventional trajectory, rendered in the book without glamor or self-consciousness.

In the film, which opens Friday at the Cedar Lee for an exclusive two-week run before its opens on the streaming platform AppleTV+, the nameless shithead is played by Marvel's friendly neighborhood Spider-Man, Tom Holland. It's no secret that Holland wants to be taken seriously as an A-lister and is using Cherry as a vehicle to showcase his dramatic range. And while Holland has moments of emotive depth in the film, the abiding impression is that of inauthenticity, an impression that unfortunately pervades just about every aspect of the film. You don't get the sense that you're watching a cohesive story with real characters. You get the sense that you're watching a Tom Holland highlight reel.

Here's Tom Holland as a nebbish collegian, crushing on the cute girl in his John Carroll English class. Here he is in basic training (!), having enlisted after getting dumped. Here he is amid the dust and dirt of Iraq, yanking his pud in a porta-John and then stuttering in disbelief after a Humvee full of his pals gets charred to a crisp when an IED explodes. Here he is throughout the film's grim final hour, pooping his pants, projectile vomiting all over the place, shooting up in the parking lot of the emergency room where his girlfriend Emily (Ciara Bravo) is being resuscitated after an overdose, stabbing his leg repeatedly with a syringe. He might as well be howling into the night, I AM AN ACTOR!

Through it all, though, Tom Holland remains an eminently likable teenage dude. Unlike the heroin-addicted son in 2018's Beautiful Boy, (portrayed with remarkable texture and grace by Timothee Chalamet, despite the film's weaknesses), you're always on Tom Holland's side. Never mind the fact that he's often giggly and serene when high on drugs. Or that he's chatty and flirty with the female bank tellers whom he robs. Or, indeed, that he's kind and considerate to his friends, his girlfriend and the poor Iraqis. The bigger point is that he is in every sense the victim: both of an unjust war and of an epidemic perpetrated by the pharmaceutical industry. He is the good guy, who even tries gallantly to prevent Emily from going down the addiction wormhole with him. (This is all Tom Holland, in other words, not the nameless protagonist modeled after Nico Walker, who neither asks for nor merits much sympathy.)

Directed by Cleveland natives and Avengers alums Joe and Anthony Russo, the film was adapted for the screen by Jessica Goldberg and the Russos' sister, Angela Russo-Otstot. It's a fat two-and-a-half hours long, not a single minute of which breezes by, and it largely follows the contours of the novel.

As such, Cherry often feels like a series of distinct, sometimes incompatible, movies: a campus romance; a violent modern war epic; a gritty chronicle of life on hard drugs, a la Trainspotting; and then, almost as an afterthought, the bank-robbing stuff.

The internal chapters are marked by bright red title cards and punctuated by dramatic changes in visual style. The whole thing is extravagantly stylized. The Russos have brought their technical know-how and mammoth studio resources to bear on, for example, drone shots that capture the streets of Cleveland, wacky color palettes and picture saturations that approximate the sensation of various drugs, blood effects and unlimited ammo that vivify the horrors of war. Furthermore, they constantly seem to be playing around, toying with camera angles, aspect ratios, sound effects and narrative gimmicks. Tom Holland bounces between breaking the fourth wall and offering Nickelodeon-style voiceover, for example. During the boot camp sequence — the novel's most acerbic section, for what it's worth — there's actually a POV shot of a rectal exam, from inside Tom Holland's butthole.

Rarely has there been such pronounced disjunctions between form and content. It's like the Russos mashed up their favorite moments from The Hurt Locker, Goodfellas and Requiem for a Dream, imposed them on a messy script, and expected the whole to be greater than the sum of its parts. These stylistic choices might have been distracting in other narrative contexts, but they're especially jarring when the source material would seem to lend itself to a more muted, low-budget look. This is a movie about drug use in Cleveland, when all is said and done.

Need we specify that it is an unpleasant ride? More than anything, Cherry suggests that the Russos' talent for action spectacle — which is undeniable — might be more effectively deployed within the narrative armature of existing TV shows or blockbuster franchises.

Cleveland audiences will be delighted, in any case, to recognize the local landmarks captured throughout. Important scenes were shot in Cleveland Heights, Little Italy and Detroit-Shoreway. And there is something genuinely touching about the Russos' affection for Cleveland and their desire to bring big productions home. One suspects, in fact, that they were lured to Cherry as a project chiefly, if not entirely, because it was set in their hometown.

One can only speculate what else drew them to this difficult project. But for the directors who were responsible for some of Community's most fun episodes, not to mention the enormously enjoyable Avengers finales, it's difficult to conceive of a more antithetical follow-up.