This new nonprofit business, located in a flag factory, offers specialized industrial sewing equipment and a sense of community 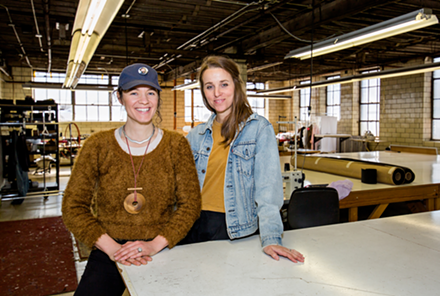 When designer/small business entrepreneur Rosie Kovacs opened up the first iteration of her Brush Factory fashion line nearly a decade ago, the U.S. was in the grips of the Great Recession. The country was in no mood for people to consider an upcharge on a necessity like clothing just because it was “Made in America.”

“It was really early; it would’ve been astronomically expensive, and no one would’ve understood what it was all about,” Kovacs says, in a conversation at the site of her newest endeavor, Sew Valley. It is a nonprofit incubator for designers and others working with sewn products and has been located inside the 149-year-old National Flag Co.’s headquarters at 1010 Hulbert Ave. in the West End since January.

Her partner in the project is artist/designer Shailah Maynard, who owns Working Girls, a brand that describes itself as making “tongue-in-cheek accessories and clothing items often inspired by ’80s/ ’90s music, film and pop culture.”

The time is right for Sew Valley, Kovacs says, because lots of people who want to make small-batch apparel and related accessories need the training and a resource center to get them from idea to product. And there are more people than ever who want to do that in an economy that is encouraging all manner of start-ups and makers.

“Do you know how many people sewing for Etsy there are out there?” Kovacs asks. “And plenty of Etsy people do it full time.”

But there may not be that many Etsy-selling entrepreneurs with the resources for the kind of sewing machinery that Kovacs and Maynard have been busy acquiring. Sew Valley’s ground floor warehouse currently holds dedicated production implements, such as a Singer cobbler shoe patch, a Reece button hole and a Consew zig-zag machine. Kovacs recently went to Indianapolis to pick up a Kansai double-needle bottom cover stitch machine, which allows for flexible hemming of stretchy fabrics like T-shirts and athletic wear.

Kovacs explains that these industrial machines, which focus on one or two specialized tasks, allow for faster use and better-quality work.

“You need a ton of machines for just one garment,” Maynard adds.

Sew Valley has six members who utilize the production space and machines, with room for a seventh. The members pay between $150 and $300 a month for 24/7 access to the studio and a discount on production services. They can either contract with Sew Valley to make a small-batch run of sewn products or learn to do it themselves. Non-members can also rent studio space by the hour, but not necessarily use the machines.

“Anybody can’t just come in and use the machines,” Kovacs says. “They (have to) come in and take a test.”

Because most prospective members are not trained on such specialized machines, Kovacs is vetting them first with sewing tests to see whether they are capable of using the equipment. Based on the assessment, aspiring users might need further training to be certified.

Sew Valley also provides sewing services, including sewists, on a contract basis to local businesses that have need for their services.

The big public debut for Sew Valley occurs Friday from 7-9:30 p.m. with a fundraiser/member showcase.

Kovacs could have used Sew Valley when she was just graduating from the fashion program at the University of Cincinnati’s College of Design, Architecture, Art, and Planning, with an eye toward building a brand. In the intervening years between graduation and Sew Valley’s start up, she and Hayes Shanesy built up Brush Factory, focusing largely on locally made and sustainable hard goods like furniture and home fixtures instead of fashion. (They now have a storefront on Main Street in Over-the-Rhine.)

That business has kept Kovacs very busy, but last year — helped by $50,000 in seed money from the Carol Ann and Ralph V. Haile Jr./U.S. Bank Foundation — she and Maynard started Sew Valley.

Maynard first took a research trip to New York in 2016, where she visited a fashion accelerator and production facility. “It seemed like something that might actually be needed here,” she says. (The two were unfamiliar with the Dayton Sewing Collaborative, a sewing makerspace and training facility that aims to make sewing a “viable career option in the Ohio Valley.”)

They did another research trip last summer to Chicago, and later talked to Detroit’s Urban Manufacturing Alliance, a national coalition of organizations and individuals that are building manufacturing economies for the 21st century.

“They’ve noticed that there are facilities like this popping up all over the country, and they’re trying to figure out how they can help them,” Kovacs says.

Finding space within National Flag came about indirectly. Kovacs says she requested a tour of that company — one of the few ones locally manufacturing what she calls “non-hospitality” sewn products. Introductions were made, and National Flag eventually offered Sew Valley space within its plant.

Friday’s fundraiser/member showcase coincides, not incidentally, with the deadline for Sew Valley to raise $3,000 on the CrowdRise website in order to be in the running for a $100,000 grant to nonprofits. If it should win the grant, the money would help develop its educational component, part of the partners’ long-term plans.

“I think that’ll be a by-product eventually, because we’d really like to do workshops and have open sew hours and things like that,” Kovacs says. “But we’re focused on getting the production-contract side of it going first and getting our facility in operating order before expanding into the community.”

Looking ahead, they have big plans for the future.

“We have a pretty big vision,” Kovacs says. “I already see us needing a bigger physical space for more members. We’d also like to include complementary businesses, like visual-content strategists, stylists and branding.”