Shocking Revelations in ‘Game of Thrones'

This column is obviously dark and full of spoilers. 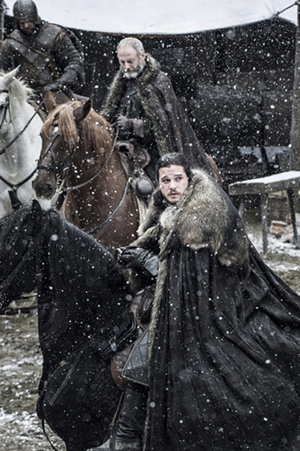 Game of Thrones (Season Finale, 9 p.m. Sunday, HBO) is such a quintessentially fan-centric show. Few other series incite such a rabid following. The ultimate fans can dive into the books and the show, delving into the etymology in agonizing detail and comparing clever observations and wild assumptions after each episode airs (or, in this season’s case, leaks!). This penultimate 7th season — perhaps more than any one yet — gave fans even more to mull over in the most action-packed, rewarding episodes so far. Here’s what’s happened through Sunday’s “Beyond the Wall” episode.

One of the most widely known theories among book readers is that Jon Snow is not Ned Stark’s bastard, but rather his nephew — the child of Lyanna Stark and Rhaegar Targaryen. Last season basically confirmed half of that theory when Bran travelled back in time to the Showdown at the Tower of Joy, which ended with Lyanna dying after childbirth and making Ned promise to keep the child’s identity secret.

This season, Jon’s Targaryen side shone through when he (finally!) met not only Daenerys but her dragons. While the King of the North and Mother of Dragons had their differences, he got up close and personal with her No. 1 baby, Drogon — and didn’t get roasted! The dangerous dragon reacted quite mildly to Jon’s touch.

And while it’s been long believed that Rhaegar raped Lyanna (a sad reality for many characters in this messed-up saga), this season revealed that the two were likely in a consensual, romantic relationship. When we find Sam Tarly at the Citadel, struggling to put his knowledge to good use — outside of, you know, curing Jorah Mormont’s greyscale! — Gilly haphazardly reads from a book about how Rhaegar had an annulment and had a secret wedding in Dorne. And if that marriage was to Lyanna, that means Jon Snow is no bastard, putting him ahead of Daenerys in the line to the throne.

So Jon is Daenerys’ nephew, and a threat to her claim. But even though the two are related, fans still seem set on a romantic relationship — and there certainly appears to be a connection there. By today’s standards, hooking up with your aunt is disgusting and possibly illegal, but in Westeros, where siblings marry and have bastard babies, it’s kind of no biggie. There was a sweet moment in the latest episode where Jon called her “Dany,” a nickname she said she heard from her brother. Hopefully Jon’s fate is better than Viserys’…

Of course, only the all-seeing Bran Stark, now exclusively answering to the title Three-Eyed Raven, knows Jon’s real family tree, and he doesn’t seem intent on spilling any of the valuable information he’s gathered in recent years. For all intents and purposes, Bran is dead, his body only a vessel for this magical, all-seeing entity.

And when it comes to magic, there’s always some brewing north of the wall. As we have learned this season, any living thing can be turned into a wight (Game of Thrones’ answer to zombies). We knew White Walkers reanimate dead people beyond the wall and we’ve seen dead horses in their crew, but the this season brought wight giants and dragons and bears — oh my! The big question is how fatal the ice-breathing zombie dragon will be and who can ultimately kill him.

Meanwhile in Winterfell, a minigame of thrones is in play. Sansa Stark is acting Queen of the North in Jon’s absence, and while she should be celebrating a reunion with her badass, face-snatching assassin little sister Arya, the conniving Petyr “Littlefinger” Baelish has positioned the sisters at each other’s throats. Everyone knows Littlefinger cares only for himself and is in it for the long game. Could he pit the Starks against one another, eliminating the family entirely and taking the throne himself?

While this week’s finale — nearly an hour and a half long — will likely include much set-up for the six-episode final season, the pace of this season suggests more battles, long-awaited reunions and shocking reveals to keep fans theorizing through 2019 — which is unfortunately how long we’ll have to wait for Season 8.