Hyde Park’s Miller Gallery is currently filled with works that evoke whimsy and dreamlike wonder. One photograph features a pair of vibrant ruby slippers. In another, a woman flees from a plane, North by Northwest style.

But it all started with the slippers, L.A.-based photographer Tyler Shields tells me in a recent interview. His current exhibition at Miller Gallery, which opened Nov. 14 and runs through December, is aptly named Fairytale.

“I wanted to do the yellow brick road with the ruby slippers and make a dye transfer of that,” Shields explains, adding that dye transfer led to the advent Technicolor films. “So I thought, ‘What better than Wizard of Oz?’” (Wizard of Oz popularly used Technicolor technology in the 1939 film.)

From there he built a series that has echoes of stock fairy tale and Old Hollywood imagery. The collective result feels like snapshots of one's subconscious.

One photograph depicts a pair of 1950s-style black Cadillacs that have crashed into off-white desert sand — backdropped by cloudy blue skies — yet somehow remain pristine as sun glints off their sleek exterior; together, the cars form a nearly-perfect “V." At first glance, Shields’ photograph looks like a classic film still. Peer closer, though, and the truth is revealed: They’re nothing but miniature toy cars made to look larger than life.

You may know Shields from his previous exhibitions at Miller Gallery — the most recent being last year's Past and Present, which ran in conjunction with the 2018 FotoFocus Biennial. He's also a man of many nicknames, including the "Warhol of his generation" and "Hollywood's favorite photographer."

In his time, he has photographed everyone from Demi Lovato to Dave Franco to Northern Kentucky-native Josh Hutcherson and a knife-wielding Lindsay Lohan. He was also behind the controversial 2017 portrait of comedian Kathy Griffin holding a decapitated and bloody mannequin head of President Trump. His work with celebs, he says, acts as an outlet for them to project something completely different.

"Obviously, now, everyone has a cell phone, everyone can take a picture," Shields says. "So these people now don't need that outlet anymore. I think it was a really specific time that probably won't exist again."

Shields’ own rise coincides with the growth of social media; he first went viral by posting his work on Myspace. When he started working with celebs, blog sites like Perez Hilton, Just Jared and Huffington Post wrote about him. Eventually, he got his work into a gallery and, having attracted a large crowd, began booking more shows.

Shields wasn’t traditionally trained. He says that his childhood was different than most — in his words, he was a middle school dropout. He partially attributes his initial success to being able to attract an audience of his own online.

“The reason why it worked out for me was that I was able to create my own platform,” Shields says when asked about initially navigating the art world, which can be seen as pretentious. “Without the internet, it would have had to go a different route because, to your point, it can be very snobby in some ways.”

But he makes an effort not to work with galleries that have an air of pretension.

"I have a lot of fans that are 15 year olds," he says. "Obviously, they're not going to come in here and buy a $15,000 photograph...I want them to have the same experience as the people who came in here to buy (work)."

In the back of the Miller Gallery, one image depicts a woman sitting elegantly on a bench reading a red book. She wears a light blue dress that conceivably could have been pulled straight from the storyboard of Disney’s Cinderella. Lush greenery surrounds her and the fallen leaves seem almost too perfectly placed. But that's not the case. 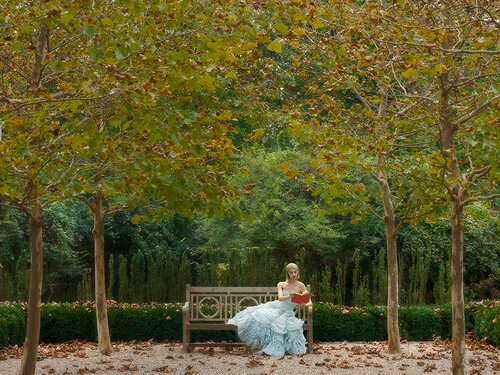 Taken in Cincinnati’s Indian Hill neighborhood, Shields says the moment happened by circumstance. Having shot another photograph that day at his friend’s property, he stumbled upon the area and envisioned a photograph. His friend just so happened to have the book.

“We took a bunch of other pictures that day, but to me, that was the one,” Shields says. “And what I like about (moments) like that is that she had that book for 20 years...but at that moment and exact day, that was the time it existed for a photo.”

Beyond the frame, many of Shields' works carry similar stories of spontaneity. Each captures their own fantastical moment in time — be it a lion gazing into his camera's lens or a foot clad in a ruby slipper hovering over an agape mouth, which catches a stream of sparkles.

For more info on Fairytale and gallery hours, visit millergallery.com.