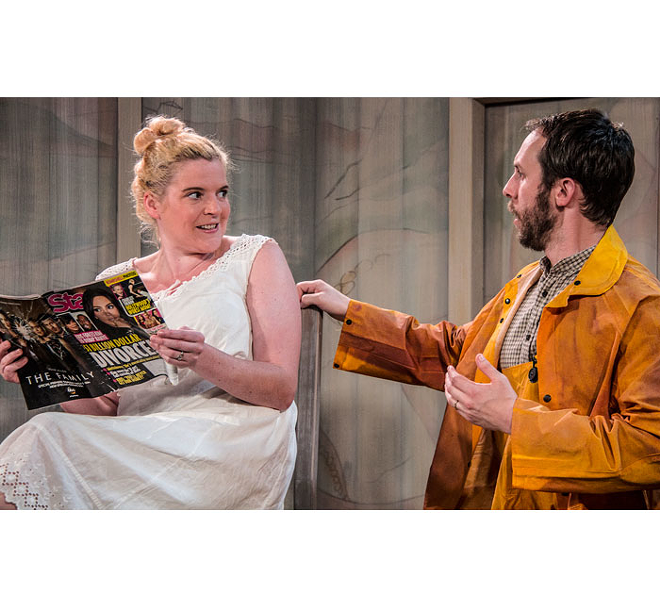 The animals are still in charge at Know Theatre as The Fisherman’s Wife concludes its run on Saturday evening. Steve Yockey’s absurdist play is more like something you’d seen in the Cincy Fringe (which Know manages), a “sex farce with sea creatures.” It starts off like a domestic drama with a big argument between a fisherman’s wife with a healthy sexual appetite and her clueless husband, but it spins out into some pretty bizarre antics involving interspecies sex and a few more twists. So it’s not a show for people looking for happy-go-lucky entertainment. But I gave it a Critic’s Pick. It’s very funny if your sense of humor can accommodate the twists and turns. Tickets: 513-300-5669.

Some other animals will take over at Know on Monday evening when trueTheatre presents trueANIMAL, with a collection of real, animal-related tales, 10-15 minutes long, told by five different people who have experienced them. These intimate evenings, designed to build community, are storytelling at its fundamental best, hosted by Dave Levy and Jeff Groh. As they like to say, “Everyone has a story to tell. What’s yours?” Tickets: 513-300-5669.

On campus at Northern Kentucky University, the Commonwealth Theatre Company continues its season of summer theater with Rodgers and Hammerstein’s Some Enchanted Evening, a sampling of the best songs from the guys who pretty much defined the Golden Age of Musicals. Staged by Ed Cohen and Dee Anne Bryll, this is sure to be an entertaining evening. Dinner is served at 6:30 p.m.; the show gets started at 8 p.m. in NKU’s Stauss Theater. Through July 24. Tickets: 859-572-5464.

A little north of NKU at Highlands High School in Fort Thomas, you’ll find the second weekend of this summer’s C.A.S.T. production (that’s the acronym for Commonwealth Artists Summer Theatre) put on by high school kids from around the Tristate. They’re staging Monty Python’s Spamalot, a raucous, ribald musical retelling of tales of King Arthur and his Round Table knights in pursuit of the Holy Grail. A lot of youthful energy could make this production a lot of fun. Through Sunday. Tickets: 866-967-8167.

If you’re on Cincinnati’s West Side, you might check out Green Day’s American Idiot, based on a Hard Rock album about disaffected young men, staged by Sunset Players at the Arts Center at Dunham (1945 Dunham Way, Western Hills, tickets: 513-588-4988). East Siders can have some good laughs at Mariemont Players’ Walton Creek Theatre (4101 Walton Creek Rd., Mariemont, tickets: 513-684-1236) with a production of The Complete Works of William Shakespeare (Abridged). These shows continue onstage this weekend and next.