Free temporary exhibition 'Shakespeare and the Queen City' opens Friday at the Cincinnati Museum Center, and a pair of favorite shows from the Winter 2017 round of Serials! returns to Know Theatre. 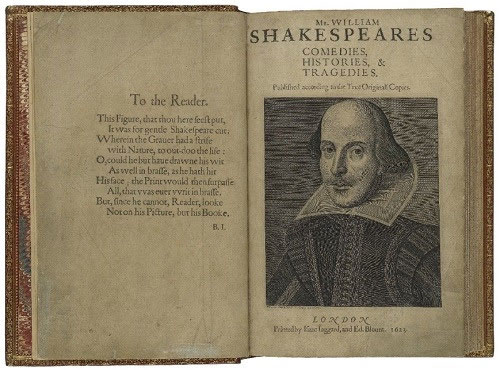 Most Cincinnati stages are dark this weekend as local companies prepare for their opening productions in early September. But local theater fans can take in a varied set of events if it's theatrical entertainment they’re seeking.

Let’s start with the Cincinnati Museum Center. What’s that, you might be saying? Is there theater there? Well, kind of. It’s a free temporary exhibition opening today: Shakespeare and the Queen City. It features an original “First Folio,” the first published collection of Shakespeare’s works. Printed in 1623 (just six years after the playwright’s death), there are only 234 known copies that survive. Surrounding this literary and historic treasure, the exhibition will examine Shakespeare and how his plays, stories and characters have resonated, evolved and been adapted over time — including their influence on Cincinnati. There’s a lot of Shakespeare happening this fall — A Midsummer Night’s Dream will be the first production at Cincinnati Shakespeare Company’s new theater; Cincinnati Playhouse opens its season with Shakespeare in Love; Cincinnati Ballet will stage Romeo and Juliet; and in March, while Cincy Shakes produces Othello, Ensemble Theatre will present Red Velvet, a play about the first African-American actor to portray the tragedy of the jealous Moorish general and his doomed wife Desdemona. The Museum Center is working closely with Cincy Shakes for this exhibition (on view through Oct. 29), which also has a stage area for brief performances and opportunities for visitors to try their own hand and a bit of acting with props and scenery. Although much of the former train station is closed for renovation, the exhibition space remains open — and this is an unusual free opportunity to see this historic volume.

If you’re yearning for something simply entertaining, Know Theatre has two offerings this weekend, returning a pair of favorite shows from the Winter 2017 round of Serials! 6: Lightning Cube, its episodic entertainment by local playwrights. This time they’ve been turned into fully formed one-act plays. Tonight at 8 p.m. and Sunday at 3 p.m. you can see Space Porn 2000: A Crowdsourced Musical by James Allen and Robert Macke, the tale of a pair of struggling writers who seek to get beyond failure with a new show that includes some serious risk — plus a new ending. On Saturday at 8 p.m. it’s Ben Dudley’s Retention of Disbelief, a comedy with “at least two new jokes.” Alex and Diane have their ups and downs (mostly downs), and now Alex can no longer enjoy fiction in any form. That leaves him unable to escape from several guilty acts including unfaithfulness and job loss. Tickets ($15) at knowtheatre.com.

If you haven’t caught them yet, this is the final weekend for The Drowsy Chaperone at the Warsaw Federal Incline Theater and The Full Monty at the Carnegie in Covington.