From an 1869 spirit photographer to the ghost of a villainous English king, local theaters are getting slightly spooky this weekend. 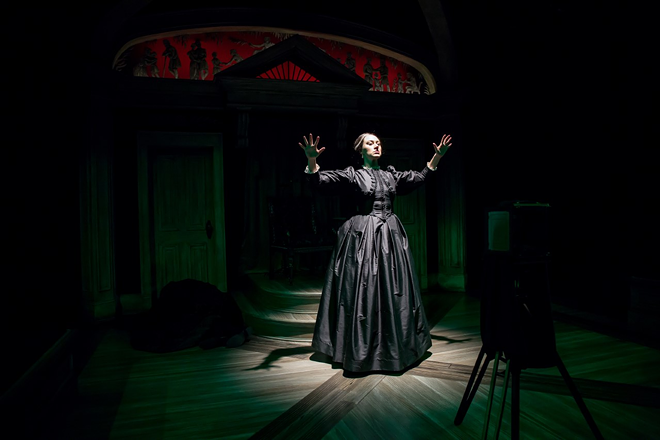 Photo: Mikki Schaffner
Whitney Maris Brown as Mrs. Sumler
It’s not Halloween — not even close — but there are numerous ghosts haunting Cincinnati stages this weekend. Let’s do a quick run-through as you consider your theater options for tonight through Sunday.

The most overt haunting is happening in Summerland at the Cincinnati Playhouse. It’s a world premiere about a “spirit photographer” in 1869: Is he a charlatan preying on vulnerable, grieving people or does his work actually reveal spirits hovering nearby, just back from “Summerland,” a place of repose before moving on to heaven? Arlitia Jones’ new play is a well done mystery with some fine acting, especially by Whitney Maris Brown as the photographer’s mysterious, manipulative wife. Read more about the show here. Through Sunday. Tickets: 513-421-3555.

The ghost of a villainous English king, Richard III, is roaming the stage and venturing into the audience at Cincinnati Shakespeare. Actor Billy Chace is giving the violent 15th-century monarch a vividly psychotic presence as the company completes its chronological staging of Shakespeare’s history plays — only the second theater in America to do so. Check out my review here. Through March 11. Tickets: 513-381-2273.

The touring Broadway production of Something Rotten! portrays Shakespeare as a kind of Rock star in this very amusing rendition premised on a jealous fellow playwright inventing musical theater to beat the Bard at the fame game. There’s a sham seer, Thomas Nostradamus, who gives some whacked advice about the future, and the results are hilarious. I gave this one a Critic’s Pick. Final performance is Sunday. Tickets: 513-621-2787.

Ghosts of a more recent vintage are onstage at Ensemble Theatre for When We Were Young and Unafraid. It’s a drama set in 1972 in a secluded B&B that’s actually a shelter for abused women. In some ways it seems like a long time ago, but the story remains timely in today’s world, and it’s a reminder that human nature doesn’t change all that much even after 40-plus years. You can read more in my Curtain Call column in this week’s CityBeat. Through March 12. Tickets: 513-421-3555.

A few more legendary characters can be found on other stages this weekend. The Warsaw Federal Incline Theater in E. Price Hill wraps up its staging of The Rocky Horror Show on Sunday, featuring Brad and Janet, Riff Raff and, of course, Dr. Frank N. Furter. Plus, CCM’s musical theater program presents a pair of legends from the early days of Hollywood, director Mack Sennett and silent-screen star Mabel Normand in Mack and Mabel. It’s happening at UC’s Corbett Auditorium this weekend only. Final performance is Sunday at 2 p.m. Tickets: 513-556-4183.