Chelsea Marcantel’s 'Airness' crafted a set of characters with grand personas and gave them very human backstories, while Molly Smith Metzler’s 'Cry It Out' poignantly portrayed a pair of very different new-neighbor moms. 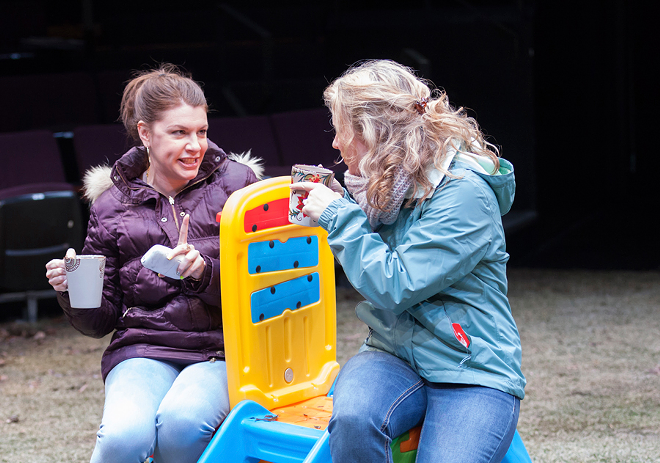 Photo: Bill Brymer
Andrea Syglowski (left) and Jessica Dickey in "Airness"
I like to be surprised. That’s why I enjoy annually attending the Humana Festival of New American Plays at the Actors Theatre of Louisville, where six full-length productions are premiered.

Advance descriptions tantalize but often don’t do justice to the world premieres. I’ve attended this celebration of new plays for two decades and seen more than 100 productions. Some I vividly remember; others have evaporated entirely.

This year, I was pretty certain that Chelsea Marcantel’s Airness would be one of those that wouldn’t stick. It’s about an air guitar competition. Here’s the published description: “When Nina enters her first air guitar competition, she thinks winning will be easy. But as she befriends a group of charismatic nerds all committed to becoming the next champion, she discovers that there’s more to this art form than playing pretend. Following her mission to shred or be shredded, Airness is an exuberant reminder that everything we need to rock is already inside us.” Come on, I thought. Air guitar? Really?

The play’s setting — a well-stocked dive bar with a tiny stage — didn’t promise anything more than a fun ride through some Pop tunes with guys faking dramatic moves. But this was surprise No. 1 for me.

“My favorite thing is a small tribe of people who have their own rules and values that are more important to them than anything outside the tribe,” Marcantel says. “It just so happens that this tribe wears a lot of leotards and wigs and jumps around onstage. I started thinking about what a fun world that would be to live in.”

She dug into the six “pillars” of air guitar, the rules guitarists live by: artistic merit, originality, feeling, technical ability, charisma and “airness.” Each character came to epitomize one of these, with “airness” being the most difficult to define. Her script notes suggest it’s “the extent to which a performance transcends the imitation of real guitar and becomes an art form in and of itself.”

Marcantel crafted a set of characters with grand personas and gave them very human backstories. Nina, the show’s central character, evolves from a guitarist in a real band whose initial motive is personal and selfish to someone who attains self-awareness that validates her performance.

That’s a pretty solid message, and this production, staged by Actors Theatre’s associate artistic director Meredith McDonough, brings these characters to life while providing plenty of humor and humanity along the way.

Another Humana production, Molly Smith Metzler’s Cry It Out, portrayed a pair of very different new-neighbor moms — Jessie and Lina — cooped up with their babies, coming together for coffee during naptime. The title references a child-rearing philosophy of letting babies wail until they’re worn out instead of comforting them. But it applies to more than babies, and there’s some serious, deep-seated wailing going on elsewhere in the moms’ neighborhood with another new mom and her beleaguered husband.

Truth be told, this struck me as a soap opera that I’d have a hard time connecting with. Surprise No. 2. The quality of the actresses playing the two moms — Jessica Dickey as Jessie, an attorney on leave from a demanding law firm, and Andrea Syglowski as Lina, a hospital clerk sharing an apartment with a new baby, her boyfriend and his likely alcoholic mother — made it relevant. While from different worlds, Jessie and Lina find commonality.

Cry It Out (publicized as “a darkly funny comedy”) went well beyond my expectations, especially when Jessie and Lina disagree about another woman who seems disinterested in mothering her baby. The play has a lot of humor, carried off in a wonderfully naturalistic way by Dickey and Syglowski (the production was staged by guest director Davis McCallum), but it ends on a somber note that leaves a poignant question hanging in the air about the impact of mothers’ decisions on their children.

My assessments of other Humana Festival plays can be found online. But Airness and Cry It Out were useful reminders that one of the genuine pleasures of theater is meeting and coming to understand people with very different perspectives from your own.