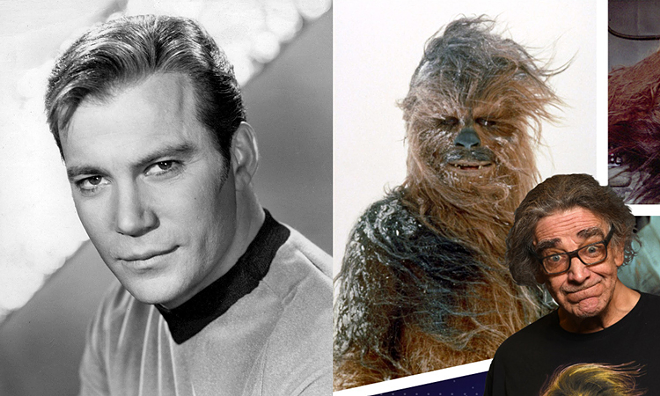 It's Star Wars versus Star Trek in Cincinnati this September.

The Cincinnati Comic Expo will be bringing in Peter Mayhew, who played Wookiee warrior Chewbacca in the Star Wars film series, when the Expo is held Sept.14-16 at the Duke Energy Convention Center. Meanwhile, William Shatner will be coming to the Taft Theatre on Sept. 22 to screen and discuss his classic 1982 film Star Trek II: The Wrath of Khan, in which he played Admiral Kirk of the Enterprise.

The 7-foot-2-inch Mayhew began portraying Han Solo’s co-pilot Chewbacca in 1977’s first Star Wars movie and continued playing him, when the screenplay called for it, through 2015's The Force Awakens. He then retired from the role. He will be at the Cincinnati Comic Expo all three days; this is his second time here. The expo itself began in 2010. For more information, visit cincinnaticomicexpo.com.

Shatner had earlier begun playing Captain James T. Kirk, his most famous role, on the Star Trek TV series. As part of the Taft Theatre discussion, he will take questions. While this is primarily a Star Trek event, the multi-talented Shatner might respond, if asked, to questions about his version of Elton John's "Rocket Man," his experiences filming Priceline commercials and his appearance in the 1966 Esperanto-language movie Incubus. For tickets/more information, visit tafttheatre.org.

No word yet if the two will meet up in space during their Cincinnati comings and goings.