Storytelling vs. Accuracy in Playhouse in the Park's ‘Lifespan of a Fact’

"The Lifespan of a Fact" is designed for laughs, but the play has a provocative undercurrent regarding issues that make it a compelling piece of theater for contemporary audiences. 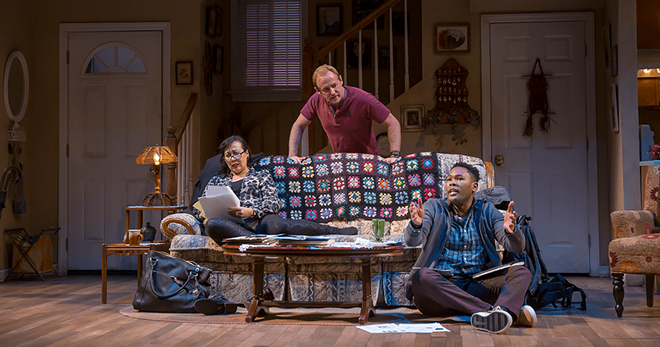 Mikki Schaffner Photography
From left: Kate Rigg as Emily Penrose, David Whalen as John D'Agata and JuCoby Johnson as Jim Fingal in " The Lifespan of a Fact."
CRITIC’S PICK

In an era when “fake news” is a daily, top-of-mind topic, the freshly minted stage comedy The Lifespan of a Fact is a timely exploration of just how far the boundaries of storytelling and journalism can be pushed. The play, well received on Broadway just a year ago, is based on a book by writer John D’Agata and fact checker Jim Fingal that chronicled their actual sparring — over a period of a half-dozen years — regarding an article about a teenager’s Las Vegas suicide that had been first rejected by Harper’s Magazine and then landed at a San Francisco publication, The Believer, and was finally published in 2010.

Converted into an 85-minute script by Jeremy Kareken, David Murrell, and Gordon Farrell, the show compresses their epic philosophical battle to a five-day fight between a maniacal fact checker with a pressing deadline and a writer whose inclination is to fudge facts as a means to come closer to his version of ultimate truth. Their humorous wrestling match, augmented by D’Agata’s arrogance and Fingal’s nervous but naively virtuous demeanor, is refereed by Emily Penrose, a distracted veteran editor who is eager for a final big splash at a glossy New York magazine. (The Cincinnati Playhouse’s production opens on a sleek editorial office designed by Todd Rosenthal, offering a panoramic view of the New York skyline.)

Due to the disintegration of editorial support that’s sadly pervasive at newspapers and magazines everywhere today, Penrose resorts to the eager Fingal, elevating him from his lowly internship to a position of editorial authority. She asks him to be sure names are spelled correctly and dates check out, but he quickly explodes the task, producing a 130-page spreadsheet that annotates factual errors and other journalistic transgressions in D’Agata’s “article.” He insists he is an “essayist,” not a journalist. D’Agata pompously objects to Fingal’s insistent questioning and suggestions for sharper accuracy, justifying the tweaked and twisted facts as devices that will enhance the impact of his storytelling. Their exchanges escalate in intensity from cleverly projected emails to an angry ping-pong of phone calls, and finally to a face-to-face meltdown.

The Playhouse production, staged by veteran director Wendy C. Goldberg, features three fine actors: JuCoby Johnson as Fingal, Kate Rigg as Penrose and David Whalen as D’Agata. (The latter portrayed another writer — the imprisoned romance novelist Paul Sheldon — in the Playhouse’s 2018 production of Misery.) They don’t have the starry credits of the Broadway cast, which included Daniel Radcliffe (Harry Potter) as Fingal, but they are an excellent ensemble: Johnson navigates Fingal’s hyper path from uncertainty to crazed, committed excavation with finesse, growing in his conviction as he battles with Whalen’s self-important writer who justifies his manipulations of reality in ways that are revealed to be rooted in his own sad personal arc.

Rigg plays the tough-minded, exasperated editor convincingly, refusing to give up personal details and stepping in to mediate when Fingal ends up in D’Agata’s tawdry Las Vegas home, where he took up residence to care for his dying mother (another detailed design by Rosenthal). Rigg’s Penrose, stepping in as a kind of mom disciplining her combative children, strives to bridge the gap between the two and comes close to drawing the opponents into a kind of appreciation of one another’s perspectives. Nevertheless, the play ends with a kind of shrug, leaving a final decision to the audience.

The Lifespan of a Fact is designed for laughs, but the play has a provocative undercurrent regarding issues that make it a compelling piece of theater for contemporary audiences. The five-day timespan produces a comedic pressure cooker that’s not all that believable: Penrose has another story in her hip pocket that could be used to meet the printer’s deadline, and no convincing reason is offered as to why D’Agata’s piece has to be published in this particular issue. Nevertheless, the swiftly told story keeps audiences engaged between the poles of journalistic honesty and poetic license. It’s the kind of show that will have audience members arguing after the curtain call.

The Lifespan of a Fact, presented by the Cincinnati Playhouse in the Park, is onstage through November 16. Tickets: Cincyplay.com.