The workplace comedy explores how each employee feels about their co-workers, customers, the around-the-clock work schedule, the corporate owner and the gentrifying neighborhood. 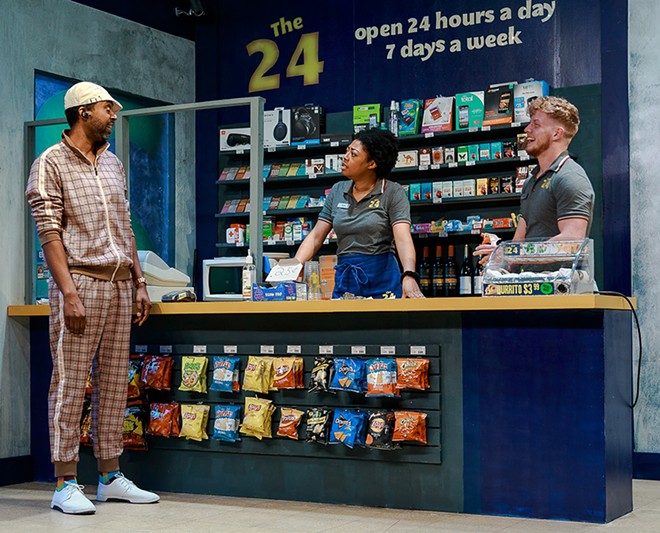 Decoding the title of the world premiere show The Twunny Fo', currently onstage at Know Theatre, isn’t a big challenge: It’s a workplace comedy about a convenience store — “The 24,” open 24/7 — and a group of employees who are resentful about working there, especially since its acquisition by a company that operates numerous locations.

Playwright A.J. Baldwin lays out in fast-talking contemporary jargon how each employee feels about their co-workers, several unseen customers, the around-the-clock work schedule, the corporate owner and the gentrifying neighborhood.

The events swirl around pragmatic Tyra (played by Baldwin), struggling to complete her MBA as a ticket to leave the neighborhood behind. She works nights at The 24 to make ends meet, trying to study in the bleak, empty, third-shift hours when customers are few and far between, but her co-workers distract her with constant chatter and unwelcome flirtation.

The show was initially conceived as a Fringe Festival production, but Baldwin was encouraged to expand it into a full-length script. It’s currently available to other theaters through the National New Play Network.

Rissa (Jasimine Bouldin) is Tyra’s self-centered co-worker and chatty, opinionated friend who offers a nonstop stream of opinions and observations about everything and everyone. She keeps things interesting, even though she’s not a terribly dependable co-worker. Rissa has derogatory nicknames for people she doesn’t care for, and she thinks nothing of showing up late or taking off for a nail appointment or other activity she deems more important than work.

Kingsley (James Creque) was the store’s owner until The 24 bought him out. He wanders in frequently as a nosy and judgmental customer, often acting as if he’s still in charge. He straightens products on the shelves, chastises the staff about their lackadaisical, irresponsible attitudes and offers his own wisdom about how things should be run.

Tyra, Rissa and Kingsley are Black. Shaw (Eli Lucas) is an empty-headed, self-centered blond, white guy, replete with supposedly smooth moves. He repeatedly hits on Tyra, who treats him with contempt. Despite his cavalier ways, he gets preferential treatment from the new company, which irritates both women.

The first act of The Twunny Fo' ends with a shocking and traumatic event that serves as a catalyst for action in the second act, when we find Kingsley back as an employee in the store he once owned. Tyra is angry and grieving, Kingsley is resentful and overbearing, Rissa’s whereabouts are unclear and Shaw is his usual obnoxious self.

An oblivious conference-call pep talk from The 24’s corporate office sharpens the focus and infuriates Tyra. She concocts a take-charge plan, drawing on her business acumen, to address her anger with Kingsley’s patronizing behavior and changes in the neighborhood that make it increasingly tough for long-term residents. The Twunny Fo’ explores some serious questions about responsibility to self-respect and to the broader community.

Andrew Hungerford’s scenic and lighting designs support the story. The convenience store looks familiar, although perhaps not quite shopworn and neglected enough. Bagged snack products are hung too neatly, one by one, and the overall ambience is a too antiseptic. (The staff repeatedly sweeps the floor, which has no visible grime or debris.) But Hungerford’s lighting effectively conveys several moods, especially pensive moments between scenes as the story unfolds.

Director Candice Handy might have done more to contain the energy and anger onstage, keeping a tighter focus on where the show’s message eventually lands. After two hours of angst, sarcasm and bickering, things wrap up a little too neatly and simplistically. Nevertheless, there are some meaningful thought-provoking lessons to be garnered from this show.

In an interview posted online by Know Theatre, Baldwin explains her intention to write about the commodification of Black women in American society.

"When I started writing The Twunny Fo', I was working in a convenience store myself, so there was lots of inspiration there," she says. 'I honestly had no idea what I wanted the finished product to look like, I just knew I wanted to write something that spoke to the commodification of Black Women in this society. Then I was bombarded (like many of us were) by all the chaos that was happening in America in 2020, and learned I had plenty of things I needed to say."

That issue is in the show, but it gets entangled and often diluted with some of the larger social issues. That being said, Baldwin’s performance as Tyra, the role she developed and brings to life in this production, has an earnest commitment that feels commendable and real.

The Twunny Fo', presented by Know Theatre, continues through May 8, both onstage and via livestream at knowtheatre.com. In-person tickets start at $15 and streaming starts at $10; tickets for both are $5 during the theater's Wednesday Welcome Experiment shows. Know Theatre is located at 1120 Jackson St., Over-the-Rhine, knowtheatre.com.