While this show exploring spirit photography is technically beautiful, the script is not as adroit, but the subject matter is interesting and raises complicated questions. 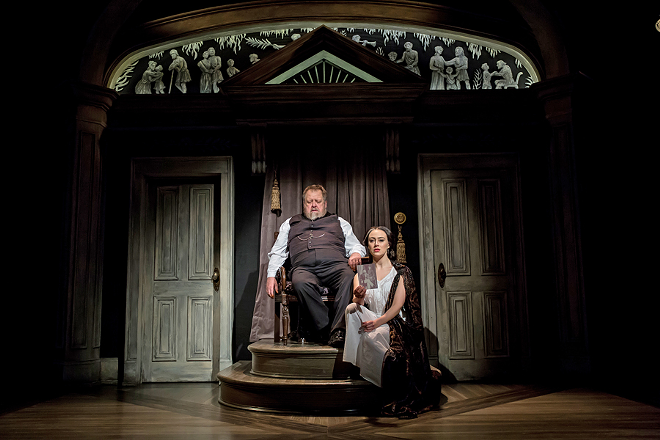 Before Playhouse in the Park’s world-premiere production of Arlitia Jones’ Summerland even began, I had taken so many notes on Paul Shortt’s polished set designs that a fellow audience member asked if I was a set designer myself. Shortt’s staging lends a gothic mood to the show before a single line is spoken. Sinister red light spills from an open doorway. The furniture is sparse — a bench, a sturdy chair. Pointed at the chair: a camera.

In 1869, when Summerland is set, photography was still a burgeoning art form not entirely understood by the public. That lack of understanding, coupled with a country’s collective grief following America’s Civil War, paved the way for a new industry: spirit photography.

Missing the husband you lost at Gettysburg? Visit the studio of an artist such as William H. Mumler, have your photograph taken and, with any luck, the developed image will show dear Johnny standing behind you, sending his love from the idyllic pagan afterlife of Summerland.

Spirit photography, the entrepreneurial Mumler and the myth of Summerland (pronounced “Summal’nd”) are plucked from history for this play. Mumler profited from the lonely and the hopeful, boasting clients as notable as Mary Todd Lincoln. His work was later proven to be a hoax that used a double exposure process to cast the ghostly images.

From these stories and accounts, playwright Jones has woven a tale of historical fiction. In Jones’ Summerland, Mumler (Michael Rothhaar) is no con artist, rather a grieving father himself. He is a man of passion, principles and belief, who just happens to profit by his work.

His foil is Joseph Tooker (Billy Finn), a skeptic hell-bent on exposing Mumler as a fraud and a swindler. Tooker has his own grief — he was a soldier in the Civil War and is battling survivor’s guilt — and he channels that emotion into a restless need for justice, proof and answers. As interesting as this opposition is on paper, onstage these two characters are difficult to care about. Finn’s Tooker seems more bark than bite, and Rothhaar’s Mumler is full of sad bluster.

The first half of this play concerns itself with these men and their argument, with very little to break up the tension. Summerland takes place in the Playhouse’s more intimate venue, the Thompson Shelterhouse Theatre, with no audience member more than seven rows from the stage. This intimacy can make the space crackle with energy, but in the case of Summerland, it can feel tiring. This is a show with weight and drama, and very few moments of levity. With the exception of an interesting scene wherein the audience watches a daguerreotype image being made, there is not much for these actors to do onstage besides stand and harangue each other.

And so it is a welcome shock when Mumler’s wife (Whitney Maris Brown) bursts onto the scene mere moments before intermission, in an entrance that spellbinds the audience — and the other characters. Think Lily Munster meets Lady Macbeth. As the playwright notes in the program book, women were key players in the Spiritualist Movement of the late 1800s, and in Summerland, Mrs. Mumler is the power behind her husband’s throne. I am hesitant to ruin any of the surprise around the play’s greatest mystery, so suffice to say that she and actress Brown are Summerland’s saving graces. They bring the chills and the intrigue lacking in the first half.

Director Michael Evan Haney has a technically gorgeous show in Summerland. I have already gushed over the sets (oh, the bas-relief!), and Matthew M. Nielson’s sound design is haunting. Kirk Bookman’s lighting design is downright inspired, radically changing the small theater to feel as clinical as a photographer’s darkroom or as warm as the candles of a séance. The script is not as adroit, and the show feels long, but the subject matter is interesting and raises complicated questions. Which is more dangerous: cold, hard facts or fairy tale belief? Should we trust our eyes over our hearts? If a lie helps us heal, is it wrong to believe it?

SUMMERLAND, presented by Playhouse in the Park, continues through March 5. More info/tickets: cincyplay.com.