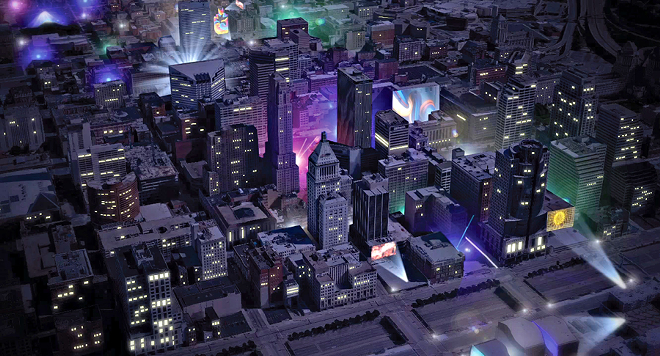 Photo: Provided
"BLINK" is one of the most ambitious visual art events of the season, consisting of light projection mappings on buildings, interactive art sculptures, new murals and other art displays.

There are two especially noteworthy and eagerly awaited museum exhibits on tap for Cincinnati this fall — retrospectives of work by the avant-garde Dutch fashion designer Iris van Herpen at the Cincinnati Art Museum and the idealistic, community-minded street artist Swoon at the Contemporary Arts Center.

But the single biggest and most ambitious visual art event of the season — the whole year, really — is occurring out on the streets of downtown and Over-the-Rhine from Oct. 12-15. It’s called BLINK and it consists of at least 70 light projection mappings on buildings; interactive art sculptures created by local, national and international artists; new murals; and other art displays. Like Lumenocity, the light projection mappings will be overseen by Brave Berlin, but many will be created by others. ArtWorks is supervising the interactive art sculptures, and Agar event-production company is handling the murals. The Cincinnati USA Regional Chamber is producing the event; the Carol Ann and Ralph V. Haile Jr./U.S. Bank Foundation is a major funder.

BLINK will be free (save for one special installation) and occur from 7-11 p.m. each night, roughly along the streetcar route from The Banks/Underground Railroad Freedom Center to the south and Findlay Market to the north. The event is designed for walking and multiple visits rather than just a single ride-through, as some of the individual light projection mappings will last three to five minutes.

To date, five artist installations and light projection mappings have been announced. We Have Become Vikings will do two: “King City” will honor King Records behind Saint Francis Xavier Church (607 Sycamore St.) and its “Our Own Homecoming” (119 E. Court St.) will feature the Modernist art of Charley Harper. Rounding out the remainder is Formstone Castle, a collective of artists and bikers from Baltimore, who will offer rides on a pedal-powered, LED light-bedecked mobile couch along the BLINK route; the DJs/artists of Hebron, Ky.-based Forealism Tribe, who will have dance parties on the Light Ship, constructed from recycled Plexiglas mirrored cuboids, at 1674 Central Parkway; and Toronto-based Lateral Office, which will present “Impulse” — illuminated seesaws that make sounds while ridden — outside the Freedom Center. For more information, visit blinkcincinnati.com.

Meanwhile, the Iris van Herpen show at the art museum, Transforming Fashion (Oct. 13-Jan. 7, 2018), introduces the 33-year Dutch fashion designer who interned with Alexander McQueen and has created outfits worn by Lady Gaga and Beyoncé. Her work, sometimes created with the aid of 3-D printing but also using traditional handwork, has a sculptural element as a result of her collaboration with architects, artists and engineers.

This can be seen in such imaginatively named pieces as “Refinery Smoke,” a 2008 storm cloud-like dress of untreated metal gauze, cow leather and cotton; “Chemical Crows,” a 2008 skirt collar formed from the ribs of children’s umbrellas, industrial boat yarns, cow leather and metal eyelets; and “Capriole,” a 2011 dress of transparent acrylic sheets, tulle and cotton.

Transforming Fashion covers van Herpen’s work from 2008-15 and features 45 outfits and nine pairs of shoes. The art museum’s Cynthia Amneus has curated the show, which has been organized by Atlanta’s High Museum of Art and The Netherlands’ Groninger Museum. The art museum has high hopes for this — it’s a ticketed show.

The Contemporary Arts Center kicks off its 2017-18 season with a major survey of the work of SWOON (Sept. 22-Feb. 25, 2018), who in the course of 19 years has moved from drawings, prints and murals to large-scale public installations and socially driven site-specific projects in Haiti, Kenya, Europe, New Orleans, Braddock, Penn. and elsewhere. The large exhibit, curated by the CAC’s Steven Matijcio, will find ways for Swoon’s work to engage and interact with the museum’s celebrated architecture. For instance, one of Swoon’s past projects is “Swimming Cities of Switchback Sea,” where she brought the phantasmagorical raft Alice to journey aroung Manhattan. At least elements of that raft and another one will be used for new installations at the CAC, which also will show a video of the raft project.

At the city’s other art museum, the Taft, the fall show is Elegant Geometry: British and American Mosaic Patchwork Quilts (Oct. 21-Jan. 21, 2018). It features 21 quilts highlighting the way that women wrapped and sewed cloth around identically sized, geometrically shaped paper pieces and then stitched the pieces into intricate patterns. The earliest quilts in the exhibition originated in 18th-century England; American examples date through the 19th century and were made by women from Eastern and Midwestern states.

Here’s a selective look at some of the other visual art exhibits and events slated for this fall:

Coming off its triumphant summer show, Distant Horizons: Pioneers of Psychedelic Art, the Carl Solway Gallery introduces a new artist, Los Angeles-based painter Cherie Benner Davis, in the show Super Natural — New Paintings (Oct. 6-Dec. 31). She uses saturated colors and references such as Southern California art movements of the past as Finish Fetish and Light and Space, as well as Pop Art and Georgia O’Keeffe. The show is concurrent with ILLUMINATED (space), featuring nine artists who use incandescent bulbs, LED bulbs or screens, video projection or candles in their art.

And the always-inventive Wave Pool in Camp Washington gets its fall season underway this Saturday by transforming its gallery space into The Gathering Space (Aug. 26-Sept. 28) — a temporary bookstore, photography studio, tea shop and community “living room” presided over by artist-in-residence Andrew McKinley, owner of San Francisco’s Adobe Books. Several specific events are planned before the installation closes. Also opening on Saturday, and scheduled to last through mid-September, is Utopia Remains, a show of photographs by Katherine Cunningham that considers what’s left after the demise of idealistic communities. ©