Winners will get to represent Cincinnati in the All-American World Championship race in Akron this July. 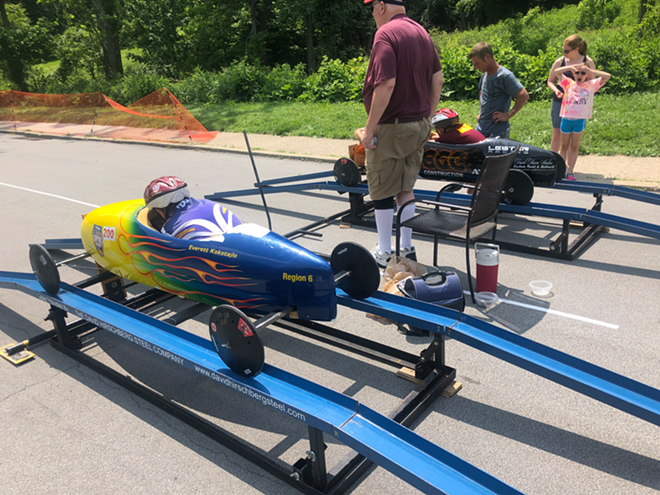 If there’s anything essential to know about soap box derby racing in Cincinnati, it’s that no matter how many times it goes away, it always finds a way to make a triumphant return.

After a brief cancellation in 2020 due to the coronavirus pandemic, the Cincinnati Soap Box Derby will be making its 50th run on Sunday, June 6 along Observatory Avenue in Ault Park.

Established in 1934, Cincinnati is said to have been one of the very first cities in the nation to host a soap box derby race. And COVID-19 is far from the first thing that caused a hiatus. Notably, the race paused for World War II and again between 1979 and 2005 after interest in the sport declined from its peak popularity in the 1950s and '60s. The race returned in 2006.

Race Director Stan Kokotajlo considers soap box to be a great sport for both kids and families, and has plenty of firsthand experience. Kokotajlo originally became involved in the activity when his two sons began racing in soap box rallies all over the country during their youth. Immediately, the whole family was “hooked,” he says. 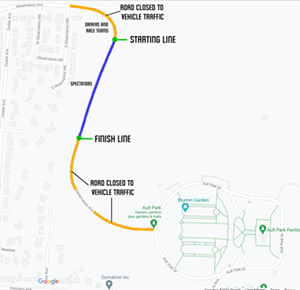 “It’s pretty exciting,” Kokotajlo says about the upcoming 50th race. “I knew that it was going to be a pretty significant milestone because most of us haven’t been able to race for too long, we have a good core of families interested in racing with us and we appreciate them and we love giving the community the opportunity to race for free.”

Races will commence at 9 a.m. Sunday with a weigh-in and two divisions competing throughout the day: Stock and Super Stock.

Size and age determines which division a racer can compete in. A Stock race, for instance, consists of younger drivers ages 7-13 years old, up to 5-foot-3-inches tall and 125 pounds. In Super Stock, drivers are ages 9-18 years old, up to 6-feet tall and up to 150 pounds.

Even with the Stock and Super Stock cars weighted to exactly 200 and 240 pounds, respectively, a soap box derby car can achieve up to 25-30 miles per hour, Kokotajlo says.

The Cincinnati Soap Box Derby also has several cars for participants to borrow, all of which Kokotajlo personally refurbished during lockdown last spring. The only other requirement for racers is to provide two crew members, usually high schoolers or parents.

What makes the 50th milestone even more special is that the race is back in Ault Park — its original midcentury racing location during the height of soap box derby’s popularity. Kokotajlo says that the park is ideal because of its square curbs that keep the cars on the track and its recent repaving.

“There’s two things I usually hear when I wear my derby shirt around town. First is, ‘Oh they still do that?’” Kokotajlo says. “The second is what older gentlemen usually say, which is, ‘I did that when I was in Cincinnati and I raced in Ault Park.' And then I tell them that we started racing there in 2019 and to come out and join us.”

The gravity racing track is about 750 feet long, very “point A to point B,” as Kokotajlo describes it. There are 20 racers between the two divisions, participating in a double-elimination competition. The winners of each category will represent Cincinnati in the All-American World Championship race in Akron this July.

Races in the 1960s could draw thousands of spectators, but numbers stay steady at a few hundred at Cincinnati races these days. At least a few families have joined the sport just because they happened to pass by Ault Park, Kokotajlo says. Once they join, they usually stay involved for years, even beyond the time that their children stop racing.

Kokotajlo’s sons, for example, will be in attendance on Sunday cheering the racers on.

“We have some families recently that have stopped racing but they still come out and help us race, setting up and tearing down,” Kokotajlo says. “We’ve got a good group of people right now that we hope will be racing with us for a few years.”