"The Other Thing" features eight artists, both local and not, who create illusions and challenge expectations as they move between media. 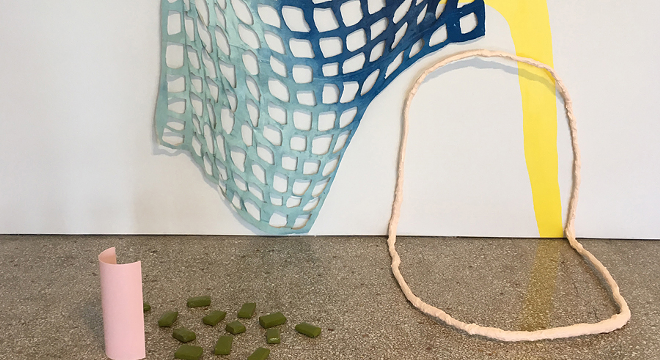 Installation by Alicia Little for "The Other Thing."

The Carnegie’s exhibitions director, Matt Distel, passes a papier-mâché video game case on the floor of the main gallery and imagines what visitors must be saying about him and the notion of opening the 2017-18 season with four shows and what seems like a cast of thousands.

“Distel has really lost control of his space! He’s not even cleaning up!” he jokes.

Of course, the realistic-looking case, made by Northern Kentucky artist Joey Versoza, is meant to be there. It’s part of The Other Thing, an enjoyable exhibit featuring eight artists, both local and not, who create illusions and challenge expectations as they move between media.

Alice Pixley Young activates rarely used staircases of The Carnegie by playing with video, 3-D-printed forms and light. Nick Fagan turns a line drawing into a sculpture. Modern quilter Heather Braunlin-Jones stitches a Minimalist painting. And an installation by Alicia Little spills from the wall to the floor as it morphs from painting to sculpture and from soft to solid.

“It looks like it’s one thing, but it turns out it’s the other thing,” Distel says during a walk-through with local painter/sculptor Michael Stillion, the show’s curator.

“It is what it isn’t,” Stillion observes.

“ ‘It is what it isn’t’ — the tagline that we should have used,” Distel says sardonically.

His second-guessing is understandable, because Distel is shaking up the galleries’ format. The Other Thing and text & subtext & big deal — the touching final collaboration between photographer Diana Duncan Holmes and her late husband, poet Timothy Riordan — continue through Nov. 19 as part of the rotating lineup. But, for the first time, Distel also has introduced season-long installations. My Arms are Like Joy Joy Joy Joy! and Andrey Kozakov: Trading Room are part of an effort to engage visitors in new ways.

The Carnegie’s exhibition season is compressed because it does not host shows over the summer and needs time to regroup after its popular two-day Art of Food fundraiser each winter.

“To get public programming built around exhibitions, it’s really difficult,” he says. “Having these shows up for a year (through July 1, 2018) means we can do things like a dinner, gallery talks and performances.”

Visitors of all ages can help Trading Room evolve as they make, take and leave notes, sock puppets, paper airplanes and other treasures in drawers that the Cincinnati-based, Ukraine-born Kozakov installed in a magical tree.

Distel also wants to open up networks for local artists. He was glad to find another “studio junkie” in Joy curator Derek Franklin of Portland, Ore., whose art was in the inaugural show at Northside’s Anytime Dept. gallery this summer. Over four days, Distel and Franklin visited the spaces of about 25 local artists. Franklin chose five of them for Joy, and added four from Portland and New York. Distel is pleased that even those who weren’t selected for this show now have connections across the country.

Like the temporary The Other Thing, the season-long Joy is about art trying to be something else, only Joy is social-minded rather than genre-focused. Art is a means of activism or meditation. The world is in trouble, but there are ways to deal, the artists suggest.

Inspired by the anarchist Bartolomeo Vanzetti, who protested low wages with the slogan “We cannot live on clams alone,” artist Amanda Curreri has tied mussel shells on sticks as noisemakers. Visitors are invited back to The Carnegie for food and talk on Nov. 12, or they can sign up in the gallery for one of Curreri’s CLAMS dinners on Oct. 26.

Throughout Joy, we notice other artists figuring out how to negotiate everyday life. Kristan Kennedy washes her dyed linen paintings as a way of embracing pure chance. Visionaries + Voices’ Romando Love writes poems about evil people. And Lydia Rosenberg of Anytime Dept. collects “The Right Tool for the Job” — an array of lock picks — on a ring.

Distel, meanwhile, hopes that he holds the golden key — one that allows the new gallery format to bring more people through The Carnegie’s doors.