Several times a week, the artifacts housed in Lower Price Hill’s Cincinnati Type & Print Museum are put to work. Metal pieces of moveable type — stored alphabetically and organized by font in vintage letterpress cabinets — are ready to be set and inked. Dense and sharply defined, each block of type holds infinite possibilities and has an equally impressive shelf life.

A collection of hundred-year-old machines lines the working museum, along with their original instruction booklets and photos of them in their prime. The printing presses range in size, some weighing tons, some small enough to fit on a table. It’s as if the room were sepia-toned — except for the two very focused women at a workspace in the center, surrounded by blocks of type and images, cans of ink and blank paper.

“Time to re-ink,” Tiffany Cupp says, as she stops pulling the impression lever on a tabletop letterpress mid-pump. “What do you think?”

Red ink solidly outlines the image, which shows Santa Claus stuffed halfway down a chimney and font that reads “Merry Christmas,” but it’s getting spotty at the center. Olivia Palmore looks up from hole-punching the decorative gift tags and agrees. They’ll keep the patchy image, though, as the tiny imperfections create a novel artisan effect.

Cupp and Palmore are enrolled in the Redeemed Home program, an initiative launched by BLOC Ministries in 2016 that serves women struggling with addiction, as well as former prostitutes and survivors of trafficking. Gary Walton, founder and owner of the Cincinnati Type & Print Museum, partners with BLOC to offer the women training and employment in the printing industry — an area in which Palmore incidentally had a pre-existing interest.

Photo: Katie Griffith
Blocks of type at the museum

“The first day I came in here I was almost crying because it was like Disney World to me,” she says as she carefully lifts embellished gift tags and places them on a table to dry.

Cupp inspects the ink plate and scoops a thick, red blob of rubber-based ink onto a palette knife. The squeal of the press rings throughout the room, clanging intermittently as Cupp hand prints each tag. A rhythm begins as the ink rollers reveal a cheerful holiday scene and Palmore ensures the finished products are in organized rows.

“It’s been amazing to be able to feel proud of myself and confident in my work,” Palmore says. “Having a (greeting) card business of my own has been a personal dream of mine for many, many years and I really didn’t know how or what to do with it. So for me to be a part of Redeem, this is a personal dream come true.”

Palmore has been working on her sobriety since 2018, she says. She joined Redeemed in July after exiting a toxic relationship and jumped at the opportunity to work for the museum. She began brainstorming business models with her roommates and co-workers, who thought a greeting card operation could be both fulfilling and successful.

By September, The Redeemed Letter Press was official and already seeing its inaugural Christmas card project come to life. The women designed more than 1,000 cards and gift tags, which will be sold at BLOC Coffee Company in Price Hill and at other local churches and holiday functions.

All profits are fed back into the Redeemed Home program. Palmore hopes a “quarantine card” project will follow the holidays, while normal operations are sustained with the production of generic greeting cards.

“The thing about Redeem is they really partner with you and come alongside you with everything you need,” Palmore says. “It’s not just sober living because sober living is just kind of a bed. Redeem provides different therapy, financial counseling, work experience, we do Bible studies together, we have weekly meals together. There’s a whole group of women who are going through similar experiences, and then women who are volunteers and staff who have come out of it and it’s just a whole tribe.”

BLOC has more than 20 programs that benefit people experiencing hardship in urban communities. While the initiatives are faith-based, participants don’t have to identify with a certain religion to qualify. Redeem assists 10 women at a time and goes above and beyond typical recovery programs by providing housing, basic needs, therapy and life skills, such as money management and job training.

The unlikely pair of printing and recovery stemmed from the museum’s Walton’s lifelong love of print and devotion to his faith. In 2011 he was ready to retire from full-time teaching at Cincinnati State. While he hasn’t been able to give up teaching altogether — he teaches printing — moving to part-time allowed his ideas for a museum to materialize. 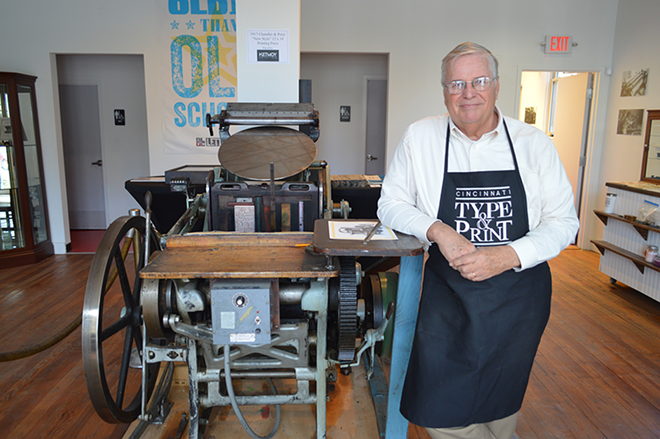 The Cincinnati Type & Print Museum celebrated its fourth anniversary this November and operates under a mission with three main purposes: to preserve the history of printing in Cincinnati and raise awareness of its importance, to give artists opportunity to create and learn letterpress and printing operations, and to provide training and jobs to people in Price Hill struggling with addiction.

“Our goal (with BLOC) is to flip Lower Price Hill to someday be, again, a very good blue collar community,” Walton says. “There’s a hundred and some museums out there that do demonstrations and displays and so forth, but without Redeem, it’s not a ‘working’ museum. Now, that arm of redemption is always there. I wouldn’t enjoy it as much as I do if we didn’t have the Redeem program.”

A lifetime of connections to the printing industry allows Walton to furnish the museum with dozens of letterpresses and other related machinery and supplies strictly through donations. Walton says his donors want to remain anonymous but that they represent several profit-leading printing companies in Cincinnati who see the value of having a letterpress museum.

Last year, the museum received $47,000, according to Walton, and because he doesn’t take a salary, that number is high enough to sustain operations. He says his expenses include rent, the Redeemed women’s salaries, and the salary of his recently appointed Assistant Director and Curator, Jacob Simpson.

Each of the museum’s purposes is equally important to Walton, but he really leans into preserving history and raising awareness. He loves to dust off his apron, straighten his posture, and pronounce, “This city was once the second-largest printing center in the United States.” And, of course, he yearns to see it rank there again. In hopes that his adoration for printing will be contagious, he graciously hands out copies of The Life and Works of Johannes Gutenberg, a book Walton authored about Gutenberg’s hand in inventing the moveable-type printing press in the 1400s and launching the printing revolution.

“I believe in giving things away,” he says, “and it will come back to you tenfold.” A prime example of how this motto works in his favor is the museum itself, which saw 600 visitors in 2019. Even with the threat of a pandemic and temporary closures, the number of visitors this year is trending to surpass that 600 mark.

In November, tragedy befell the museum when a car crashed into the building, damaging the foundation and second-floor office space. No one was injured, the presses were spared, and the establishment closed only briefly. Walton looks at the incident as an opportunity to rebuild and expand, highlighting his plans to create a men’s program, too.