SwimShady, Alby, and Manhattan are headed back to their natural habitat in early October. 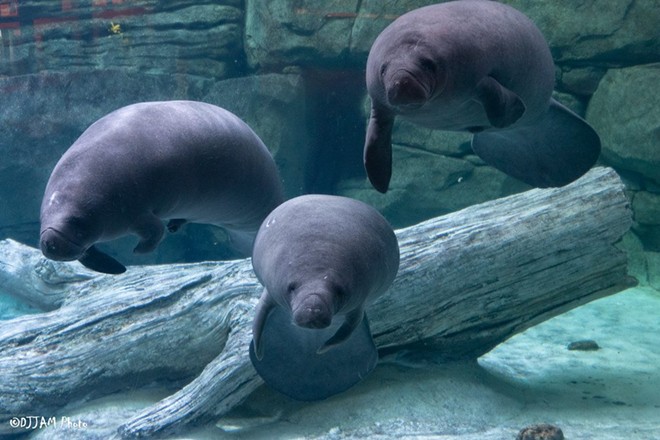 Photo: @DJJAM Photo via The Cincinnati Zoo
SwimShady, Alby, and Manhattan are returning to Florida.

You’ve only got a few more weeks to say goodbye to the Cincinnati Zoo’s three orphaned manatees before they return to Florida.

SwimShady, Alby, and Manhattan have been rehabilitating at the zoo for 18 months at Manatee Springs, and are returning to their native habitats in early October, per a release from the zoo.

Their time spent in the Queen City was part of the U.S. Fish & Wildlife Service’s Manatee Rescue & Rehabilitation Partnership (MRP). The zoo has been participating in this operation for two decades, and including the three leaving soon, 23 manatees have been cared for by the Cincinnati Zoo since they entered the partnership with MRP.

“Our primary goal, as a second-stage care facility, is to provide plenty of food and get the manatees to a healthy weight,” Cincinnati Zoo curator Kim Scott said in a release.

Scott says that the three big sea puppies have gained a combined total of 1,000 pounds, which makes sense as they’ve eaten around 166,158 pounds of food during their stay in Cincinnati.

SwimShady, Alby, and Manhattan are all males who were rescued from Florida. SwimShady weighed 198 pounds when he was rescued and is being released at 624 pounds, Alby started at 51 pounds and now weighs in at 746 pounds, and Manhattan began his journey at 62 pounds and is now 609 pounds.

Zoo officials say that 19 manatees have successfully been released in Florida since the start of the MRP and, in 2017, Florida’s manatee population was downgraded from endangered to threatened.

“The goal of the MRP is to rescue, rehabilitate, and release manatees, and we’re honored to play a role in this important conservation work,” said Scott. “In addition to rehabbing manatees, we get to educate and inspire visitors when they see these amazing creatures!”

The Atlantic coast manatee population has has “alarmingly high mortalities” recently with 1,100 dying last year and 600 so far this year according to the zoo. It is suspected that these deaths are due to a decline in food sources plus “human-caused threats” like boat strikes.

Visit manateerescue.org to donate and learn more about manatee rehabilitation.

The Cincinnati Zoo & Botanical Garden is located at 3400 Vine St., in Avondale. Tickets and more info at cincinnatizoo.org.