This Time Tomorrow expands on the potential of broad-reaching performance art, commissioning a variety of artists, interweaving different mediums and asking big questions of its audiences. 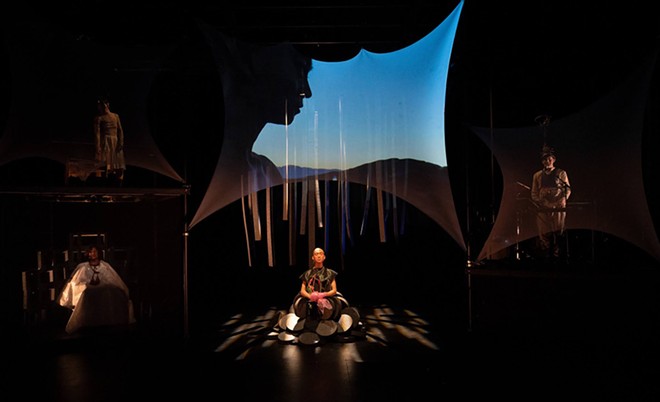 After a slimmed-down offering in 2021 and a canceled iteration in 2020, the performance art festival This Time Tomorrow is returning to venues across Cincinnati April 6-10.

A project of the Contemporary Arts Center, This Time Tomorrow (TTT) expands on the potential of broad-reaching performance art, commissioning a variety of artists, interweaving different mediums and asking big questions of its audiences. Events take place daily at locations including the CAC, The Carnegie, the 21c Museum Hotel and The Mercantile Library, with a nightly “Late Night Hub” at the CAC serving as a sort of afterparty location and the “Goetta-Institut” offering lunchtime conversations with artists at the Art Academy of Cincinnati. Tickets are available online for individual performances and start at $5; COVID requirements can vary for each event or venue and are listed on the CAC website. 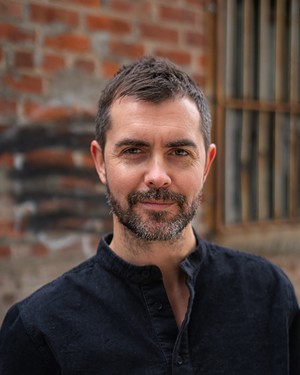 “I think any contemporary arts center that’s worth a damn needs to not just be a place for vetted brilliance, but also a breeding ground for cultural thought,” Drew Klein, the TTT curator who first made performance art synonymous with the CAC with the inaugural Black Box Series in 2011, tells CityBeat. “We want to be a laboratory for artists to come through to collaborate with us to develop new projects that speak to the times, the themes that are relevant within our community but also around the world.”

The artists span that geography, too, with local, regional, national and international representation. Britni Bicknaver, a seventh-generation Cincinnatian, is trained in sculpture. Her piece “Special Collections: Reflections on the Mercantile Library,” however, is a new work centered on sound art, commissioned by the CAC and the Mercantile and presented at the latter.

“How we translate history, the idiosyncrasy of places, the synchronicities of this world, are all topics that I’m interested in and that, really, the Mercantile piece is about,” Bicknaver says.

Originally on the roster for the unrealized 2020 TTT, Bicknaver found the extra two years’ worth of time a boon for further research and rumination. John Milton’s epic Paradise Lost proved to be especially inspirational, she says.

“I realized the correlation between me being obsessed with this text and what I was experiencing, as a person in a pandemic, literally getting pushed out of a co-created world, a paradise, our 21st-century Eden,” she says. “The other side of this, and the other thesis I explore in the piece, is really about the idea of our world especially not being a paradise for many excluded groups of people within our world.”

Formatted as a 30-minute audiobook narrated by Bicknaver — who also references herself as the artist and creator of the piece — “Special Collections” features 13 chapters, with different voice actors ranging in age from 9 to 70 appearing in each chapter. As the work progresses, the audience moves through the Mercantile Library, itself woven into the fabric of the sound art piece. References to the original indigenous residents of the region, Galileo, space, books in the Mercantile’s collection and the Apollo 8 mission are sprinkled throughout, and Bicknaver hired local singer-songwriter Brianna Kelly to create a musical accompaniment.

“What I want people to take away is an understanding of how connected everything is,” she says. “Being a Cincinnatian, I love this city, and I’ve made a lot of artwork about this city, too. I think an appreciation for the history of this city that gets lost, and also, this piece is a love letter to the Mercantile.”

New York-based artists Steffani Jemison and Justin Hicks perform collaborative musical works under the banner Mikrokosmos. Their offering at TTT also deals with the auditory experience: “One Giant Step,” presented at the CAC, builds off the melody found in Nina Simone’s 1969 Morehouse College performance of “To Be Young, Gifted and Black.”

In video of Simone’s historic performance, she deftly plays the piano, pleasure evident in her body language and that of the band. When the camera pans over the huge audience later in the video, they are jubilant and celebratory. Simone tells the audience about the black orchid corsage on her wrist, which she preserved and brought with her to Atlanta from the previous night’s show in New Jersey.

The orchid became for Jemison and Hicks a symbol that grew into the ethos of their work.

Simone’s friendship with author Lorraine Hansberry plus Hansberry’s own respective work also proved integral for Mikrokosmos. In particular, they looked to Hansberry’s speculative play What Use Are Flowers? (unpublished in her lifetime), which grapples with the concepts of beauty and value.

“While our research is extensive, the framework of the performance is very straightforward,” Jemison says. “It doesn’t require reading or preparation to enter. The way our live work unfolds is really staging an experience of learning and growing together that unfolds among the players.”

The CAC describes the experience of “One Giant Step” as performers moving through “a series of conversations, tutorials, exercises, and musical tasks that lead them, dramatically, to a place of knowing and understanding in real time.” 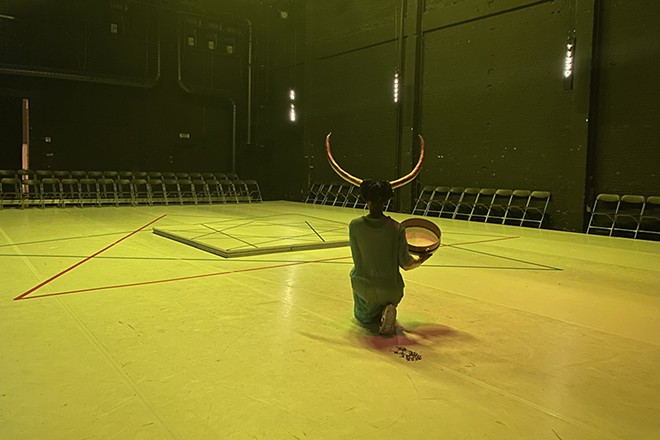 Belgium-based choreographer Radouan Mriziga, whose commissioned work “Akal” premieres at TTT at the CAC, also takes a non-prescriptive approach. “Akal” is the final work in a trilogy, though it can be experienced independently. Mriziga here focuses on exploring female goddesses in Imazighen culture — the indigenous people of North Africa — and how their mythology and lineage transcends geography and perspective, moving from deities like Neith and Athena and locales like Libya and the Western world.

“I’m not trying to write a new history,” Mriziga says. “It’s more how we can experience history together through choreography. It allows us to experience history more than just reading it or deciding what the narrative should be.”

Rwandan dancer, singer and choreographer Dorothée Munyaneza brings the non-linear performance narrative to life with song, Rap and dance. The multisensory depth of the work is Mriziga’s hallmark.

“I start from the body and then it can expand from the body to an imaginary space, passing through that into the real space, passing through the text and the words,” Mriziga says. “I always try to find a way to also make the audience experience the same. I believe we are mediums of certain knowledge, and for me, it’s always beautiful when art can be also a source of knowledge.”

Other performances slated for TTT include regional and world premieres, as well as additional CAC commissions. The North American premiere of “aCORdo” by Brazilian choreographer Alice Ripoll and dance company Cia REC explores race, prejudice, politics and policing through movement. “100 Keyboards” from Japanese artist ASUNA uses keyboards, arranged in circles around the performer, to “create waves of overlapping notes,” says the CAC. “As each electronic note joins the others, the effect is choral — unceasing voices in a fluid mass of beautiful noise.”

Kentucky artist Jay Bolotin presents the world premiere of “The Darktown Sermons,” a CAC commission that blends animation, original song and performance. According to a description, in Bolotin’s animation, which features hand-carved woodblock characters, “A somewhat confused Preacher (voice of Will Oldham, aka Bonnie Prince Billy) descends a ladder from heaven where he visited the angels. They were not what he expected.”

And Columbus, Ohio-based pianist and singer Sharon Udoh will present the premiere of “Black Gold: A Lullaby,” another TTT work inspired by Nina Simone. Udoh examines the impact of Simone and her music, as well as the death of Breonna Taylor, to ask “How do Black women thrive, push, grow, and trust? And how do we rest?” says the CAC.

“We love that there's this sense of discovery in this festival, not just for the audiences but for the artists as well,” curator Klein says. “Artists and audiences are sparring partners in a way and require each other in order to better understand the work.”