Drenched in blood, this classic horror film is not for the faint of heart. 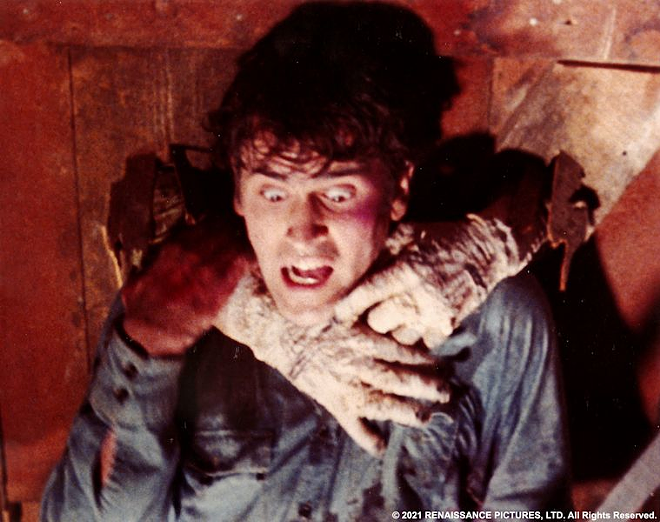 Photo: Provided by Fathom Events
"The Evil Dead" returns to theaters for its 40th anniversary this month.

With Halloween a month away, it’s officially horror movie season and fans of splatter cinema are in for a treat: The Evil Dead will play in area theaters for a one-time showing to celebrate the film’s 40th anniversary, bringing the beloved-but-controversial film to the big screen once again.

The Evil Dead follows a group of young friends out for a night of woodland drinking and debauchery in an abandoned creaky, old cabin. As they snoop through the vacant owner’s personal effects, the group inadvertently summons evil inter-dimensional spirits when a cassette tape recording plays out incantations read from the Book of the Dead (the film’s original working title). Forced to fight for their souls, minds and lives, the group succumbs to the relentlessly malicious demonic presence that takes possession of the terrified friends one by one until Ash, famously portrayed by Bruce Campbell, is the last man standing, soaked in blood.

The Evil Dead’s sequels are noted for their combination of hyper-exaggerated violence and absurdist slapstick humor, but the latter of those elements is not as prevalent in the original. With shocking special effects that still roil stomachs today, the film is a testament to the driving creativity needed for effective independent filmmaking, but The Evil Dead isn’t anywhere near as goofy as Evil Dead II, Army of Darkness, or Ash vs. Evil Dead.

More emphasis is placed on horror, violence and madness in The Evil Dead. The special effects, captivating as they might be, were obviously made on a budget (sure to be made even more apparent on the big screen), which is part of what makes the original film so effective, suggests Professor Bryce Bullins. Bullins teaches courses on horror media for the University of Cincinnati’s English department.

“There’s something so raw and visceral about Evil Dead that the other two films don’t capture,” says Bullins. “I’m not sure if that has to do with how much larger of a budget the sequels have compared to the original, or the independent spirit of it, but there’s something about it that continually surprises and fascinates me every time I watch it. This was a passion project from Sam Raimi and Bruce Campbell who had already been making Super 8 films together for years. Evil Dead was their attempt at a ‘serious’ film and was crewed with almost nothing but friends and family members.”

Bullins doesn’t mean to infer that other films of the time lacked passion, but that the production behind The Evil Dead is almost as legendary as the film itself. Inclement weather, rampant sickness and hazards on the set among a bevy of filming difficulties led to a near mutiny of the cast and crew, but yet years later fans still appreciate the hard work that went into making The Evil Dead.

“Despite all that, we’re still left with a film that is remarkably well made, entertaining and innovative,” Bullins says. “Films like that don’t get made as often anymore and I think that explains some of the enduring appeal of the film. There’s also the fact that the film exudes this palpable grittiness that its contemporaries seem to lack. Tom Sullivan’s special effects in particular still look disgusting and incredible 40 years later. It’s amazing what corn syrup, food coloring and coffee grounds can accomplish.”

If you’re into a campy, gore-drenched cinematic experience, catch The Evil Dead in theaters Oct. 7. For ticket info, visit fathomevents.com.