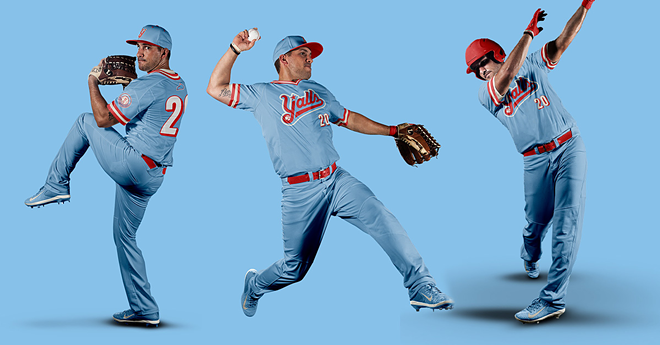 The recently rebranded Northern Kentucky Frontier League baseball team the Florence Y'alls has introduced a new look to go with their new name.

Previously known as the Florence Freedom, the team and city officials held a press conference in January to announce the name change.

The team was purchased by an ownership group led by David DelBello last year, after which it was announced that a name and branding change was forthcoming. The team solicited fans for ideas and late last year they whittled the possible new name choices down to a Top 5.

The suggestions for a new name were the Florence Go-Goettas, Florence Fossil Jockeys,  Florence No Sox,  Florence Pop Flies and, the winner, the Florence Y'alls. The Y'alls name was voted on by fans and approved by Florence City Council.

And the team just got a new uniform, designed by Covington creative firm BLDG.

The uniform is blue, red and white with red and white piping to pay homage "to the world capital of Y'all and our favorite Florence landmark: the water tower," says the team.

They also have a patch on their left sleeve that says: "“United we Ball, Forever with Y’all.”

And while there are currently no baseball games scheduled (because of COVID), you can still buy some Y'all swag at yalls-ballpark.myshopify.com.

Or head to the newly opened Y'alls Kentucky Grill for some ballpark-themed food with a "ballpark backdrop." The grill offers some socially distant concessions on Thursday, Friday and Saturday nights with a menu of sliders, soft pretzels, all-beef franks, cheese cups and boozy adult slushies.