REVIEW: The Iconic Photographs of Ansel Adams at the Taft Museum and Yousuf Karsh at the Dayton Art Institute

Two of the most influential and instantly recognizable — but very different — photographs ever taken in North America were done in the final months of the same year: 1941. As fate would have it, you can study excellent prints of both at two separate, simultaneous exhibitions at local museums through Sept. 16.

Both are black-and-white. One, “Moonrise, Hernandez, New Mexico” by Ansel Adams, essentially is a spookily atmospheric landscape in a remote New Mexico location. Seeing it close-up now, as a pristine gelatin silver print in an exhibit at the Taft Museum of Art, you feel its darkening sky is about to reveal big secrets.

The other influential photograph, a gelatin silver print by the portraitist Yousuf Karsh on display at the Dayton Art Institute, couldn’t be less eerily atmospheric. A stiffly dressed Winston Churchill, the British prime minister then under the pressure of World War II, glowers into the camera, looking willfully strong. Your eyes and Churchill’s are together “locked in tight,” to quote Bob Dylan, and there’s no peaceful, quiet way out. You are facing, to use a word often used to describe Churchill in this definitive photograph, a “bulldog.” 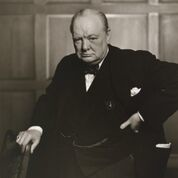 The Adams exhibit of 52 photos is a satisfying mid-size survey of his career as a sensitive chronicler of the American wilderness, primarily the West. When he was 14, in the mid-1910s, his family took a trip to Yosemite National Park in California and his dad gave him a Kodak Box Brownie camera. The future was decided. He became one of America’s most recognizable photographers until his death in 1984.

This exhibit does an excellent job of delineating the difference between his early prints and his later ones. Later in life, he made new enlarged prints of older photographs, and heightened the tonal contrast for dramatic effect. Most of this show consists of the earlier “vintage” prints from the collection of Judith Hochberg and Michael Mattis, but the Taft has added some later ones from private collectors and the Cleveland Museum of Art.

“Moonrise” is probably Adams’ most famous image, ironic since it’s not taken in a national park. The view is of a small, isolated town in rural New Mexico that Adams came across while driving as night approached. I’ve done my share of night driving in rural New Mexico; you can really feel like you’re whistling in a giant graveyard.

In the photo, the moon is rising while clouds are low on the horizon and still contain some whiteness. A small church looks like a citadel; the crosses and tombstones in its cemetery still have some whiteness amid the dying of the light. This isn’t exclusively a landscape, but the small town seems as much a part of its terrain — of Western land — as Half Dome in Yosemite, another Adams subject in this show.

(As Wikipedia explains, there’s some confusion about when “Moonrise” was actually was taken — Adams said in a 1983 book that the date was Oct. 31, 1941, but an expert has since calculated it to be Nov. 1.)

The Taft has put both a vintage print actually made in the 1940s (from the Hochberg/Mattis collection) next to a later enlarged one, from a different collection, that Adams developed in the 1970s. The later one really captures your eye because the contrast is so much more intense — the sky has turned pitch black, the clouds seem to be whirling ruptures in the horizon, and some of the crosses are brighter. It’s definitely more dramatic, but the subtlety of the earlier print feels more organic. Still, it’s undeniable that photography and society have moved toward a larger-is-better appreciation of photographic images.

I would never call the Armenian-born Karsh, who immigrated to Canada in 1925 and lived until 2002, a “celebrity” photographer. The Dayton exhibit shows he photographed the best and the brightest (including some actors) of his time, but they had to earn his attention through meaningful accomplishment rather than mere publicity. And such subjects featured in this show of 48 black-and-white prints surely did achieve that — Albert Einstein, Andy Warhol, Jackie Robinson, Eleanor Roosevelt and Humphrey Bogart, for example.

But what’s key in making his work so memorable, as the exhibit explains, is that he didn’t just assume their accomplishment earned them the right to tell him how they would pose. He wasn’t deferential. And that’s why his Dec. 31, 1941 photograph of Churchill is so famous.

It was taken after the latter spoke to the Canadian Parliament in Ottawa. Japan had bombed Pearl Harbor on Dec. 7, so the U.S. had entered World War II. Canada, already in the war in Europe, had added Japan as an enemy. So Churchill was certainly doing Karsh a favor to stand still for a photographic portrait — he doubtlessly had something more important to do.

The story is that Churchill made Karsh wait until he lit his ever-present cigar. But Karsh, after setting up, removed the cigar because it got in his camera’s — our eye’s — way. That action caused the glint of anger we see in the photograph.

Seeing these shows makes you realize that what’s most important about photography isn’t the genre but rather the photographer’s instincts, and what each one is prepared to do to get their perfect shot.