The Infamy, Celebrity and Excess of OTR's Early-2000s Club Clau Revisited in Exhibit 'Return to the Velvet Ropes' Cincinnatians who remember Club Clau, an early-2000s nightlife hot spot that brought celebrities and socialites to Over-the-Rhine, can revisit that excitement through the FotoFocus exhibition Return to the Velvet Ropes at The Annex Gallery in Pendleton.

“It gave me the flash power I needed to quickly capture anything I witnessed,” an artist statement from VanSickle says. “I had access to every inch of the club. I enjoyed being voyeuristic. I knew that 20 years later the images would have cultural value. That time has come.”

Considering Y2K’s recent resurgence in fashion and pop culture, the exhibition is timely. In one photo, a disheveled Edward Furlong (who played John Connor in 1991’s Terminator 2: Judgment Day) flips off the camera, the bottom of his wide-legged jeans soaked. Several photos feature shots of packed dancefloors, bottles and glasses raised in the air. A 20-something, flannel-wearing Justin Timberlake dances through the club in another image.

As the COVID-19 pandemic rages on, the photos spark nostalgia for a starkly different time, despite being shot only two decades ago. This speaks to the exhibition’s tagline, “Before social media; before social distancing.”

Clau, an acronym meaning “Change Lies Ahead of Us,” was coined by club co-owner Scott Sheridan. And change certainly came.

When Club Clau opened in 2003, Over-the-Rhine had not yet undergone the extensive redevelopment it would see in the decade to come. The civil unrest of 2001, provoked by the Cincinnati Police killing of unarmed Black resident Timothy Thomas, still defined public perception of the neighborhood. 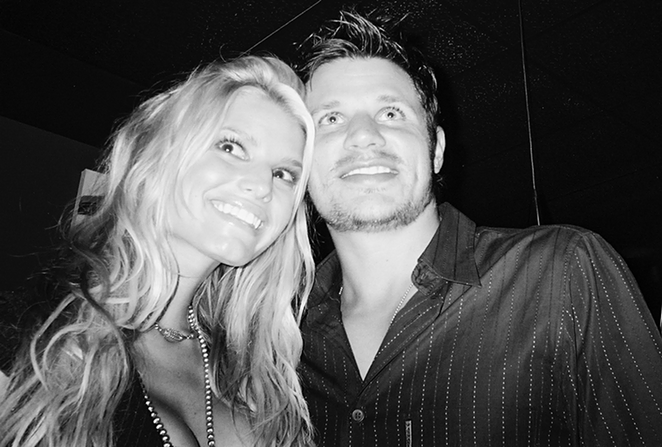 The Hip and the Hype, a 2008 documentary about Club Clau, states that the founders bought the club for a third of what it would have gone for today. Open just eight hours per week on Fridays and Saturdays, Clau’s weekends were high impact.

Club Clau also was one of the first venues to hire an art director to curate original artwork throughout the space, much of which was purchased by partygoers and celebrities alike. VanSickle, who once lived with Andy Warhol’s family in Pennsylvania as well as at outsider artist Howard Finster’s Paradise Garden, connected with Sheridan and club manager Josh Heuser by attending their parties. When the pair saw his art collection and his own Pop Art creations, they invited him to become art director for a club he had not yet seen.

One of Clau’s most recognizable artists was Cincinnati’s own Paul Lewis, who did portraits of the era’s biggest Rap stars, from Mary J. Blige to Jay-Z.

“(Lewis) was selling paintings outside Short Vine in front of the Perkins diner for, like, 25 bucks,” VanSickle says. “I remember seeing him selling them on Saturday morning. I went to Perkins, had pancakes and watched him just hawk his stuff. I went out there and said, ‘You and I need to talk. I think I’m going to make you famous.’”

Lewis’ paintings would go on to hang at Club Clau in front of 12 champagne tables.

Three of Lewis’ works — which feature Biggie Smalls, 50 Cent and Aaliyah — are displayed at The Annex Gallery, alongside a Warholian collage by VanSickle. A mesh of graffiti, the Superman logo, photos from Clau and pop culture juggernauts like Paris Hilton all make it a dreamscape of low-brow iconography.

Return to the Velvet Ropes serves as a conglomeration of Clau’s ideology, a coming together of people, place and booze. In The Hip and the Hype, Sheridan says he approaches all of his projects collaboratively. Everything was meant to add to the club’s overall allure, from its core members to the art to the tabloid fodder — including celebrity guests like adult film star Jenna Jameson — to the crowd, who VanSickle says happened to be crazily, sexually or scantily dressed.

“​​The first two weeks (of Clau) were extremely, surprisingly, kind of slow,” says VanSickle, adding that they hadn’t yet found club kids — young promoters from various colleges across the Tri-State. “By week three, it started to take off. And then it really started to take off.”

“It was about 12 weeks later that The Cincinnati Enquirer put the girls in the pink wigs on the newspaper’s top fold, writing, ‘CLUB CLAU TAKES HOLD OF CITY,’” he adds. “And then it started to rage; the money started coming in.”

By 2004, Condé Nast Traveler named Club Clau among the top 30 new bar scenes around the world.

“It was New York, L.A., Mexico City, Barbados, London and this unknown slab of concrete in a place called Over-the-Rhine all of a sudden, out of nowhere, is rewarded,” VanSickle says. Condé Nast Traveler said Club Clau was unusual for the Midwest in its pretensions, mentioning the lack of signage, sparse hours, attractive crowd and models who posed within mirrored boxes.

An absurdist streak ran through the heart of Clau, which is obvious in the exhibit’s displayed photos. They’re rife with costumed clubbers, including Adam Buchanan, one of Clau’s most recognizable patrons, dressed as Mopey Dopey the Dog, Clau’s unofficial mascot. Another features Steve-O of Jackass fame smiling wildly next to club co-owner Sheridan, who is dressed like an astronaut.

One of the handful of color photos in the exhibit captures about a dozen people in a club party bus with special guests from New York City’s club scene, James St. James and Cluck Cluck the Chicken.

There also were silly but enforced rules such as robots drink for free. If anyone showed up at Club Clau dressed as a robot, reps would yank them from the infamously long line and grant them immediate entry.

“When you have a few rules that make no sense but you enforce them, that made Club Clau a lot of fun for people, I think,” says VanSickle. “Where, now, in Cincinnati can we go — and I’m sure it’ll happen again — to have fun this way?” 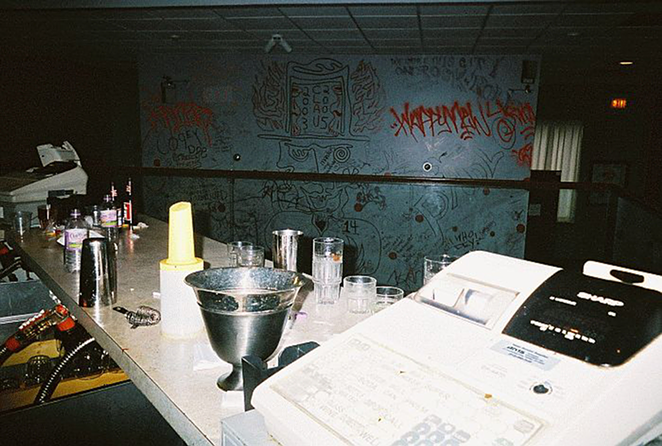 VanSickle adds that a lot of cool young people were able to spread their wings at Club Clau, including the founders and staff. In line with the slogan “Change Lies Ahead of Us,” the club closed its doors on New Year’s Day in 2005, after only 18-months. It wasn’t for lack of business, though.

“We here at Clau, we wanna go out on top,” Sheridan quipped in the The Hip and the Hype. “It’s been a long run, it’s been fun, but basically we want to end it while it’s at its top. We came in with a bang, we’re going to go out with a bang.”

Sheridan would go on to partner with fellow Cincinnatian Andrew Listermann’s Riveting Entertainment in Los Angeles. Heuser founded AGAR — the masterminds behind light/art festival BLINK Cincinnati — and is owner of OTR’s Ghost Baby and The Transept. Promoter Joey McFarland became a film producer with McFarland Entertainment, which backed Academy Award-nominated film The Wolf of Wall Street.

As for VanSickle, he has spent the past six years developing the statue of hometown boxing champion Ezzard Charles in Laurel Park, which is set to debut in spring 2022.

The success of Club Clau and what came after all goes back to the collaborative spirit found in Jean-Michel Basquiat and Warhol, says VanSickle. “That’s truly what this is, the collaboration of bringing people together.”

Return to the Velvet Ropes runs through Oct. 30 at The Annex Gallery, 310 Pendleton St., Pendleton. For more information, visit annexgallery.org.