The franchise's latest installment delightfully is not just more of the same. 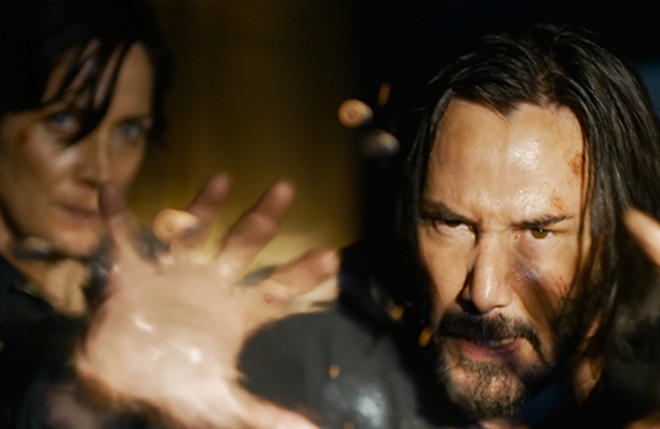 Changing the culture is a thing few can claim to do, but Lana Wachowski — along with her sister, Lilly — have undeniably managed. Having altered film, fiction and innumerable people’s conceptions of themselves and their own power amid a heavily controlled and aggressively mediated world, few works can claim a like aesthetic or cultural impact radius to the Wachowski sisters’ original Matrix trilogy.

The Matrix Resurrections proves deeply aware of this, reviving the franchise less to jump-start an old car than to propose a new model in active, questioning dialogue with its predecessors. Less invested in continuing the dystopian adventures and stylings of the first trilogy than in addressing the position of making it, the series’ newest feels both deeply personal and emotionally laid bare, showing forthright signs of struggle as it works to invent a path forward.

Honing in on a familiar, weatherbeaten programmer and game designer in Thomas Anderson (Keanu Reeves) who is himself responsible for producing a series of popular games called The Matrix, Resurrections recasts the green-tinged, noirish simulacrum of the first films as a sun-dappled world populated with clear skies and brimming espresso cups. Looking out over a gleaming, overdeveloped San Francisco skyline from his glassed-in office, Anderson’s business partner, Smith (a richly smug Jonathan Groff), muses teasingly of the view: “It’s so perfect, it’s gotta be fake.”

Here, dystopia often takes such gleaming, sly, and seductive forms — less imperious, muscular, or brooding than the world and foes we knew previously in the series. Decades have passed and much has changed. The world of the matrix itself, the stealthy web of coded systems we’re all suggested to inhabit, is no exception, pitched tellingly now as closer to our own — with a different strain of gossamer-lit splendor the new face of the series’ omnipresent menace.

This makes repression and alienation from one’s own self for each character first more tempting and then more deeply rooted for its labyrinth of comforts on offer as accompaniment. The new Matrix presents systems of power as weaponizers of coercive, comforting seductions rather than openly brute and forceful slavers — though police do here come by the story’s end to play a central role.

This makes Anderson — really Neo — all the more disoriented in this garden of downtown capitalist delights for feeling so deeply ill-at-ease.

Like Wachowski, he’s a prominent and influential artist asked to carry on work built on old successes — but the prospect proves disorienting, prompting a dissociative series of flashbacks and lonely, haunted moments that stand out as Resurrections’ most immediate, and artistically vital parts. In channeling the experience of her dazzling life — one spent in positions and experiences that have swung from privileged to the outrageous and bewildering — Wachowski gives a tremendously funny, richly refracted look at the experience of her own creative work. In showing the teeming boardrooms and planning meetings behind the film’s own Matrix sequel, she (along with co-writers David Mitchell and Aleksandar Hemon) offers up a blistering, credible satire of the Bloomberg-styled white-collar corral its self-alienated characters’ inhabit.

Key among these sleepwalkers is Tiffany (Carrie-Anne Moss), really Trinity of the prior films: pressed now into the role of a married soccer mom who spends some cherished personal time toiling away at her Ducati. When Neo meets and gently flirts with her at a ludicrously posh café, their halting, chaste courtship bears all the weight of old chemistry and deep yearning, either despite or because of their decades-long separation. With Reeves carrying his portions of the film by gliding easily between anger, grievance, angst, and peace, Moss delivers a signature blend of eager kinship and wry resolve in reply; together, these speak much louder than their lines on the page ever could alone. Neo’s task for much of the film is to reach Trinity and awaken her — after struggling to come into a renewed awareness of himself.

But they’re joined, too, by a host of fans and newcomers — including a sadly recast Morpheus (Yahya Abdul-Matteen II), an oozing therapist (Neil Patrick Harris, often overacting), and a welcome original character named Bugs (Jessica Henwick). As an awakened (and red-pilled in the old sense) rebel fighter, she’s joined by a crew of fans of the returning cast’s old exploits in fighting for humanity’s freedom — something she can only seem to grant them if they actually want it. With her band of Neo fans, the film’s relentless metatextuality is underlined in ways that both echo the cleverness of Resurrections’ opening and feel de rigueur in many franchises now — and so less easy to embrace than many of the film’s other parts. Bugs and company are Neo’s best allies in reaching Trinity in any case, struggling against the strange reality that the pair have been kept adjacent for decades but denied a proper reunion and a chance to fully connect; such a moment would depend on them becoming (once more) their fully conscious selves.

Paul Schrader, the writer and director, has discussed metaphor in terms not dissimilar to Neo and Trinity’s slight separation, with even slight distance making for “the difference between self-therapy and art.” Comparing the problems art addresses and the metaphors employed to charged wires, he suggests that while you can bring the two close, they should “come together but never touch”; this process, he says, is what’s necessary to generate meaning or connection in the form of a “jump” or “spark.” With too much overlap or too much distance, there is, he says, no spark — but when it works? “You’re alive.”

In structuring her film around the topic of its own existence while dealing so heavily in the substance of the prior films, Wachowski addresses this fraught and delicate artistic work head-on. In working to make something generative not just with the materials of the old films but of her own experience, she often succeeds at creating a distinct, quite different sort of life or spark than her past work offered up itself. While some sequences feel quite rote here — such as the more expository sequences based in Io, the film’s settlement of awakened humans (also a problem in the Zion of the old films) — Resurrections by and large feels lively in its willingness to remix and upend precedents in substance and in style. The energy of Resurrections is in some ways subtler than in the prior trilogy, treating enemies and mental sets as less obvious or easily broken than before. In other ways — and as in most of the Wachowski sisters’ work — it can feel quite obvious, expressing the “problem” in Schrader’s terms so directly that it can risk losing some of the spark that enlivens most great art.

Shifting style feels quite high-stakes here, but there’s a sense in watching that Wachowski not only wouldn’t but couldn't continue working in the same vein as decades prior. Her work here feels more humorous, more pop-inflected, and more verbally transgressive — but as baldly romantic as ever. Yuen Woo-ping’s graceful action choreography is absent here, replaced by the less baroque and more tactical work of now-prominent director Chad Stahelski, also Reeves’ longtime stunt double from the original films. Joseph Jett Sally, an alum of Sense8 joined by many others, cuts most sequences together in quick flurries, making even the most striking shots feel restless in their effect in a way that at different turns can vivify or drain proceedings.

But these comparisons, while germane, are things the film’s ahead of us on; asking why this film doesn’t look or feel more like the others would be the wrong question, and a way of plainly missing the point. While certain things endure and some changes might be welcome, Wachowski’s not interested in offering up more of the same — and understandably, for the world and the people in it are not the same as they were 20 years past. In a climate in which releases at this budgetary scale feel largely factory-farmed, and in which viewers themselves are lulled by a long buffet of familiar comforts akin to those Wachowski treats on-screen, toiling away in an old, over-imitated and accomplished vein could hardly seem duller. After seeing the florid work she’s turned in here, I’m grateful she doesn’t want to.