‘The New Colossus’ Reinterprets Our Freedom 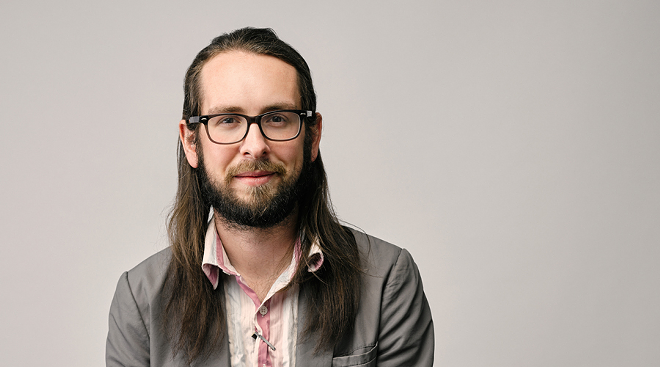 Chase Public unveils The New Colossus, a riff on the nonprofit Northside literary arts center’s popular Response Project series, Tuesday at the Mercantile Library and Sept. 7 at Chase Public’s headquarters. It is named for the famous Emma Lazarus 1883 sonnet that is inscribed on the base of the Statue of Liberty, with its unforgettable lines like “your huddled masses yearning to breathe free.”

This two-night event will feature 14 artists, writers, performers and others offering a newly created work that interprets — rather than responds to — a single line from Lazarus’ poem. Scott Holzman, Chase Public’s executive director, calls the event an experimental, “performative” reading. The New Colossus project is presented in partnership with the Mercantile Library and the Contemporary Arts Center and was initially inspired by an upcoming performance in the CAC’s Black Box performance series called By Heart. The latter, occurring Sept. 28 and 29, will feature the Portuguese playwright and actor Tiago Rodrigues leading 10 audience members in memorizing a poem.

Chase Public — which just officially became a nonprofit this month — has found keen interest in its Response Project series, in which performers appear before an audience to interpret different creative works, such as a Frida Kahlo painting, Prince’s song “When Doves Cry,” Georges Méliès’ 1902 short film A Trip to the Moon and the national anthem.

“This is definitely in the same vein,” Holzman says. “The big difference here is I’m not asking people to respond; I’m asking them to interpret. There’s a really different mental approach to something when you’re asked, ‘Take this thing, understand it and then respond to it’ versus, ‘Take this piece and then kind of recreate it in your own form.’”

A poet featured in a few Response Projects, and who was most recently an artist-in-residence with the Price Hill Creative Community Festival, Daniel is also on the board of Chase Public. She’s been tasked with interpreting the line, “Is the imprisoned lightning, and her name.” She requested it after Holzman approached her to participate.

“I chose it because it’s a representation of womanhood,” Daniel says. “And then there’s the idea of lightning and imprisoned lightning — I just really liked that phrase and wanted to play around with it.”

As for the second part of her line — “and her name” — Daniel compares it with the recent national social-justice advocacy effort that involved using the phrase, “Say her name” (or his) regarding victims of police violence.

The Lazarus poem has become closely connected with the notion, ingrained in the American spirit, that this country is a safe haven for refugees and immigrants. She wrote it as part of a fundraiser to build the base for the Statue of Liberty, itself a goodwill gift from France. It was later inscribed on a plaque mounted to the base, and its presence helped the statue become a symbol of freedom. Holzman says it completely changed the meaning of one of the United States’ most significant monuments.

“This sonnet has become a thing,” says John Faherty, the Mercantile’s executive director. “Immigration is top of mind and with it identity, and who’s an American is relevant and important. I’m just so excited we’re a part of this.”

With its new nonprofit status, Chase Public can now fundraise and potentially expand its offerings to make itself more known. As it does so, watch for more projects like this.

“The feedback we’ve gotten is that a lot of people’s favorite Chase Public events are the Response Projects,” Holzman says. “So I think the more we can tease out and experiment with that form, the more fun we can have and the more meaningful experiences we can help facilitate.”