The Nonprofit Covington Street Hockey League Does More Than Play 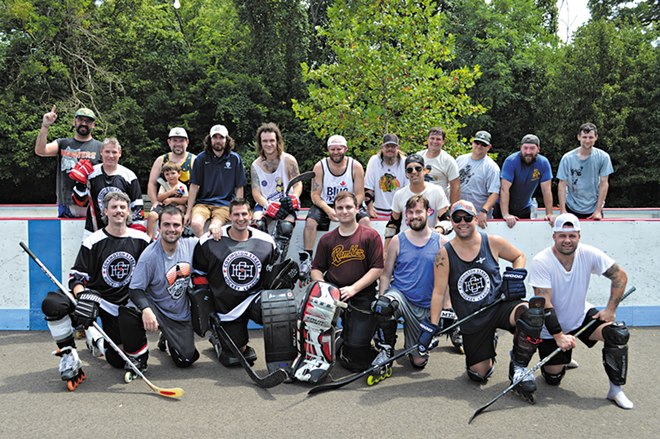 Last fall, the Covington Street Hockey League (CSHL) seized an opportunity that allowed its game and philanthropic initiatives to grow. All it took was a crew of 24 people, some serious muscle, various power tools and a fleet of personally-owned trailers and trucks. One trip to Dayton and two days of work later, the crew extracted plastic boards that once enclosed Dayton’s minor-league ice hockey rink.

Hara Arena was home to The Dayton Demolition until a 2019 tornado rendered the arena unusable. Three days before demolition was scheduled, CSHL founder and commissioner Jesse Kleinhenz rallied members of the league to retrieve the boards — a $50,000 value, he says. The team then buckled down on a vision to make Covington’s Barb Cook Park its new home.

While the enclosure has its practical benefits, like not losing the ball every other play, the CSHL sees it as an opportunity to engage the community and support its latest Youth Program.

“The rink is across the street from Latonia Terrace projects,” Kleinhenz says. “It’s a huge opportunity to reach out to a lower-income area and give people a chance to play something. They could play hockey but they (also) could play soccer. There’s all kinds of activities you can do with an asphalted space.”

The CSHL struck a deal with the City of Covington: foot the $24,000 bill to asphalt the arena and the space was theirs. The rink opened in the spring, attracting community members and falling in line with Covington’s recent plans to redevelop area parks.

Street hockey, also called roller hockey, is played similarly to ice hockey but with a few differences. Most notably, there are no lines on a street hockey rink, which means no offsides or icing (an infraction regarding the lines on an ice rink). Also, ice hockey is played with a puck and street hockey with a ball, or “the great equalizer,” as Kleinhenz says. As a result, street hockey commands more strategy and possession skills.

Four years ago, the league didn’t have intentions beyond getting people together to play. In 2018, about seven players showed up for their first pick-up game, Kleinhenz says. It was a snowy Saturday in January at Kenney Shields Park in Covington (their original home), so the bunch sidelined their skates, cleared some snow and played a game on foot. Aside from pandemic-related reasons, the league hasn’t skipped many Saturdays since.

“We’ve been so consistent,” Kleinhenz says. “It’s probably one of the biggest reasons street hockey here is still alive. Thursday and Saturday. If it’s December and there isn’t snow on the ground, we are out there playing, three to four hours.”

Now, as an official nonprofit organization, the grassroots league is ingrained in Covington’s quirky identity, adding to its laid-back, inclusive and altruistic culture.

“When we decided we could make Covington Street Hockey bigger than just playing hockey, we started cleaning parks and being the city’s muscle,” Kleinhenz says. “Just being a helping hand out there. We try to be as inclusive as we can, it’s free to play with us, and we generally have equipment to give away to people. It’s a giving and volunteering culture. We are constantly encouraging our crew to volunteer their time, and always wanting to reach our next fundraising goal.”

No one really asked them to do it, either. The group of 100-plus players — a conglomerate of all ages and skill levels — found common ground off the rink, where members participate in local park cleanups, engage youth by teaching hockey and providing equipment, host an annual holiday toy drive and hold quarterly tournaments and fundraising events.

Since the league’s inception, participants have raised more than $35,000 from merchandise sales, donations, booths at local festivals and tournaments, according to the CSHL website. Last year, $500 of those funds came in the form of a grant from the Cincinnati Cyclones, which the league used to buy children’s hockey sticks, says Kleinhenz.

The league is made up of six teams whose names represent the playful and witty attitude adopted by the league: Goebel Goats, The Shields, Mainstrasse Misfits, Roebling Trolls, Licking River Rats and Devou Devils. Local breweries MadTree, Braxton and Rhinegeist sponsor the teams with uniforms.

Covington bar Gypsy’s, where Kleinhenz is the general manager, is the league’s clubhouse. Members gather before and after games, hold proper drafts for the teams and fundraising events there when needed. The six teams only convene to compete competitively during quarterly tournament; otherwise, the group focuses on twice-weekly pick-up games. It’s a come-and-go, crack-a-Busch-Light type of environment where camaraderie rules and teams are chosen at random after participants toss their sticks into a pile.

“What’s really incredible is the variety of skill levels in the crew in and outside of hockey,” Kleinhenz says. “We have construction workers, social media experts, beer sales reps, teachers, engineers, digital designers — all of these people come together to create incredible merch and media content and a great area to live in.”

From the beginning, the “bubs,” as they call each other, have utilized individual talents of league members to fuel league operations, merchandise and media. From flags to uniforms and advertising to fundraising, the CSHL has its own leadership team that manages and oversees the enterprise.

The group produces unscripted pre- and post-game interviews, where players often satirize National Hockey League interviews. The videos are shared on social media, where the public can enjoy and also get to know the players.

“We go out there on Rollerblades and have a good time,” Kleinhenz says. “Right off the bat we started making really funny videos, just acting like we were professionals, like post-game interviews and stuff. I think that’s what really gained us some notoriety, just cause we were being goofballs.”

The team’s habitual content creation came as second nature and paid off in August, when they were selected by video submission to compete in the Barstool Sports Summer Hockeyfest in Detroit. As one of 48 teams chosen nationally, the CSHL brought seven players and 40-50 supporters to the tournament, Kleinhenz says.

“They were taking team submissions by video only,” he says. “They were looking for the most electric teams and people that were going to go up there and cause a bunch of buzz and have a good time. We definitely created a spectacle, right off the rip we were the only team to show up with a trailer.”

The players competed Aug. 6 and 7 and made it to the semi-finals, until they were knocked out by the team that took first place. The CSHL returned home with pride and ready to focus their efforts on reestablishing quarterly tournaments that were thrown off by COVID-19, as well as their Youth Program, community giveback and future plans to implement a more competitive league for the six teams.

On Saturday, Oct. 30, the CSHL will host its first tournament in over a year called “Night of the Living Send 2.” Costumes are mandatory and admission fees apply. Kleinhenz says the team usually puts together some form of live music, craft beer and food sales for entertainment.

“‘Send’ is a hockey thing for sure. It’s like ‘send it, go hard,’” Kleinhenz says, noting that it’s a phrase the league applies to wherever their focus lies, whether that’s continuing to cultivate a community that holds space for everyone and creates opportunities or simply playing the sport.

Learn more about the Covington Street Hockey League at covingtonstreethockeyleague.com.