Steven Spielberg's journalism movie, about the pressures The Washington Post faced publishing the Pentagon Papers, benefits from Hanks and Streep but it's no "Spotlight" 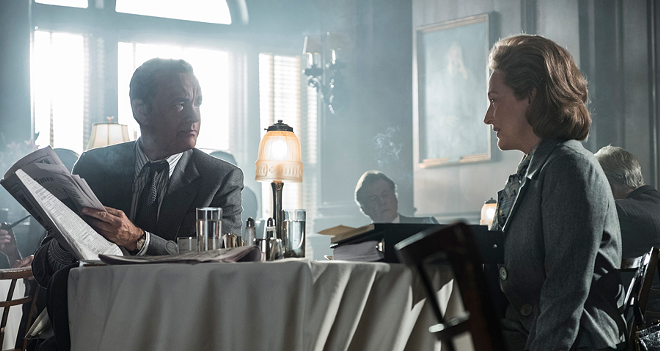 Steven Spielberg kicks off The Post, his telling of how The Washington Post defied the Nixon administration in 1971 by publishing the Pentagon Papers, with a late-1960s warfare sequence in Vietnam. While not nearly as harrowing as anything in his Saving Private Ryan, Spielberg captures the deadly frenzy of combat in the jungle and sets up an expectation for a hellish journey into the bureaucratic minefield on the home front.

From this battle scene, we’re supposed to understand and appreciate the fact that this was just another day in the war zone. But our real takeaway comes a few beats later, when we see Secretary of Defense Robert McNamara (Bruce Greenwood) getting a briefing on his plane about the high casualty count. He hears the cold hard truth of the matter: We’re bleeding troops and must be prepared to supply a temporary transfusion of more, who in turn will also bleed out of the gaping hole that is our Vietnam policy. And we’ll continue repeatedly doing that into the foreseeable future.

Spielberg and screenwriters Liz Hannah and Josh Singer nail that point home as McNamara gets off the plane and addresses the press, spinning the grim reality into a fairy tale for reporters to feed readers wanting to believe that America could not (and would not) ever lose an overseas battle.

The film then flashes forward to the early 1970s, with McNamara now the head of the World Bank and also a close friend of Kay Graham (Meryl Streep), the beleaguered publisher of The Washington Post. The Post wasn’t yet the major American paper it became just a few years later, despite its cushy position in the nation’s capital. Editor Ben Bradlee (Tom Hanks) was struggling just to get reporters into the Nixon White House to cover the wedding of the President’s daughter, to say nothing of getting meaningful political scoops.

But the publication of the Pentagon Papers changed that. This secret government document detailed the horrific and ongoing fallacies of America’s Vietnam policies through past presidential administrations. Actually, The New York Times started publishing it first, but President Richard Nixon got a federal injunction to stop it. The Post gets involved, as its namesake film shows it, because staffer Ben Bagdikian (Bob Odenkirk) tracks down a former associate with access to the documents. The paper eventually cracks the story open while directly defying Nixon.

It’s all a great political story. But the problem with The Post as a film is that it plays its main and side stories like clever party anecdotes rather than taut moments in our troubled history. Streep’s Graham fusses over whether or not she can convince financiers to back the paper’s public offering on the stock market, which is important but not as urgent to us as the drama over the immediate ramifications of publishing the Pentagon Papers. And while the movie has a fascinating parallel to the current situation with women in all industries uniting their voices against harassment and unequal treatment in the workplace, it comes across here as too much hemming and hawing.

The newsroom sequences, which should have crackled with thrilling debate and feverish intensity, come across as banter more broad than witty. It probably doesn’t help that Hanks, in these scenes, leads a cast (including David Cross, Odenkirk and Jesse Plemons) that seems better suited to a Saturday Night Live sketch of the events than an incisive media-driven takedown. A good, politically minded SNL sketch, granted, but we still need something more from the film.

The Post lacks the investigative edge and bite that 2015’s Academy Award-winning Spotlight gave us in every frame. It replaces that film’s propulsive search for the truth with rah-rah speechifying and heavy-handed parallels to our current political moment. There’s the sense that the narrative and its execution are doing little more than winking at us, signaling and signifying a desire to win us over with their own spirit rather than by making us see the high-pressure, gritty and dogged determination — and struggle — of the newspaper’s staff during this crisis.

Despite it all, Streep and Hanks soldier on, as only they can, and they do convince us that this fight matters. But The Post feels like old news. (Now playing) (PG-13) Grade: B-