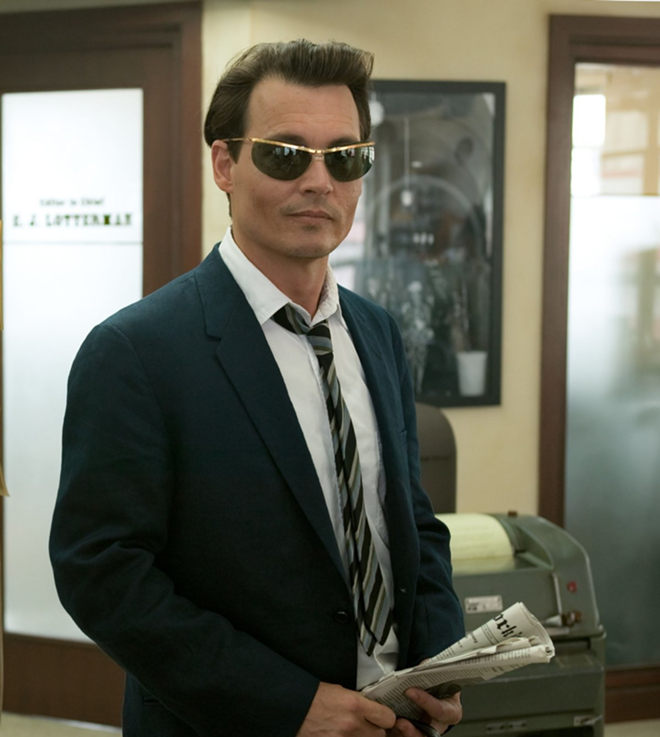 Johnny Depp in 'The Rum Diary'

Johnny Depp spent more than 15 years building exactly the kind of cinematic résumé that keeps actors from being movie stars, roles featuring weird hair and silly voices. Then he changed exactly nothing in his approach, and scored a few huge blockbusters. Now those same movies Depp was making 15 years ago, instead of opening in art houses, are opening on 2,000 screens.

Anyone who follows the movie industry at all eventually makes peace with the fact that “Hollywood logic” is a true oxymoron — and the wide release of The Rum Diary is only the latest evidence for the prosecution. In 1998, Depp starred in a demented adaptation of a Hunter S. Thompson work, Fear and Loathing in Las Vegas, which grossed just $10 million during its theatrical run. Since then, Depp has blown up into a Jack Sparrow/Willy Wonka/Mad Hatter mega-star — which, somehow, translates in the logic of Hollywood to a reason why his appearance in a slightly less demented adaptation of a Thompson work has a shot at scoring in Middle American multiplexes. As frisky and funky as The Rum Diary might be, it’s as far from a goofy mainstream romp as ... well, pretty much everything else Depp has ever done.

Loosely based on Thompson’s early years as a journalist circa 1960, The Rum Diary casts Depp once again as Thompson’s surrogate, this time a young writer named Paul Kemp. Flailing in his attempts at completing a novel, Kemp accepts a job at an English-language newspaper in San Juan, Puerto Rico, where the atmosphere is considerably less than quietly professional. The editor (Richard Jenkins) constantly bemoans his degenerate, alcoholic staff; the photographer, Bob Sala (Michael Rispoli), trains roosters for cock fights; and a reporter named Moberg (Giovanni Ribisi) seems perpetually drunk and/or insane. The only “normal” person Paul meets is an enterprising public-relations man named Sanderson (Aaron Eckhart), who thinks Paul has the persuasive writing skills to help Sanderson and his friends turn the island into a gold mine.

Paul’s moral awakening — as he comes to understand what Sanderson and his cronies have planned — becomes the narrative fulcrum of The Rum Diary, and that’s also where the film is at its clunkiest. Writer/director Bruce Robinson — the Withnail & I auteur who hasn’t made a film in almost 20 years — plays Paul’s encounter with a deeply impoverished pocket of San Juan with deadly seriousness and stops things more or less in their tracks to have the cabal of developers cackle over their capitalistic plans. The Rum Diary might be intended to mark the birth of a unique voice challenging “the bastards,” but Robinson doesn’t always seem to know how to integrate that righteous indignation into the story of a bunch of crazed expatriates.

Because when The Rum Diary is a purely episodic tale of those expatriates’ games, it’s got plenty of off-beat charm. Depp brings wide-eyed incredulity to his performance as a guy who had no idea what kind of twisted world he was getting himself into and generously allows his cast-mates to carry most of the madness. It’s a rare occasion when Depp isn’t playing the most whacked-out character in a movie, but Ribisi gets that honor here, growling his way through a performance that’s like Office Space’s Milton gone feverishly over the edge.

In fitting gonzo fashion, the film really finds its footing when Paul’s misadventures take on a hallucinogenic haze, like trying to escape angry locals by breathing moonshine-fueled fire on them, or a first experiment with acid in which Sala’s tongue appears to turn into a serpent. And it’s a unique sort of film where the hero’s first romantic encounter with the lovely object of his desire (Amber Heard) is interrupted by someone playing recordings of Hitler speeches.

In all its conspicuous perversity, liberal social conscience and fragmented sense of reality, The Rum Diary might actually be a more perfectly pitched screen translation of Thompson than Fear and Loathing. It’s messy, quirky, funny and angry, not always at the same time or in the ideal combination. And because it just happens to have a star whose other movies have made a lot of money, Hollywood is trying to sell it to people who almost certainly won’t want it. Grade: B