The Squirrels of the Ohio Statehouse Have Been Famous for 150 Years. Here's Why

Since its completion in 1861, the Ohio Statehouse's park-like grounds have been as popular with squirrels as they have been for generations of Capitol Square visitors. 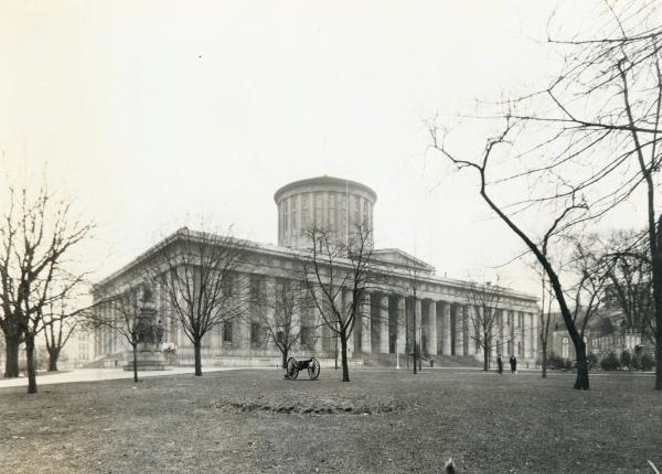 Photo: OhioPix.org
This photograph of the Ohio Statehouse in Columbus, Ohio, was taken in the winter of 1931.

When people thought of the Ohio Statehouse, a reporter wrote in the early 1960s, one defining image came to mind: Not the important policy debates inside or the many famous figures that have traversed its halls.

No, the reporter wrote. People thought of the squirrels.

Since its completion in 1861, the Ohio Statehouse grounds have been enjoyed as a park area as popular with squirrels as it has been for generations of Capitol Square visitors.

The little buggers have also been a popular subject for journalists, who for more than a century have reported various squirrel-related anecdotes as a means of offering some amusement to readers in between dispatches of the latest political fight. 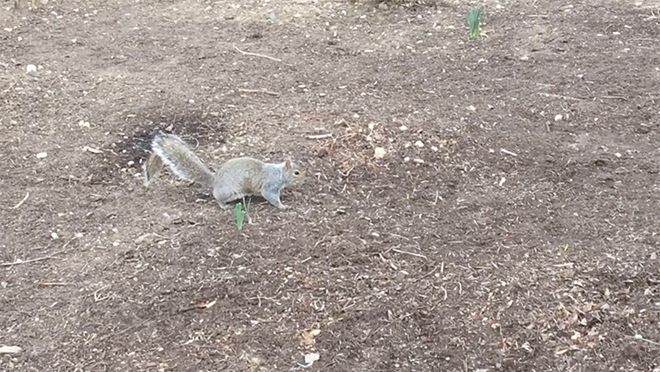 Photo: facebook.com/OhioStatehouseMuseum
A squirrel on the grounds of the Ohio Statehouse's Capitol Square

“A white squirrel has been placed in the State-house grounds,” a paper noted in 1884. “It is regarded as a very rare specimen.”

Five years later came a story about a gray squirrel mother carrying her children across the grounds to a new tree to get away from a nearby group of fox squirrels.

“These Are My Jewels,” a magnificent sculpture honoring Ohio figures such as Ulysses S. Grant and William Tecumseh Sherman, was created for the World’s Fair in Chicago in 1893. At the fair’s conclusion, it was brought back to Columbus with the hopes of placing it inside the Statehouse. But the sculpture was too large to fit through the doors, a newspaper reported at the time, so it remained outside to serve both as a monument and as a “playground of squirrels.”

Over time they gained quite a reputation. On a few occasions, people sent boxes of squirrels to the Statehouse so that the grounds would feature four-legged inhabitants from across the state.

In 1900, the squirrels helped make history when Gov. George Nash appointed the son of a friend to serve as “Superintendent of Squirrels.” Francis M. Marriott, at 6 years old, became the youngest person in Ohio history to be issued a political commission.

Marriott’s father, the manager of the state reformatory, offered to create a uniform for the child superintendent.

“I’m going to take the best care of the squirrels in the Statehouse yard,” the young boy told a reporter. “I know what to feed them and am going to just make everybody know that those little animals are cared for right.”

Marriott was an even better law student than he was a squirrel superintendent, earning the highest score in Ohio on the state bar examination in 1917. The young lawyer almost returned to working at the Statehouse in 1922 — this time as a state senator — but lost his election bid.

Gov. Martin Davey later appointed 10-year-old Alycemae Derighter, the daughter of a state representative from Cleveland, to a similar position in 1937. But the job had grown by then to include even more responsibilities: Lawmakers approved a resolution designating her as “Mistress of the Squirrels and Pigeons on the Statehouse Grounds.”

Through most of the 1900s, humans and squirrels happily co-existed on Capitol Square. In the early days, Statehouse employees ceded control of the outdoor drinking pump to the animals, which took full advantage. It became tradition to feed the squirrels an extra supply of high-quality peanuts during the Christmas holiday season.

The Marion Star newspaper made light of an alleged scandal in 1911 by writing: “If these legislative bribery charges are true, it is easy to understand how the statehouse squirrels haven’t had any easy pickings of late.”

The hungry critters sometimes tried to make their way inside. In 1916, a meeting at the governor’s first-floor office was interrupted when Lt. Gov. Jon Arnold noticed a squirrel in the open windowsill. Those gathered left the meeting in search of peanuts and spent quite a bit of time feeding it until realizing they should get back to work.

In 1918, a group of reporters noticed a squirrel inside the rotunda and made bets as to which direction it would go. It descended down the north steps and left its hickory nut in the Ohio War Council meeting room.

One particular friend of the squirrels was state Rep. George Barrick of the Coshocton area. He was known to pack a poke of peanuts in his coat, leading squirrels to jump up to his waist and eat ‘em straight out of his pocket.

But there were occasional squirrel critics, too. One was Public Works Director George B. Sowers, who viewed them as “mangy and lazy.”

Sowers also complained about factions of squabbling squirrels who lived on opposite sides of the Statehouse. Metaphors abound.

“The squirrels that live on the north side of the State House don’t get along with those on the south side,” Sowers said in a 1948 news story. “There hasn’t been much actual fighting, but there is a lot of bickering and chatter.”

“Some of them don’t even look like squirrels,” he continued, pitching an ambitious idea of replacing them all with better specimens. “I think if we can trade the worn out squirrels for some fresh ones in the country, it would improve the appearance of the statehouse lawn.” 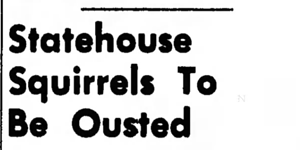 It doesn’t appear anyone bought into Sowers’ squirrel replacement theory, but members of the grounds crew did try their best to improve their living arrangements. The squirrels long made their home in wooden houses built by government employees, though some animals built their own dens when, so to speak, there were housing shortages.

Sowers earned a minor victory in 1949 when the state decided to quit buying peanuts to use as squirrel feed. The switch to corn saved Ohio taxpayers a total of $125 per year.

The Associated Press concluded its story on the peanut austerity measure by reporting, “P.S. — The squirrels made no comment.”

The 1960s weren’t kind to the squirrels, either. When John F. Kennedy campaigned at the Statehouse in October 1960, children reportedly chased the squirrels out of the trees to get a glimpse at the Democratic presidential candidate.

A more lasting eviction came in 1963 when construction began on an underground parking garage. A controversial aspect of the major excavation project involved chopping down trees across the grounds, thus destroying the squirrel houses.

Workers relocated the squirrels away to a number of nearby Columbus parks. It took several years after the project was finished for any squirrels to return, but they did eventually come back.

Dayna Jaklanen, the deputy director of museum and education at the Statehouse, recently highlighted the squirrel history in a historical video.

“We still even to this day have a pretty great population of squirrels who like to spend their time here on Capitol Square,” she said, pointing to a few running up and down the tree behind her.

This squirrely story was originally published by the Ohio Capital Journal and republished here with permission.