The Tenderloins Are Practically Famous

The comedy group behind the truTV reality series "Impractical Jokers" is a quartet that has been performing together since the 1990s. 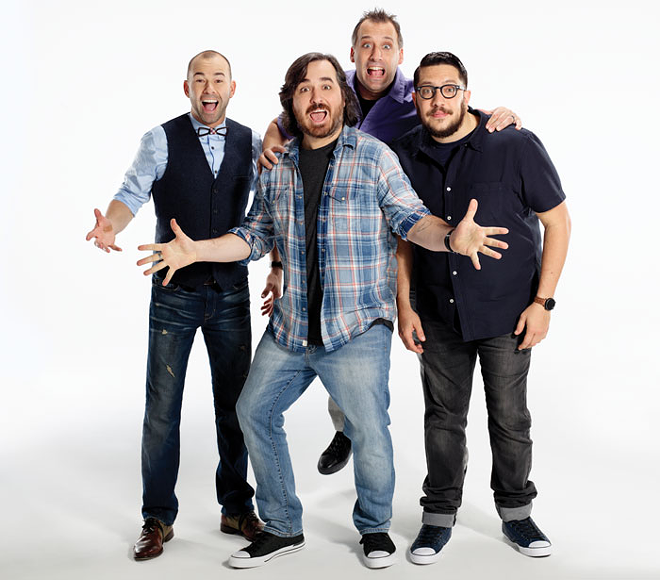 Their hit TV show is called Impractical Jokers, and that’s what many people call them. Behind the truTV reality series, however, is a comedy group called The Tenderloins, a quartet that has been performing together since the 1990s and will come through the Taft Theatre on Saturday.

“We are still The Tenderloins to this day,” explains one of the troupe’s members, Salvatore “Sal” Vulcano, by phone during a break from taping the show. “We met in high school, all in the same grade, and started doing improv and sketch together. That was almost 20 years ago at this point, and that’s our identity outside of Impractical Jokers.”

For lack of a better descriptor, Impractical Jokers is a prank show, but with a twist. Instead of playing pranks on unsuspecting innocents, the four Tenderloins (Joseph “Joe” Gatto, James “Murr” Murray, Brian “Q” Quinn and Vulcano) challenge each other to do silly and outrageous things.

Usually, one member is told what to do by the other three via a wireless microphone and headset. It often involves a challenge like getting a stranger to accept a raw fish in the middle of Central Park or bagging groceries and saying silly things to the customers.

“Upright Citizens Brigade was a huge influence on us,” Vulcano says. “And growing up we never missed Saturday Night Live. There was an improv class in our high school, and we all ended up taking it and loving it. Then we just started our own thing.”

The group concentrated on improv before introducing more written sketches into their act. “Then YouTube started getting big and we thought, ‘Why don’t we film these sketches and put them online?’ We did and they started to get some traction, and it just went from there.”

They soon had an agent and in 2007 were booked to compete on NBC’s It’s Your Show, where their skit “Time Thugs” helped them land the $100,000 grand prize. Development deals followed, and the troupe naturally tried coming up with sketch show ideas. However, that genre wasn’t in demand at that time.

“After our third pilot did not go to series, we said, ‘Let’s shake things up and make something that doesn’t rely so heavily on scripted pages of dialogue,’ and we found it,” Vulcano says.

“We came up with an idea where we could be ourselves and improvise and showcase how we are together,” he continues. “So we took our phones and filmed. We hid them in stores and wherever, and filmed each other doing these crazy things. We went to truTV and just showed them the tape we made on our cellphones. They agreed to buy it in the first meeting.”

Impractical Jokers debuted in December 2011 and is now finishing up its fifth season. “We have this shorthand,” Vulcano says. “We’ve been friends for over 25 years. People pick up on our relationship with each other. It’s a key element of the show.”

Though not a prank show in the traditional sense, it does appeal to those who like such programs. “We don’t really consider it a prank show because we’re not pranking other people — we’re throwing each other under the bus,” Vulcano explains.

“We do call it a prank show or a reality show, but we write the show as much as we improvise and I think it’s really a show about four friends, to tell you the truth. Everything else is kind of secondary.”

The live version of the show is designed with the fans in mind. “If you like the TV show, you’ll love the live show,” Vulcano says. “It’s a mix of storytelling, stand-up, videos and some things we shot just for this tour.”

There’s also some crowd work and other interactions with the audience. “It’s just a mixed bag of a whole bunch of stuff,” he says. “The experience you get live matches the experience you have watching the show because people come out and they feel like they know us.”

That familiarity, Vulcano adds, comes from the fact that they are playing themselves on TV. “There’s no filter. They feel like they know us, and that really comes through when people come to see us live.”