The Y’alls? The Go-Goettas? The No Sox? The Florence Freedom Baseball Team to Announce New Name Today

There will soon be no more Freedom in Florence, Kentucky.

The Frontier League Baseball team the Florence Freedom is changing its name. The team and city officials are holding a press conference this evening (Jan. 21) to announce the new name and mascot. Yep, that means the old Y'all water tower mascot, Y'all Star, is likely no more — though, as you'll see below, the water tower concept may not be off the table entirely.

The team — which plays in the Frontier League — was purchased by an ownership group led by David DelBello last year, after which it was announced that a name and branding change was forthcoming. The team solicited fans for ideas and late last year they whittled the possible new name choices down to a Top 5.

Here, from the Florence team's website, were the top suggestions for a new name. What's your pick? (And what could possibly be the mascot if the "Go-Goettas" is chosen?)

Florence is here to take back Goetta for its rightful Northern Kentucky owners. Choosing the name Go-Goettas celebrates this wonderfully weird piece of Northern Kentucky food culture, while giving the team an aspirational mindset to shoot for.

Rising from the marshy pits at Big Bone Lick are the Fossil Jockeys: a group of raucous prehistoric riders who choose the mightiest beasts as their modes of transportation.

We’re the first and last professional baseball team in the south (depending on which way you’re driving from), so we’ll take it upon ourselves to be the symbol for Southern culture. “Y’alls” as a name celebrates much more than a painted water tower, it celebrates who we are as Northern Kentuckians and Southerners, with “Go Y’alls” as our rally cry.

It’s no secret that we Northern Kentuckians love two things: pop and baseball. That's why we married those two concepts together as the Pop Fly, which is not only a common baseball term but a name for a fly who has an unquenchable sweet tooth.

A nod to famous baseball names but with a Kentucky twist, the No Sox celebrates our relaxed, kick-up-your-feet kind of culture. Baseball and life are a little different down here in Florence, and the name No Sox lets everyone know they’re in for a unique experience.

UPDATE: It's official — the Florence Freedom's new name is the Florence Y'alls, as voted on by fans and approved by Florence City Council. The team released promotional materials explaining the new name, team colors (red, white and light blue) and more. There's even more info (plus a full line of merch) at florenceyalls.com. 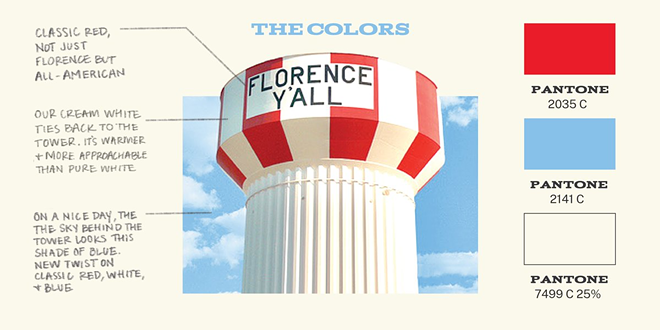