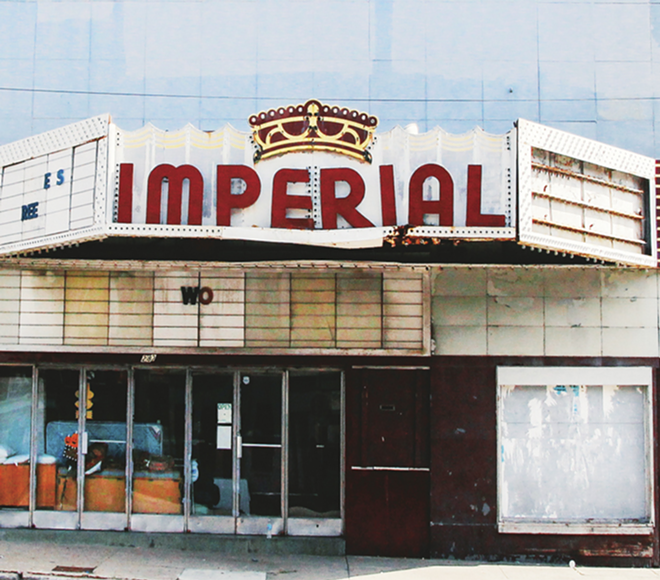 On a sweltering July morning, a cabal of volunteers ransack the interior of the Imperial Theatre Mohawk, a 102-year-old theater that’s been empty for decades, with the exception of an occasional church service and its stint as a store selling mattresses and furniture.

It’s one of those places you drive by as you leave Over-the-Rhine and head toward Clifton on Central Parkway and wonder what the hell happened to it — what was there, and what could potentially be there again? The exterior bulbed marquee still remains, announcing nothing in particular.

Julie Fay, a longtime OTR resident and owner of Iris BookCafé, Urban Eden and Another Part of the Forest, purchased the building last year. During the cleanup, a commercial Dumpster is set up in the alley next to the Imperial, and members of the community wearing surgical masks busily organize what appear to be old transformers and other junk.
Because the theater lacked TLC over the years, it doesn’t have central air conditioning, and the moisture from the water adds to the summer heat, which makes the cleanup somewhat uncomfortable. But the volunteers have no problem sticking it out and offering their services.

The biggest issue plaguing the theater is the roof: It’s leaking, and water has ravaged the ceiling and walls.

The first step toward renovating and repairing the theater, Fay says, is to stop the water from coming in, and then to remodel the corrugated metal roof, making it green and sustainable. Next comes the plumbing and electric. Fay doesn’t know much about engineering an old theater, which is why she’s enlisted many community members to help.

She also doesn’t know too much about the history of the Imperial, but what she does know is that it was built in 1913 as a vaudeville house, and it was an early adopter of concrete and steel fireproof building techniques — unlike early 1900s opera houses, which were built out of wood.

She thinks sometime in the 1930s the vaudeville aspect turned into a movie theater, and in the ’60s it became an X-rated theater. In fact, they found a strip of film that can only be described as “smut.” At another point in history, the theater hosted burlesque shows and was renamed the Imperial Follies.

Since the initial clean up, the space actually looks like the majestic theater it supposedly once was. About 600 seats with plywood backing and leather cushions line the balcony and orchestra sections. If you stand in the farthest section of the balcony, there isn’t a bad seat in the house. The balcony is commodious, so nothing blocks the audience’s sightlines. The projection booth lives in a cabinet behind the balcony and is still somewhat intact. The booth is set up so that if Fay wanted to, she could screen 16mm and 35mm celluloid films again.

The question Fay always gets is, “What are you going to do with the place?” She responds each time with, “I think we’ll make it into a theater. Seems like the best thing to do.” Fay is a lover of the arts, but she sees the big picture here.
“What I do see is this is the anchor for leveraging the development of this area, and that’s what I’m interested in,” she says. “And having artists to have a place to live, not to be displaced from. I think there are ownership opportunities here.”
She explains that the neighborhood is in the process of being designated as the Mohawk Place Historic District; the city and state passed it, and now they’re waiting for the federal level to give the final approval. The historical designation allots Fay historic tax credits and incentives.

“The biggest thing is not to lose this section of the neighborhood and to have a place close by that the kids who are being displaced from Main Street can go and still be close to the streetcar,” she says. “They don’t need cars. This is a nice connecting point for it all.”

Currently, the Mohawk district is a section of OTR that’s become vacant — one that once housed breweries. “I’m hoping that this will leverage bringing other businesses back on the street and in this little section,” Fay says.

She envisions the theater to be a multi-use facility for artists who could potentially use it after-hours for rehearsal space, recording, screening films — whatever they have in mind. But Fay doesn’t want to run the business by herself. She eventually wants it to be a nonprofit and wants to set up a board with a director.

The Imperial is the third antique theater in the neighborhood to recently draw attention. The Woodward Theater bounced back from the dead last year, and the Emery struggles to survive.

For this venture, the Cincinnati Center City Development Corporation (3CDC) is not involved at all.

“I would like to see more independently owned buildings so that somebody can move into it and live in it, own it, rehab it,” Fay says. “I’d like this to spin off more arts-related businesses or places for arts. It can be a wonderful, creative place.”
After witnessing the Emery’s issues, she learned from them what not to do. “Get a board together that’s local and that’s going to actually be people you can reach out and touch, and move on the essentials as quick as possible,” she says. “I don’t have some of the problems they obviously had.”

Fay doesn’t have a timeline to open the theater — she thinks even without air conditioning she can get two seasons out of the theater — but she does know getting the roof fixed is the priority. She wants to replace the neon lights with LED, and she’s in the process of identifying the silk-lined walls (she thinks the fabric was imported from France) and some of the other artifacts.

When suggesting this must be the most ambitious project Fay has ever tackled, she agrees. But if anyone can refurbish this place and return it to its glory days, Fay can. In 1991, she bought the building that houses Iris, and since then she’s rehabbed more than 40 OTR properties.

“I like the challenge of doing something new, doing something that I haven’t done before,” she says. “I like learning. So I’m anxious to learn how the furnaces worked back in the day, or how the air flowed through here.”
The Imperial Theatre just happens to be the key building in jumpstarting the area, so no pressure or anything.