There Will NOT Be a Bengals vs. Chiefs Watch Party at Paul Brown Stadium This Weekend

Even though the Bengals vs. Chiefs AFC Championship game takes place in Kansas City, there was a chance fans could have been in the stands at Paul Brown Stadium. 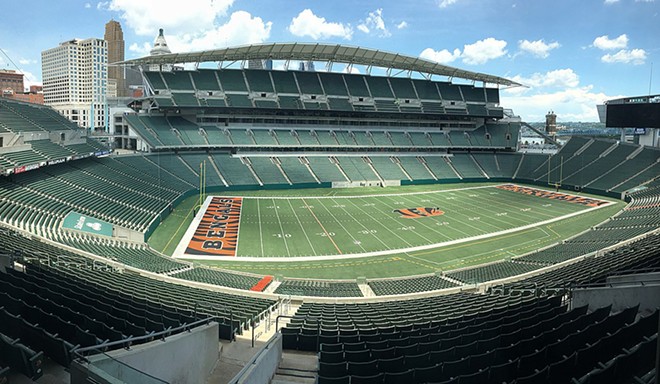 Even though the Cincinnati Bengals are playing the Kansas City Chiefs at Arrowhead Stadium during the AFC Championship on Sunday, there was a chance fans could still have been in the stands at Paul Brown Stadium for the game.

During a Hamilton County Board of Commissioners meeting on Tuesday, Commission Vice President Alicia Reece floated an idea she received from a constituent about hosting a watch party at Paul Brown Stadium.

"I had gotten a call from a constituent who wanted to see like they did in other cities, when they had these playoff games — these championship games — where they are in their stadiums if they can't make it to the location (of the game). And I did present that. I think it's a good thing," she said. "I know our administrators are working to see if that's something we can pull off."

Turns out the idea isn't something the county feels it can execute on such short notice.

A statement from Bridget Doherty, Communications Manager of the Hamilton County Administration, said the watch party wasn't feasible based on "uncertainty, time constraints, and numerous operational challenges including fan safety and staffing."

“The County cannot feasibly pull together all the logistics, for a (Paul Brown Stadium) watch party in time for this Sunday’s game," she said. "However, we will continue to work with all our partners including the Bengals, City of Cincinnati, the small businesses at The Banks, the fans, and others for a future way to continue the celebration."

Reece, on her part, said she disagreed with that thinking and was disappointed.

"I truly believe that with all hands-on deck, this could have become a reality this weekend like other major cities have hosted watch parties in their facilities," she said in her own statement. "This would have been huge for the fans and taxpayers to be able to have access and cheer on our team and could have also garnered national media attention."

She added that she had suggested Hamilton County start thinking about planning a Bengals Super Bowl watch party at the stadium.

"I am asking the administration to start now looking into the possibility of hosting a watch party for the Superbowl in Paul Brown stadium because I believe, that will be the next stop for our Bengals team. WHO DEY!” she said.

The AFC Championship will take place at 3:05 p.m. Sunday, Jan. 30, at Arrowhead Stadium in Kansas City. Fans can watch the game on CBS, Paramount + or NFL mobile options.

Kansas City was 12-5 during the regular season and lost to the Tampa Bay Buccaneers in last year's Super Bowl. The Bengals were 10-7 for the season and haven't seen the big game since 1989 when the team lost to the San Francisco 49ers.

If the Bengals beat the Chiefs, Cincinnati will play either the San Francisco 49ers or the Los Angeles Rams during the Super Bowl on Sunday, Feb. 13.

To get to this point, the Bengals beat the Tennessee Titans 19-16 in the AFC Divisional round on Jan. 22 with a magical walk-off field goal from Evan McPherson that further enhanced this squad's legendary status. Before that, the team had a can-you-believe-it victory over the Las Vegas Raiders in the Wild Card round on Jan. 15.

Hunt for Sasquatch with Professionals During Bigfoot Basecamp Weekend in Perrysville, Ohio