West Side Brewing — West Side Brewing has designed Pride cans for its Common Ale beer and is donating a portion of all proceeds to the Human Rights Campaign. Tapped and released June 12, the six packs and draft are a "tribute to the Greater Cincinnati LGBTQ Community," says the brewery, which is reinforcing its commitment to diversity, inclusion and exceptional beer. West Side Brewing, 3044 Harrison Ave., Westwood, facebook.com/westsidebrewing.

Condado Tacos — The Banks location of this Columbus-based taco chain is offering a Pink Pride Margarita for the month of June. The flavor is a blend of cherry, banana and strawberry with a candied lemon rim, and $1 from each will go toward the Trevor Project, a national nonprofit which provides suicide prevention services to LGBTQIA persons under 25. Condado Tacos, 195 E. Freedom Way, The Banks, condadotacos.com. 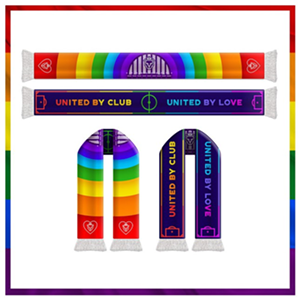 FC Cincinnati The Pride — FC Cincinnati’s official fan club, The Pride, is selling rainbow “United by Love” football scarves. All proceeds for the $20 scarves will go toward the Lighthouse Youth & Family Services’ “Safe and Supported” LGBTQ+ youth program. Order them at store.thepridecincy.com/item/pride-pride-scarf.

Revolution Rotisserie & Bar — Revolution is selling rainbow-colored logo tank tops at its Pleasant Ridge location and its booth at the Cincinnati Pride festival to raise money for the Cincinnati chapter of GLSEN, an education organization working to end the discrimination, harassment and bullying of children in schools based on sexual orientation, gender identity and gender expression. Revolution Rotisserie & Bar, 6063 Montgomery Road, Pleasant Ridge, revolutionrotisserie.com.