Misdirection and Deception Abound in 'These Photographs are Fake!' at Clay Street Press

Through Oct. 23, see deceptive and sardonic photographs from the early 1900s to 2014 that may just make you question everything. 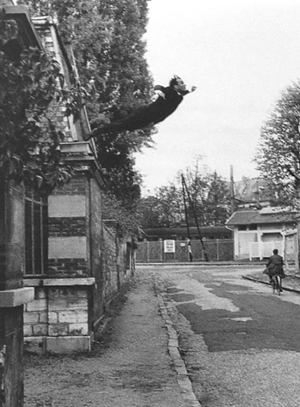 At its inception, photography was a medium that connoted truth: Light reflecting reality onto film and then the page. And long before photographs were manipulated and falsified for nefarious reasons, artists used the medium for deception in a more playful — if still often pointed — way. Which is where we find ourselves at the Clay Street Press exhibition, These Photographs are Fake!

On view through Oct. 23, the exhibition developed in conversations between Clay Street Press Director Mark Patsfall, photography collector and dealer Michael Lowe, and artist Peter Huttinger, who curated the exhibition.

“We share a passion for performance or conceptual projects,” says Huttinger. “But we were also very interested in ephemera — ways in which artists had used records, or film, or publications like newspapers as a vehicle — as installations, or what 20 years ago would have called interventions, now might be social practice.”

The direction of the show crystallized, says Huttinger, when he discovered that Lowe had an archive of a project at the Jean Freeman Gallery by Terry Fugate-Wilcox in his collection.

“It was a conceptual project that (Wilcox) had done in the ’70s that was a fake gallery. The piece was done through taking out ads in magazines and sending out exhibition announcements about this big project — and it never really existed,” says Huttinger. “But some of those fake artists that he created forecast, or were totally in line with, different projects that came to fruition (in reality) as major artworks, like Walter De Maria’s The Lightning Field.”

Looking at an initial grouping of works, says Huttinger, “We started thinking about this idea of misdirection and fraud, but also of it being used as a form of social critique in terms of sociopolitical issues.” Lowe also had an early print of Yves Klein’s A Leap Into the Void (which Huttinger describes as “probably the kingpin of all that work”), and things took off from there.

They ventured outside of the art world, strictly defined, too, and looked to popular culture and media. For instance: “that famous faux pas by TV Guide where they published a cover of Oprah Winfrey and superimposed her head on the body of (actress) Ann-Margaret,” says Huttinger. “Through that kind of play, we continued to explore this notion of what’s set up and what’s not, and to explore things that are bona fide art objects, some things that are not.”

With the scope of work presented — in origin, but also era, with pieces ranging from the early 1900s to 2014 — the viewer is able to make connections between. “Certain artworks were informed by earlier things,” says Huttinger. He adds: “One of the (changes over time) is the fascination with different techniques of photography.

"Today, a lot of this stuff would just be Photoshopped. But the Oprah Winfrey piece is actually a photo-realistic pencil drawing an illustrator based off of the 'best' photo of Ann-Margaret that they then superimposed or pasted in this photograph of Oprah Winfrey’s head. It’s a photograph but it’s a drawing but it’s a photograph — that layering just totally cracked me up.”

That freedom, Huttinger says, is why he so thoroughly enjoys “doing projects like this, whether it’s at The Carnegie or Clay Street Press, because we can be a lot more casual and experimental” than a museum setting allows. He notes the crucial role of scholarly research, but for his curatorial purposes, prefers small or alternative spaces, because, he says: “I want to create a conversation about this stuff.”

These Photographs are Fake! is on view at Clay Street Press 10 a.m.-4 p.m. Tuesday-Friday through Oct. 23. More info: claystreetpress.com

This story was originally published by FotoFocus' The Lens and republished here via an unpaid partnership with the arts nonprofit.