‘This Is Us’ — a Promising Dramedy

This new show seems to have all the elements of an effective family-centered dramedy, featuring strong writing, well-developed characters and an impressive ensemble cast.

It’s rare to find a “dramedy” — you know, the rapidly growing category of programs that contain as much serious drama as silly humor — with strong writing, well-developed characters and an impressive ensemble cast. But when it works, you end up with excellent shows like Transparent, Parenthood and Friday Night Lights.

It’s a little early to say whether This Is Us (10 p.m. Tuesdays, NBC) belongs in that company, but this new show seems to have all the elements of an effective family-centered dramedy. It even fills the old Parenthood time slot! 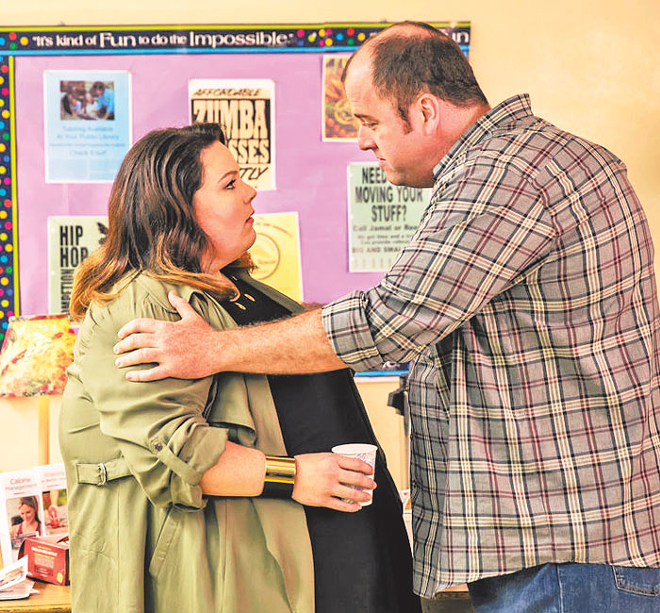 Photo: Ron Batzdorff/NBC
Chrissy Metz (left) and Chris Sullivan in "This Is Us"
This Is Us follows four storylines that eventually intersect: Married Pittsburgh couple Jack (Milo Ventimiglia) and Rebecca (Mandy Moore) embark on the journey of parenting in a very big way; Los Angeles personal assistant Kate (Chrissy Metz) recommits to the tough job of getting healthy in one of the better TV depictions of obesity and the issues faced by people who struggle with their weight; hunky actor Kevin (Justin Hartley) begrudgingly stars, often shirtless, in primetime sitcom The Manny (which reeks of a Two and a Half Men vibe); and Randall (recent Emmy winner Sterling K. Brown), a successful New York business/family man, decides to track down his long-lost biological father.

The pilot, which premiered Sept. 20, found Jack, Kate, Kevin and Randall each celebrating their 36th birthdays, but audiences didn’t see just how much more they had in common until a buzzed-about reveal at the end of the hour. (No spoilers!) The episode used this thread of a shared birthday to weave the storylines together, and “four people who share a common birthday are connected in unexpected ways” is a neat summary of what happened.

But don’t be turned off by the idea of some “spiritually linked strangers” gimmick. It’s simply a show about families — the ones we’re born into and the ones we create, and the work that goes into keeping those relationships afloat. Still, two episodes in, it’s clear the showrunner has a penchant for twist-endings.

Creator Dan Fogelman wrote the film Crazy, Stupid, Love — another heartstrings-pulling comedy whose characters intertwine in a surprising turn of events. (He’s also behind another new NBC show, Pitch.) He recently locked a full-season order of This Is Us, so we’ll get at least 18 episodes. I anticipate a success.

This Is Us is an emotional rollercoaster of a story with laughs and loss, perfect to watch while cozied up with a loved one or just a box of wine tissues. Besides, where else can you see the formerly sweet-as-“Candy” pop star Mandy Moore in old-lady drag?

In this week’s episode, Rebecca crosses paths with William, Kevin plans a move to New York and we get a glimpse of Jack and Rebecca’s first days as parents.

Unlocking the Truth (Season Finale, 11 p.m. Wednesday, MTV) – Quite a departure from the Teen Mom-like fare typical of the channel, this debut series exposed some of the real injustices in America’s criminal justice system. As the series winds down, Ryan and Eva interview Anastasia’s father and close their investigation of Kalvin Michael Smith.

Divorce (Series Premiere, 10 p.m. Sunday, HBO) – SJP is back on HBO! More than 12 years since Sarah Jessica Parker last appeared on the network in Sex and the City, she returns as one half of a couple (with Thomas Haden Church) forced to reevaluate their marriage.