We know the drill by now. 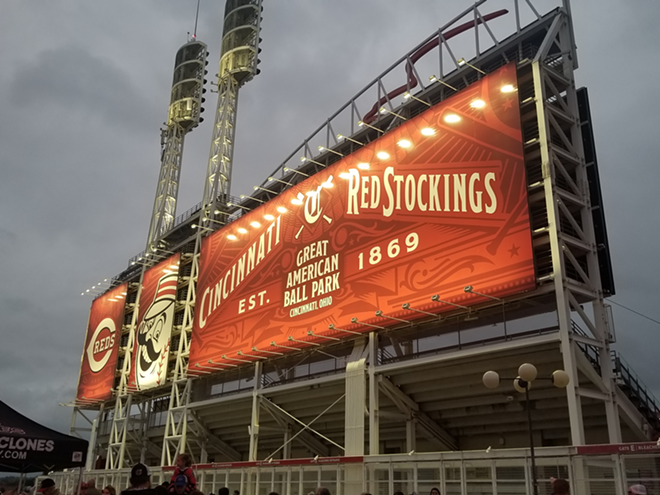 And elimination belongs to the Reds.

The Cincinnati Reds may have to change the popular #ATOBTTR ("and this one belongs to the Reds") hashtag now that the season is winding down. The Reds were mathematically eliminated from the National League Central Division race after a 5-1 loss to the Milwaukee Brewers on Sept. 10. Despite getting a big win the night before thanks to eight innings and 11 strikeouts from Nick Lodolo, the Reds' bats and arms just couldn't rustle up a gift on the injured Joey Votto's birthday.

Going into the Sept. 13 double-header, the Reds are 56-83 on the 2022 season, are 26 games behind the NL Central-leading St. Louis Cardinals and are not expected to make a Wild Card slot for the postseason. Even if the Reds were to win all 23 of their remaining games, the team still would be upside down on its win/loss record. Earlier this year, baseball experts had said that the Reds were on pace for a 125-loss season, the lowest for any team since 1900 (thanks, in part, to the franchise's worst start ever). The end result won't be quite that bad, but it won't be pretty either. This is what fans had warned against when team owners had cut payroll and traded prominent players before the season even began.

Postseason action has been hard to come by for the Reds. Cincinnati did not see any postseason play in 2021. During the COVID-shortened 2020 season, the Reds made it to the Wild Card playoffs but lost to the Atlanta Braves without scoring at all; before that, Cincinnati hadn't been to the postseason since 2013. The Reds have had just five winning seasons out of the last 15 – er, make that, 16, once 2022 wraps up.

But even though the Reds are putting up another postseason goose egg, there's still plenty of baseball goodness to be had. Below, check out three things to keep you busy as 2022 winds down.

The @Reds have been eliminated from the N.L. Central race.#ATOBTTR #MLB

Go to the park anyway

Playoff baseball is great, but there's beauty in the sport regardless of a championship chase (though, yeah, that would be nice). Nine innings of chess in a riverside park with meat cones for a snack? Sign us up. Great American Ball Park is one of the cheapest MLB stadiums to take a family of four, according to The Hustle. Besides, players are still performing. Lodolo has shown sizzle on the mound, outfielder Aristides Aquino has been in the highlight reels for homerun heroics and amazing fielding, and speedball rookie Hunter Greene is expected to rejoin the rotation this weekend after his rehab stint in Louisville. Plus, 2023 – and all the interleague weirdness that will come with it – is really only a few months away.


Listen for Votto in the broadcast booth

First baseman Joey Votto hasn't played since Aug. 16, thanks to surgery on his rotator cuff and bicep, but that doesn't mean he's far from the field. As one of the best interviewees anywhere, Votto continues to join broadcasters for game insights and plain-old tomfoolery. He recently talked to John Sadak and Cooperstown inductee Barry Larkin in the booth about everything from crafting a good swing to the view of the field to the ongoing retirement/victory lap for the St. Louis Cardinals' Albert Pujols, all while re-upping an old conversation about nipples that dugout reporter Jim Day would rather forget. Also, fans can vote for Votto to receive the Roberto Clemente Award.


Focus on the other sports

If you're too sad to stick with baseball but still need to cheer and jump, Cincinnati has a few other teams that would love to have some support. The Cincinnati Bengals – with Sports Illustrated cover boy Joe Burrow – began its regular season on Sept. 11 with a close loss to Rust Belt rivals the Pittsburgh Steelers, but the Super Bowl LVI runners-up have plenty of steam left for the newly named Paycor Stadium. FC Cincinnati notched a huge win over the San Jose Earthquakes on Sept. 10 and are unbeaten in the last nine matches. The Cincinnati Rollergirls also had a bout on Sept. 10 – their first in more than two years, thanks to the COVID-19 pandemic – and are looking forward to another on Oct. 8. Meanwhile, the Cincinnati Cyclones are gearing up for a new season on the ice in Heritage Bank Center in October, complete with cheap beer, jersey nights, bobblehead giveaways and fun themes.