Outdoor screenings take place in parks in Madisonville, Over-the-Rhine and Camp Washington throughout the month. 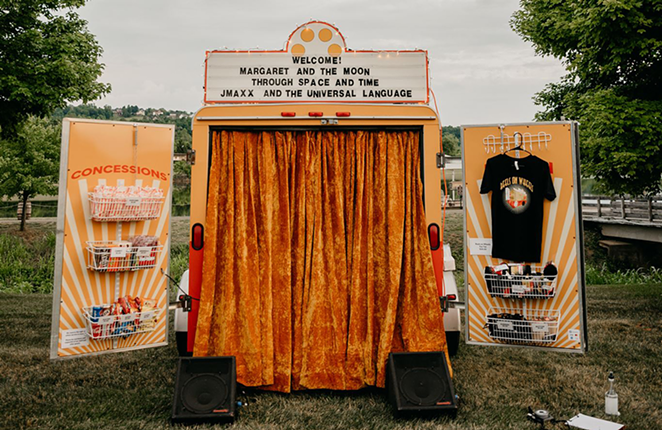 Since the start of the pandemic, the team behind Cincinnati’s Cindependent Film Festival has found ways to keep the spirit of independent films alive, even in the midst of pivots and postponements that have become a sobering reality for the arts and entertainment industry. For example, they launched “Cindependent and Chill” this year as a digital service that delivers new indie films every month to subscribers. Last year, they created Reels on Wheels, a screening series in which they present family-friendly short films from a mobile trailer at outdoor community spaces around Cincinnati.

This October, Reels on Wheels returns as Thrills on Wheels. Four outdoor screening events will take place throughout the month in Madisonville, Over-the-Rhine and Camp Washington. The series will feature family-friendly, independent short films that celebrate the Halloween season. Cindependent says the films are suitable for ages 6 and up.

“It’s going to offer our unique programming and outdoor cinema experience but be more in tune with the season. Modern campfire ghost story family fun. It’s also going to be a great way to enjoy the weather and our particularly unique cinema experience,” Reels on Wheels Program Manager Chris Potoka tells CityBeat.

Audiences can expect light concessions, movie theater popcorn and socially distanced, picnic-style seating. It’s “BYOC,” meaning “bring your own chair,” and pets are welcome. Film blocks will be shown at 7 p.m. and 8 p.m.

“Reels on Wheels launched as a response to the pandemic and has been able to grow and continue on since then, which seems an odd success story,” says Potoka, likening the mobile cinema to a traveling pop-up carnival. He adds that the reception from the community is always great and he enjoys seeing guests “go from curious and confused to completely onboard and excited within seconds of seeing the trailer.”

“We get people coming out in costumes and it’s so fun,” she says. “The weather is just so beautiful in October, it makes it so worthwhile to sit outside, have a drink, have hot cocoa. The cinema gets all decked out with spiders and spider webs, and the lights on top of the marquee turn orange. The experience is wrapped up in that.”

West, a passionate advocate for the independent filmmaking industry, says Cindependent — as an organization — has been able to meet this bizarre moment in time because of their team’s nimble size and community roots. “

“There’s a spontaneity to what we can do. There’s a lot of community-building to what we do. And there’s so much innovation,” she says. “Because we’re flexible, because we’re small, we can pivot. I’m looking at doing an outdoor film festival for 2022 — because our organization is so small, we really can’t bank on what might happen if we get canceled.”

At its core, Cindependent’s mission is to strengthen the local independent filmmaking structure while also educating the community about the media form and stimulating the Cincinnati economy. Its annual Cindependent Film Festival (which was canceled last year due to the pandemic) brings together those efforts through indie film screenings, industry networking events, topic-based discussions, workshops and other efforts to solidify independent film as an integral part of the region’s arts and culture scene.

Cindependent isn’t alone in that mission. They work closely with the Esquire Theatre in Clifton to create and host events. Julianne Reisenfeld, vice president of operations for Esquire’s Theatre Management Corporation, says their relationship is “very symbiotic.”

“Cindependent’s mission is to create a home for independent filmmaking in Cincinnati, and the Esquire Theatre prides itself on providing a place for Cincinnati moviegoers to view independent films and those films that might not otherwise find an audience,” says Reisenfeld.

The Esquire is currently working with Cindependent to host “single-fest” screening events that feature more complex and mature films.

West says, “We get hundreds and hundreds of films a year, and at this point, we can really focus on what’s the best, most innovative, most cutting-edge storytelling there is.”

Through events like Reels on Wheels and re-imagined film fests at the Esquire, Cindependent and their collaborators in the community — including the Black Cincinnati Cinema Collective (B3C) and Women in Film (WIF) Cincinnati — appear to be redefining the moviegoing experience in the Queen City and keeping the spotlight on independent filmmaking.

See for yourself with Thrills on Wheels. Remaining screenings take place Oct. 29 at Bramble Park in Madisonville, Oct. 23 at Grant Park in Over-the-Rhine and Oct. 30 at CampSITE Sculpture Park in Camp Washington.

For more about Thrills on Wheels or Cindependent, visit cindependentfilmfest.org.