From pick-your-own pumpkin patches and haunted houses to a giant mum display and the Great Outdoor Weekend, get ready to embrace fall in the Queen City with these 13 events.

It is officially fall in Cincinnati, which means it's time for pumpkin patches, haunted houses and outdoor adventures of the season.

Break out your comfy sweater, find yourself some apple cider and peruse this list of 13 things to do this weekend.

Greater Cincinnati Restaurant Week continues through this Sunday and features more than 40 Tri-State restaurants offering $26, $36 and $46 three-course prix fixe menus. Dine-in and limited take-out options are available. This year, $1 from every meal will be going directly to Cincinnati Children’s and CityBeat, the producer of Greater Cincinnati Restaurant Week, will match the first 1,000 meals. For more information about the event and to view the menus, visit greatercincinnatirestaurantweek.com.

Enjoy the spooky season at Kings Island's fall festival. Enjoy food, activities, live entertainment, more than a dozen trick-or-treat stops, costume contests, crafts, games, seasonal merchandise and so much more. All of the park's rides and attractions are open during the fall event (except for water attractions). 11 a.m.-noon Saturdays and 11 a.m.-8 p.m. Sundays from Sept. 25-Oct. 31. visitkingsisland.com.

According to legend, the bodies of several missing Dent Schoolhouse students were discovered in barrels in the building’s basement — and the janitor did it. Housed in an actual public school, Dent offers real ghost tours and lights-out experiences for those looking for a true fright, plus lights-on tours for kids and wimps. The open-air Queen City Slaughter Yard behind the school is back this year and included with admission. Saturday and Sunday tickets are sold in time slots: 7:30-9:30 p.m. or 10 p.m.-midnight. Through Nov. 6. $20-$25 general admission; +$20 fast pass; +$30 front of the line. 5963 Harrison Ave., Dent, frightsite.com. If you don't want to do Dent, there are 9 other haunted houses open in Cincinnati this Halloween season.

Blooms & Berries Farm Market in Loveland is hosting a special fall event aimed at dogs and their people. While humans enjoy all the fun of the farm's fall festival — including a corn maze, hayrides, sunflower fields and more — pups get their own special treatment with a doggy bag filled with a bandana, a treat, a whipped cream pup-cup and access to a "Sniffari Adventure." Bring your dog with you into the corn maze, where Blooms & Berries has set up checkpoints with "fun and unique smells" along the Sniffari. As the Pups, Pints & Pumpkins names suggests, there's also a beer garden and a pumpkin patch. 5-8 p.m. Sept. 24. Timed entry tickets are $4.95 per dog and $12.95 per human. 9669 S. State Route 48, Loveland, bloomsandberries.com.

Ensemble Theatre Company picks up where it left off after March 11, 2020, the night it opened Dominique Morisseau’s Pipeline. That was the show’s single performance, cut short by COVID-19 restrictions. Its set has remained on ETC’s stage since then. And now Pipeline is back onstage with just one cast change, restarting ETC’s season with a four-week run. Pipeline is the story of a Black teacher and divorced mother trying to protect her bright, sensitive son who’s been acting out in high school and is at risk of entering the “pipeline” toward crime and incarceration. Through Oct. 16. $55 adults; $29 students; $27 child.1127 Vine St., Over-the-Rhine, ensemblecincinnati.org. Read CityBeat critic Rick Pender's review of Pipeline.

The 18th-annual Great Outdoor Weekend is offering more than 100 free activities across area parks, rivers, trails and more. Presented by regional sustainability alliance Green Umbrella and partner organizations, adults and kids alike can expect to partake in events ranging from rooftop yoga at Rhinegeist to free pedal boat rentals at Miami Whitewater forest and a butterfly walk at Woodland Mound to "competitive bird-watching" at Grailville. Sept. 25-26. Free. See a full calendar of events at greatoutdoorweekend.org.

A local celebration of Jewish and Israeli culture, ish Festival will mark the start of this year's Jewish Cincinnati Bicentennial celebration. The festival at Washington Park offers two days of art, food vendors and live music, per a release. The 2021 event will be ish Festival's third biennial celebration, with its inaugural festival held in 2017. The 200th anniversary recognizes the 1821 founding of Chestnut Street Cemetery in the West End as the emanation point for the beginning of Cincinnati’s Jewish community. Organizers say this year's theme, "From Generation to Generation," nods to this legacy. The festival will feature inclusive and culturally diverse programming for all ages, including an opening performance by famed American-Jewish artist Matisyahu 6 p.m. Saturday. 6-11 p.m. Sept. 25; 11 a.m. Sept. 26. Matisyahu tickets cost $36-$180. Washington Park, 1230 Elm St., Over-the-Rhine, facebook.com/ishfestival. 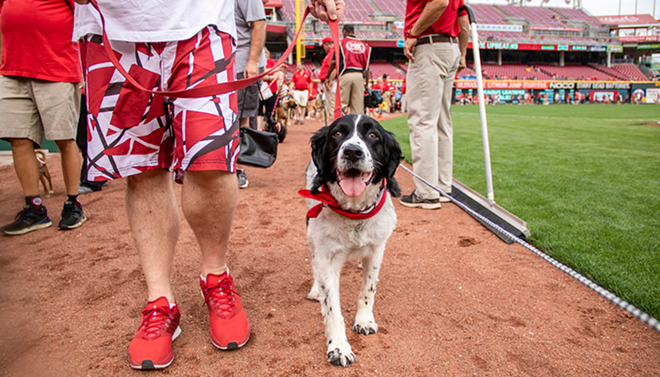 Photo: Provided by the Cincinnati Reds
Bark in the Park

Bark in the Park

The Cincinnati Reds are welcoming their furry, four-legged fans to the stadium this Saturday for a special Bark in the Park event. While previous Bark in the Parks events invited dogs into the actual stands to watch the game, this weekend's new take focuses on a morning pet parade around the warning track at Great American Ball Park, plus a Pet Expo and a professional photo op at home plate. Starting at 10 a.m., good, leashed dogs that are up-to-date on their shots can line up at Gate I outside the stadium. Each dog must be accompanied by at least one human, and owners must sign a liability waiver before entering Great American Ball Park (it's available to print online). 10 a.m.-noon Sept. 25. $25; includes a ticket to one of the Reds vs. Nationals games held Sept. 23-26. Dogs are not permitted at these games, only people. Great American Ball Park, Gate I, Joe Nuxhall Way and Mehring Way, Downtown, mlb.com.

For much of the past two decades, Erika Wennerstrom’s musical identity has been exemplified by the Cincinnati-spawned, now-Austin-based entity known as the Heartless Bastards. Since the band’s formation in 2003, the Bastards have been known for their blistering performances, with Wennerstrom as the ferociously intense focal point and lead singer, captivating audiences with her unique guttural purr-n-growl. The Heartless Bastards’ sixth studio album, A Beautiful Life, dropped Sept. 10 on Sweet Unknown Records/Thirty Tigers. Hear new and old tunes at this local stop. 7 p.m. doors Sept. 25. $20 advance; $22 door. Madison Theater, 730 Madison Ave., Covington, madisontheater.com.

Dawes at the Taft Theatre

Los Angeles-based Folk Rockers Dawes are bringing its new "Good Luck With Whatever Tour" to the Taft Theatre. Erin Rae opens. Good Luck With Whatever is the band's seventh studio album, described in a release as "Dawes at their most unapologetic. It’s sympathetic and magnetic, 50% genetic and highly kinetic." Fans must show proof of vaccination or have received a negative COVID test 72 hours before the concert to attend. 7 p.m. Sept. 26. $35-$45. 317 E. Fifth St., Downtown, tafttheatre.org.

Mounds of Mums at Krohn Conservatory

Krohn Conservatory is celebrating the season with its Mounds of Mums floral show. The display includes mums, asters, succulents, lavender and rosemary, as well as "crevice gardens" inspired by the Czech Republic. Krohn says, "In a crevice garden, flat rocks are placed vertically in the ground, parallel to each other, thus creating a unique look much different from a traditional rock garden. Crevice gardens are considered a type of xeriscape and are particularly popular with alpine plant collectors." Through Oct. 17. $10 adults; $7 ages 5-17; free 4 and under. 1501 Eden Park Drive, Eden Park, cincinnatiparks.com.

Pyramid Hill Art & Sculpture Park in Hamilton is hosting its 19th-annual Art & Music Festival this weekend. The art show features more than 70 artists and vendors, selected by a jury, set up across the park's outdoor expanse. There will also be live music throughout the weekend, including bands 500 Miles to Memphis, Queen City Silver Stars and the Butler Philharmonic Orchestra. Other activities include yoga, painting workshops and puppet shows, as well as a beer garden and food trucks. Pyramid Hill says more than 2,700 attended the event in 2020. 11 a.m.-8 p.m. Sept. 25; 11 a.m.-4 p.m. Sept. 26. $10 per car; $15 weekend pass. 1763 Hamilton Cleves Road, Hamilton, pyramidhill.org/art-music-festival.

*The first version of this story listed Newport Oktoberfest as a thing to do this weekend. That festival has been canceled due to a worker shortage.